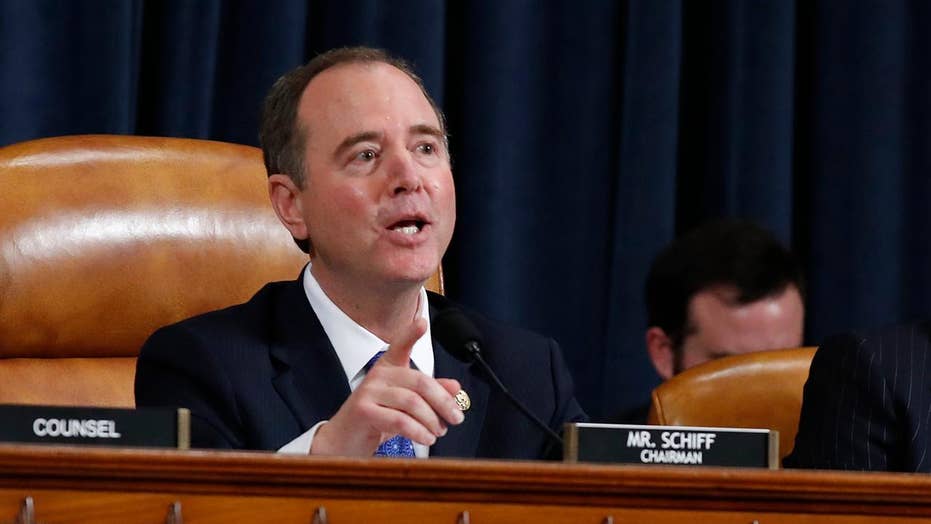 House Intelligence Committee Chairman Adam Schiff closed the fifth day of public hearings in House Democrats' impeachment inquiry with a fiery speech, saying among other things that President Trump considers himself "above the law” and “beyond accountability.”

“In my view there is nothing more dangerous than an unethical president who believes they are above the law,” Schiff, D-Calif., said, referring to the claim that Trump pushed Ukraine to investigate political rival Joe Biden and withheld military aid as an incentive.

“We are better than that,” Schiff concluded as he struck a gavel in dramatic fashion.

Schiff also slammed Republican arguments, saying it was "clear to everyone" that aid was withheld from Ukraine on the condition of opening investigations into former Vice President Joe Biden and his son Hunter.

Furthermore, he said Republicans' chracterization of testimony in the impeachment hearings as "hearsay" is "absurd."

"That would be like saying you can't rely on the testimony of the burglars during Watergate because it's only hearsay,” he said. “Or you can’t consider the fact that they tried to break in because they got caught. They actually didn’t get what they came for so no harm no foul. That’s absurd.”

Schiff’s remarks came as Democrats and Republicans on the House Intelligence Committee made their closing arguments to wrap up the final impeachment hearing of the week. It may, in fact, have been the final hearing in the Houe impeachment inquiry before the matter is turned over to the chamber's Judiciary Committee.

In his 20-minute speech, Schiff laid out what the committee has learned over the course of seven hearings on President Trump’s conduct with Ukraine, including details about the smear campaign against a “dedicated public servant,” former U.S. Ambassador to Ukraine Marie Yovanovitch, and Trump's desire to have Ukraine investigate Ukrainian natural gas company Burisma Holdings and the Bidens.(Hunter had a seat on the company's board.)

“He [Trump] has to smear and destroy those who get in his way and someone fighting corruption in Ukraine was getting in his way so she’s [Yovanovitch is] gone,” Schiff said Thursday.

He said Democrats will have to examine “what is our duty” as they decide on next steps.

California Rep. Devin Nunes, the top Republican on the panel, called the hearings “a show trial” and said they had a pre-determined verdict.

Trump, who calls Schiff “the most dishonest man in politics,” has repeatedly blasted the lawmaker.

On Wednesday, Trump called Schiff as a "corrupt politician," telling reporters the congressman "stands up and he tells lies all day long. .. We have no due process."

On Thursday, the president directly attacked the congressman on Twitter. "No pressure on Ukraine," he said, referring to allegations of a quid pro quo. "Great corruption & dishonesty by Schiff on the other side!"

Schiff has accused Trump of engaging in a quid pro quo in pushing for Ukraine to investigate Burisma, the Bidens, and allegations that Ukraine, and not Russia, had attempted to meddle in American elections in 2016.

Schiff said Trump's actions were a "conditioning of official acts for something of great value to the president. These political investigations -- it goes right to the heart of the issue of bribery as well as other potential high crimes or misdemeanors."

A statement from Tim Murtaugh, Trump 2020 communications director,  released Thursday said, “Adam Schiff has turned the House Intelligence Committee into an arm of the Democratic National Committee, and despite that has managed to produce no evidence at all that President Trump did anything wrong.”