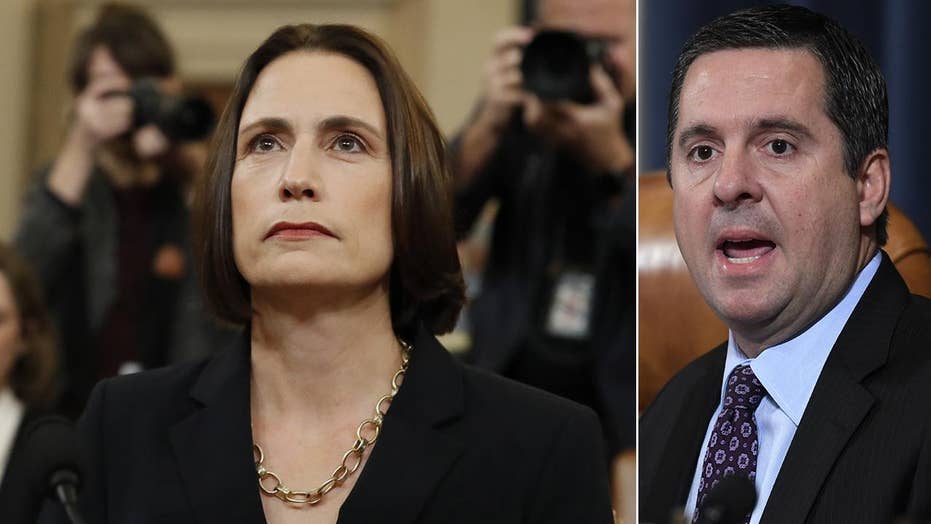 Fiona Hill, a Russia expert who served on President Trump's National Security Council, told House lawmakers on Thursday that she obtained the controversial Steele dossier just a day before it surfaced in the media.

Despite Hill's previous work with Steele, she said she had no knowledge of the dossier before Strobe Talbott, the former president of the Brookings Institution, provided it to her. Talbott, she said, had received a copy of the dossier. It's unclear how he obtained the dossier, which sparked a media firestorm after BuzzFeed released it in 2017.

Hill, who previously worked at Brookings, was testifying before the House Intelligence Committee as part of House Democrats' broader probe into the president's July 25 call with Ukraine. Rep. Devin Nunes, R-Calif., had asked Hill about her relationship with Christopher Steele, the former British spy whose allegations fueled the Russia investigation.

Hill previously served under former Presidents Barack Obama and George W. Bush's administrations. She left the Trump administration in August 2019. According to Hill, Steele was her counterpart whom she met with in 2016 and in prior years. When asked for specific dates, Hill said she didn't remember. She also characterized the dossier as a "rabbit hole."

Hill told Nunes that she wasn't aware of who funded the dossier at the time she initially saw it.

Earlier in November, she testified that she had “misgivings and concern that [Steele] could have been played."

The British-born Hill is a Russia expert who’s written extensively on the Kremlin, and she made that clear from the outset when she scolded Republican lawmakers for propagating what she said was a “fictional narrative” — that somehow Ukraine, not Russia, interfered in the 2016 U.S. presidential election.

"I refuse to be part of an effort to legitimize an alternate narrative that the Ukrainian government is a U.S. adversary and that Ukraine—not Russia—attacked us in 2016," she said.

The transcript of Trump's July 25 call with Zelensky shows Trump asking for a “favor” in the form of Ukraine providing information about the hacking of the DNC server in 2016. He referenced CrowdStrike, a cyber firm used by the DNC to investigate the attacks.

Hill acknowledged in her testimony that her comments were in reference to those allegations.

“These fictions are harmful even if they are deployed for purely domestic political purposes,” Hill said, adding "if the president, or anyone else, impedes or subverts the national security of the United States in order to further domestic political or personal interests, that is more than worthy of your attention."