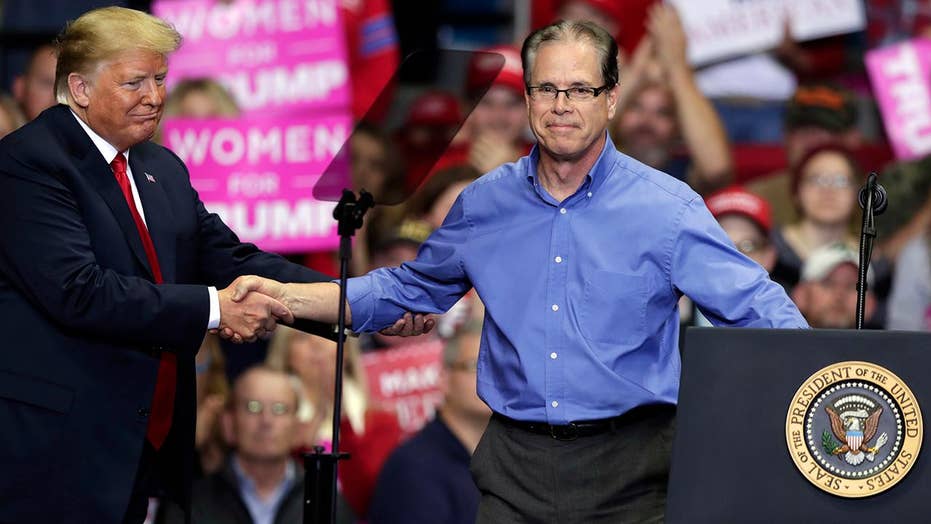 Can Republicans ride the Trump bump through the midterms?

Americans across the country are taking to the voting booths Tuesday for the 2018 midterm elections.

From potentially close battles in the House to the fate of important ballot measures, there’s a lot at stake for both parties -- Democrats are hoping to take back control of one or both chambers of Congress.

While America prepares for what could be a long night of returns, here’s a look back at some of the closest congressional races in the past 50 years.

An automatic recount was set off when Coleman led Franken by 206 votes on election night, The Washington Post previously reported. Nearly 3 million votes were cast in total.

Following the recount, Franken was declared the winner, but Coleman contested the results. This ultimately led to a lengthy legal battle which ended with the Minnesota Supreme Court deciding Franken was the victor.

WHAT TIME DO POLLS CLOSE ON ELECTION DAY? A STATE-BY-STATE GUIDE

Coleman conceded in June 2009 and Franken was sworn in the following month.

A mandatory recount was triggered in Connecticut when the 2006 Democratic Congressional candidate Joe Courtney led incumbent Republican Rep. Rob Simmons by less than half a percentage point, the New York Times reported at the time.

Following the recount, Courtney was declared the winner by less than a hundred votes.

“I’m disappointed by the outcome, but not by the effort,” Simmons said after conceding, according to the New York Times.

The 2006 election marked the second time the two faced off, the first being in 2002 when  Simmons defeated his opponent  54 percent to 46 percent and moved to his second term.

The 1986 race marked the second time Howard Coble had defeated Britt; the first time was two years prior in 1984. (Getty)

In a close U.S. House of Representatives race, Republican Rep. Howard Coble of North Carolina defeated his Democratic opponent Rep. Robin Britt in 1986 by 79 votes, according to the Washington Post.

The race marked the second time Coble had defeated Britt; the first time two years prior in 1984. Coble held the seat until 2015.

In 1984, Democratic Candidate Frank McCloskey ran against state Rep. Rick McIntyre, a Republican, for a U.S. House of Representatives seat.

In what the New York Times called “the closest House race of the Nov. 6 election,”  McCloskey eventually won the race -- but not before a series of contentious recounts.

An initial recount had McIntyre leading the Democrat by 418 votes, according to NPR. But a recount led by the Democrat-controlled House concluded McCloskey had won by four votes.

The House eventually voted to seat McCloskey, but Republicans held a walkout in protest -- which  Brian Vargus, a political science professor at Indiana University-Purdue University Indianapolis, told the Huffington Post in 2010 was led by former Republican House Speaker Newt Gingrich.

“One could argue that was what first brought Newt Gingrich to national attention,” Vargus told the publication. “He led a walkout of Republicans to try and unseat McCloskey.”

The face-off is considered to be the closest U.S. Senate election in history. (Getty)

In what is considered the closest U.S. Senate election in history, Republican Louis C. Wyman battled for an open seat against his Democratic opponent John A. Durkin who, after a lengthy and intense battle, would eventually become the victor following a special election.

In the initial election, “the expected Republican landslide failed to materialize as Wyman's lead dwindled to a mere 355 votes out of more than 200,000 cast,” according to the U.S. Senate. Durkin subsequently called for a recount, which found that the Democrat had won by a slim 10 votes.

Durkin was given a provisional certificate of election by then-Republican Gov. Meldrim Thomson. But the certificate was rescinded and given to Wyman after the state ballot commission held a recount and concluded the Republican had won by two votes.

Following more back-and-forth between the two sides, which included a Senate review of the case, a special election in September 1975 “gave Democrat John Durkin a convincing victory by a margin of more than 27,000 votes,” according to the U.S. Senate.

“The real winners, however, may have been the Senate’s Republicans” as “this contest unified their ranks and, as some believed, gave them invaluable tactical experience in dealing with an overwhelming Democratic majority,” the body also noted.

ELECTION DAY BALLOT SELFIES: HERE'S WHERE IT'S LEGAL AND ILLEGAL

The U.S. Supreme Court ruled in a 5-4 vote that Bush was the victor in the 2000 presidential election. (Getty)

Though not a congressional election, the 2000 presidential race between George W. Bush and former Vice President Al Gore must be noted.

Bush, then the governor of Texas, ultimately won the presidency by winning in the Electoral College, though Gore won the popular vote with 50,999,897 votes to his opponent's 50,456,002.

The election’s final results came down to Florida and were close enough to warrant a recount.

Eventually, the U.S. Supreme Court decided in a 5-4 vote that Bush had indeed won the state’s electoral votes and subsequently declared him the president-elect prior to his inauguration in January 2001. According to the Khan Academy, a non-profit organization that focuses on education, the presidential election was the first the Supreme Court ever decided and was the “closest in the history of the U.S. Electoral College.”