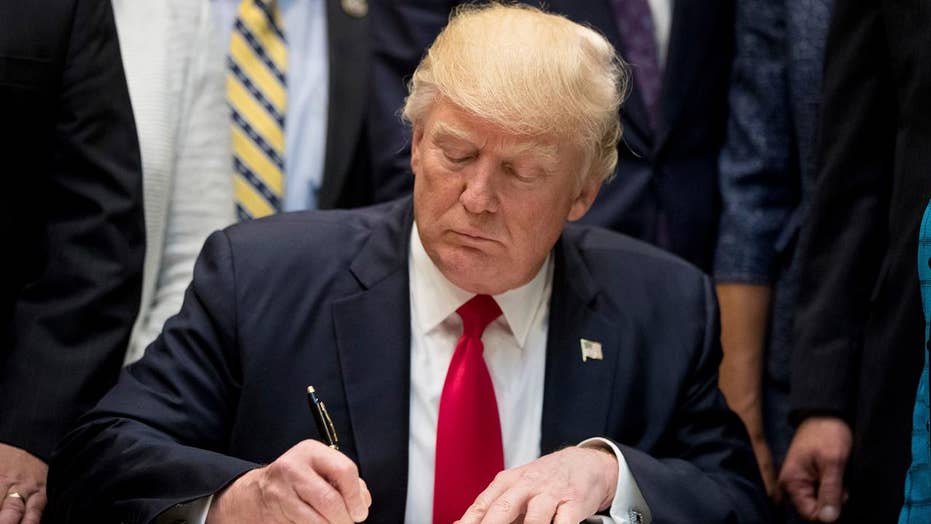 With Donald Trump on the verge of clinching the Republican nomination, Sarah Palin stood in front of a San Diego crowd in May 2016 searching for a worthy way to describe just how politically earth-shaking his transition was from real estate magnate to party standard-bearer.

Then she found her phrase: “He was like a golden wrecking ball,” Palin said. “He wrecked what needed to be wrecked … in order to allow us to rebuild.”

Nearly a year since, and at the “100 days” mark of his administration, President Trump has brought that “wrecking ball” to Washington – tearing up the usual script for early presidencies by installing controversial outsiders in top posts, shunning political orthodoxy and signing a slew of executive orders in a bid to speedily wash away the legacy of his predecessor. He uses social media like no president before to directly speak to voters, often setting the day’s news cycle with pre-dawn tweets. He gets personally involved in defense contracts. He openly needles U.S. allies, in hopes of a better “deal” – on NAFTA, NATO and more.

His presidency, like his former reality show, has become a must-see event. And if the first 100 days are any gauge, the Trump effect will render Washington a nonstop, unpredictable political battle zone for the rest of his term. Politics, and the presidency, may never be the same.

D.C., after all, has wrecked back.

Several of Trump’s more ambitious initiatives have met with full-on revolts from Democrats in Congress and disparate judges across the country, dealing the Donald numerous blows early on. Protests in the nation’s capital are a routine affair.

The constant action, whether it produces successes or setbacks, has seemingly given Trump and his legion of like-minded disrupters a quick education in what awaits them. It’s a stunning lesson for someone who once told The New York Times he didn’t see much of a difference between his success in business and potential political victories.

Trump may be moderating, but his early months had all the hallmarks of the disrupter-in-chief.

Trump’s first week involved a flurry of activity – withdrawing the U.S. from the Trans-Pacific Partnership trade deal; allowing the completion of the Dakota Access pipeline and the construction of the Keystone XL pipeline; penalizing so-called “sanctuary cities” by denying federal funds. (The latter is now on hold by the courts.)

Trump may have benefited for a time from opponents still shell-shocked by his upset victory over Democrat Hillary Clinton, as he pushed his nationalist-populist agenda into action. However, the self-described “resistance” fully rallied when on Jan. 27 Trump signed an order temporarily banning travel by non-U.S. citizens from seven Muslim-majority countries. Protests sprung up in airports around the nation and federal judges blocked the order.

“If you think they’re going to give you your country back without a fight, you are sadly mistaken,” White House chief strategist Stephen Bannon told the crowd at the Conservative Political Action Conference in February. “Every day, it is going to be a fight.”

And so Trump continued hammering away at Bannon’s termed “deconstruction of the administrative state” – if at a slightly less frenetic pace than had previously been attempted.

He nominated and saw confirmed to the Supreme Court Justice Neil Gorsuch, largely viewed as a reliable conservative vote to help swing the court rightward, and issued a revised, less overbroad travel ban (which was again protested and blocked in the courts).

All the while, Democrats worked to derail his plans.

An investigation into alleged Russian meddling in the U.S. presidential election ensnared his national security adviser, Michael Flynn, ultimately resulting in Flynn’s February firing for lying to Vice President Mike Pence. Attorney General Jeff Sessions was caught up in the heavily politicized probe, too. Sessions ultimately recused himself from any subsequent investigation; however, the media storm enveloping his AG had overshadowed Trump’s well-received Feb. 28 address to Congress.

And perhaps his biggest defeat came when the “golden wrecking ball” couldn’t crack the Freedom Caucus.

Repealing ObamaCare had been at the top of the Republican priority list for four election cycles, and Trump had campaigned on replacing the unpopular legislation. But his team handed off writing the details to House Speaker Paul Ryan, and the eventual bill was highly unpopular with the American public, conservative media and various factions in the House of Representatives. Still, it appeared Trump and Ryan could pull out a win if they managed to convince the members of the House Freedom Caucus to vote for the bill. Trump, who routinely boasted about his ability to make deals, tried both sweet-talking and, more so, strong-arming the members along. Neither approach worked. Just before it was set to be introduced for a vote that would have been an embarrassing failure, Trump, on Day 64 of his presidency, instructed Ryan to pull the bill.

Given the humbling defeat in Congress, the daily whispers regarding Russia and the snowballing opposition to signature policies, Day 64 may have been the low point of Trump’s first 100 days.

It was also the point at which Trump adapted and changed the narrative.

He laid low for a few days (by Trumpian terms), but by Day 73 the constant disrupting and disruptions seemed to have gotten old.

The dealmaker-in-chief emerged, with Trump taking Sen. Rand Paul on a golf outing to discuss health care; holding back on plans to label China a currency manipulator in exchange for their help dealing with North Korea’s nuclear ambitions; appearing to relent on some hardline budget positions in order to prevent a government shutdown; unveiling a vague yet ambitious tax plan that appeals to much of his constituency and leaves plenty of room for congressional haggling.

Trump was also seen in an entirely new light – commander-in-chief – when he launched a strike on a Syrian airfield that had been used to carry out a chemical weapons attack on the Syrian people; when he ratcheted up the U.S. military posture against Kim Jong Un’s dictatorship; when he started criticizing Russia; when he presided over the dropping of the so-called “Mother Of All Bombs” on ISIS militants in Afghanistan.

The first 100 days have been a densely packed period of on-the-job learning for Trump, seeing him move from an unaccommodating swamp drainer to someone resigned to skimming the muck out of the water.

More opportunities for change and disruption await, and he still aims to replace ObamaCare soon.

Trump’s most identifiable campaign promise was his vow to build a “big, beautiful” wall on the U.S. border with Mexico. But the inclusion of money to build that wall potentially could have led to a government shutdown due to Democratic opposition. Trump ultimately decided to concede the cash allocation in April with plans to fight for the funds another day.

It’s unclear what form the “golden wrecking ball” will take by then.