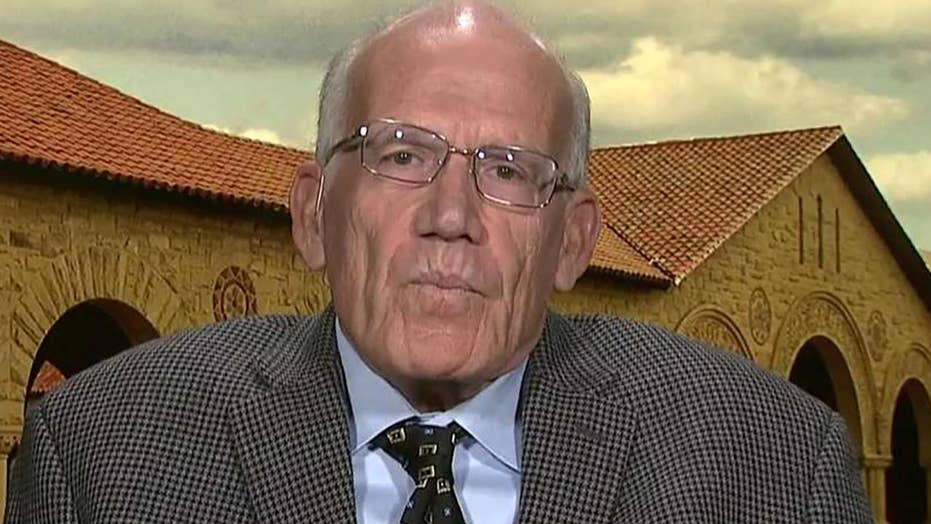 Victor Davis Hanson: Our ancestors were fearless builders and pioneers. Today we delay, idle and gripe

Members of previous generations now seem like giants. When did we become so small?

Many of the stories about the gods and heroes of Greek mythology were compiled during Greek Dark Ages. Impoverished tribes passed down oral traditions that originated after the fall of the lost palatial civilizations of the Mycenaean Greeks.

Dark Age Greeks tried to make sense of the massive ruins of their forgotten forbearers’ monumental palaces that were still standing around. As illiterates, they were curious about occasional clay tablets they plowed up in their fields with incomprehensible ancient Linear B inscriptions.

We of the 21st century are beginning to look back at our own lost epic times and wonder about these now-nameless giants who left behind monuments that we cannot replicate, but instead merely use or even mock.

ANCIENT GREEK THRONE ROOM MAY HAVE BEEN DISCOVERED IN GIANT PALACE

Does anyone believe that contemporary Americans could build another transcontinental railroad in six years?

Californians tried to build a high-speed rail line. But after more than a decade of government incompetence, lawsuits, cost overruns and constant bureaucratic squabbling, they have all but given up. The result is a half-built overpass over the skyline of Fresno — and not yet a foot of track laid.

Who were those giants of the 1960s responsible for building our interstate highway system?

California’s roads now are mostly the same as we inherited them, although the state population has tripled. We have added little to our freeway network, either because we forgot how to build good roads or would prefer to spend the money on redistributive entitlements.

When California had to replace a quarter section of the earthquake-damaged San Francisco Bay Bridge, it turned into a near-disaster, with 11 years of acrimony, fighting, cost overruns — and a commentary on our decline into Dark Ages primitivism. Yet 82 years ago, our ancestors built four times the length of our singe replacement span in less than four years. It took them just two years to design the entire Bay Bridge and award the contracts.

Our generation required five years just to plan to replace a single section. In inflation-adjusted dollars, we spent six times the money on one-quarter of the length of the bridge and required 13 agencies to grant approval. In 1936, just one agency oversaw the entire bridge project.

California has not built a major dam in 40 years. Instead, officials squabble over the water stored and distributed by our ancestors, who designed the California State Water Project and Central Valley Project.

Contemporary Californians would have little food or water without these massive transfers, and yet they often ignore or damn the generation that built the very system that saves us.

America went to the moon in 1969 with supposedly primitive computers and backward engineering. Does anyone believe we could launch a similar moonshot today? No American has set foot on the moon in the last 47 years, and it may not happen in the next 50 years.

Our writers, directors and actors have lost the skills of their ancestors. But they are also cowardly, and in regimented fashion they simply parrot boring race, class and gender bromides that are neither interesting nor funny. Does anyone believe that the Oscar ceremonies are more engaging and dignified than in the past?

We have been fighting in Afghanistan without result for 18 years. Our forefathers helped to win World War II and defeat the Axis Powers in four years.

In terms of learning, does anyone believe that a college graduate in 2020 will know half the information of a 1950 graduate?

In the 1940s, young people read William Faulkner, F. Scott Fitzgerald, Pearl Buck and John Steinbeck. Are our current novelists turning out anything comparable? Could today’s high-school graduate even finish “The Good Earth” or “The Grapes of Wrath”?

True, social media is impressive. The internet gives us instant access to global knowledge. We are a more tolerant society, at least in theory. But Facebook is not the Hoover Dam, and Twitter is not the Panama Canal.

As we walk amid the refuse, needles and excrement of the sidewalks of our fetid cities; as we sit motionless on our jammed ancient freeways; and as we pout on Twitter and electronically whine in the porticos of our Ivy League campuses, will we ask: “Who were these people who left these strange monuments that we use but can neither emulate nor understand?”

In comparison to us, they now seem like gods.