The American flag fluttered high atop its staff at the base of the Dome on the West Front of the U.S. Capitol when I arrived there Thursday morning.

When I departed Thursday evening, the flag hung limp, lowered to half-staff.

At least 13 U.S. service members perished in Afghanistan during my time inside the building. At least 13 lives and families, shattered, all in a matter of hours -- in service to the United States and the international community.

Those who toil inside the Capitol didn’t quite know what to do with the news of the attacks. The politics of the massacre are complicated. Bipartisan-minded lawmakers called for the Biden administration to extend the U.S. mission in Afghanistan beyond next Tuesday.

But that could expose the U.S. to other disasters. Truncate the mission, and the U.S. looks weak. Lots of Democrats who supported ending the mission in Afghanistan found themselves calling for an extension of the mission. Republicans who embraced the decision of former President Trump to leave Afghanistan now criticized President Biden for yanking the troops.

The American flag at half-staff outside the U.S. Capitol on Thursday, after the deadly attack in Afghanistan. (Chad Pergram/FOX NEWS)

Democrats walked a fine line. While they seethed inside, they were careful to focus on the tragedy of the American losses and the mounting humanitarian crisis in Kabul – rather than publicly challenge Biden.

Lawmakers and congressional aides could feel the temperature climbing in Afghanistan, days ago, even a half-world away.

And yet, there wasn’t a lot that people at the Capitol could do when things went to hell in Kabul.

The sting was especially brutal for lawmakers and staff who scrambled for days to extract Americans – as well as Afghans who assisted the U.S. from Afghanistan.

The phones exploded. Email erupted. They were on Signal. WhatsApp. They used every mode of communication except ship-to-shore and semaphore to locate individuals, get documents in order, and hustle them to the Abbey Gate at Hamid Karzai International Airport. 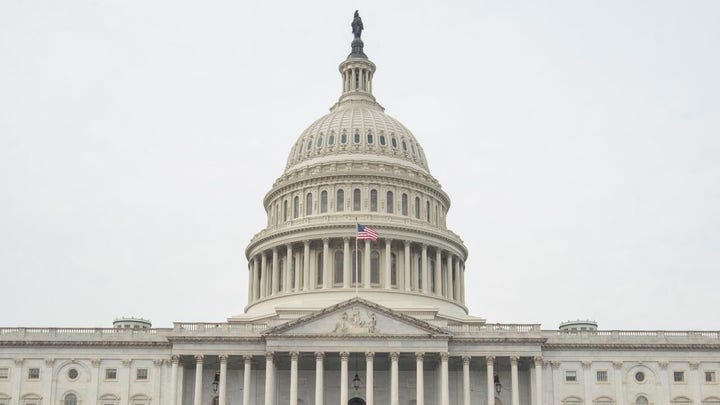 The crisis consumed Congress – mostly because people sensed that something like Thursday’s bombings was about to happen. It was a race against the clock. And lawmakers and staff cobbled together ad hoc networks to maneuver people out of Afghanistan.

Reps. Seth Moulton, D-Mass., and Peter Meijer, R-Mich., sprung into action. They flew to Afghanistan for a few hours to see the situation for themselves -- and then thumbed a ride out.

That maneuver prompted a stern rebuke from House Speaker Nancy Pelosi, D-Calif. In a letter to all lawmakers, Pelosi said traveling to Afghanistan "would unnecessarily divert needed resources from the priority mission of safely and expeditiously evacuating Americans and Afghans." She noted that extracting people at risk "requires the full forces and attention of the U.S. military and diplomatic teams on the ground."

But no one signed off on the expeditions of Moulton and Meijer.

"It’s not the time to go," said House Foreign Affairs Committee Chairman Gregory Meeks, D-N.Y. "It’s selfishness to try to get some attention for yourself and it doesn’t help the people that we want to be helping right now."

"This is deadly serious. We do not want members to go," Pelosi said.

But the phones still rang on Capitol Hill with constituents begging for help. Aides struggled to navigate bureaucracies to evacuate those in need.

It raised the question about the confidence lawmakers may have in the Biden administration in pulling this off.

Yours truly asked Pelosi if lawmakers like Moulton and Meijer may not have felt compelled to take matters into their own hands if they had more confidence in the Biden administration.

"They want to freelance on their own," Pelosi replied. "I would not make anything bigger of this."

But it wasn’t just Pelosi who tried to tamp down members from heading to Afghanistan.

"I explained to them that I don't think they should (go)," said House Minority Leader Kevin McCarthy, R-Calif. "I think it creates a greater risk. You've got enough Americans over there. They'd be held hostage. They make a point out of a member of Congress."

Fox learned that there were several other lawmakers who hoped to hitch a ride to Afghanistan when word trickled out about Moulton and Meijer. But those who were crafting itineraries ditched their plans after admonitions from congressional leaders, the Pentagon and the State Department.

Meijer took issue with those who criticized him and Moulton.

"The opprobrium from the Defense Department, from the White House, from the State Department, is frankly laughable," Meijer told Fox News’ Bret Baier. "Right now, they have done everything to obstruct the situation."

After the attack, the State Department reached out to congressional staff with an urgent message. Diplomats begged congressional staff to halt efforts to direct people to the airport in Kabul. Fox News was told that Capitol Hill staff were still sending those messages to people trying to escape Kabul on Thursday morning.

"All staff engaging in this type of uncoordinated messaging to people on the ground must cease due to the security situation," said the message from the State Department.

But many offices ignored the directive.

"We’ve come too far," one congressional aide told Fox News. "We have to do all we can do to get people out of there."

That said, the Biden administration had successfully evacuated close to 100,000 people from Afghanistan.

In the dark for hours

It was even hard to for lawmakers and staff to cull information out of Afghanistan following the attack. Information was fragmentary. Many found themselves in the dark for hours, frantically dialing up contacts overseas or phoning Foggy Bottom for nuggets.

McCarthy demanded the House return to session for briefings. Congress doesn’t need to be in session for briefings. But it was hard for anyone to get super-sensitive information since few were in Washington. Lawmakers lacked access to special rooms at the Capitol equipped to receive such critical intelligence.

But perhaps no one needed special conclaves in secure rooms of the Capitol to truly grasp what unfolded Thursday.

There was only one message worth digesting.

It stood there in plain sight. Displayed, in the most simple, yet compelling of manners.

All one needed to do was look at the American flag flying atop the Capitol on Thursday morning.

And look at it again on Thursday night.