Tucker: The unraveling of the Michael Flynn case

Michael Flynn did not commit a crime and they knew it.

If you were paying any attention to the news Thursday afternoon -- and we suspect you were -- you know there is a passionate debate underway right now among political partisans over the Justice Department's decision to drop the case against General Michael Flynn. They are screaming.

But there shouldn't be a debate because there actually isn't a debate about why the case was dropped. We already know. DOJ officials explained it in detail. Read the filings; it's worth it. They're online.

Clearly, almost nobody commenting on the case has read them, and they should. The documents are shocking, not to Republicans or Democrats, but to Americans.

We've outlined much of what we knew about the Flynn case in previous segments on "Tucker Carlson Tonight," how a corrupt FBI official called Peter Strzok decided to derail Mike Flynn, using any means necessary. At one point, Strzok considered charging Flynn under something called the Logan Act. The Logan Act is a 220-year old law that in the entire span of American history has never been used to convict a single person. In fact, no one has even been indicted under the Logan Act since before the Civil War.

And by the way, it's probably unconstitutional. You probably couldn't do it now if you want it. But Strzok didn't care. His goal was to keep the investigation going, whether he had a legal justification for doing that or not.

By January 4th of 2017, the FBI had already completed its investigation of Flynn, which was thorough. After four months of looking into Flynn, and they found "no derogatory information of any kind linking Flynn to Russia."

Now, in a fair investigation, the kind that we have a right to expect as Americans, it would have ended right there. And according to the DOJ, it should have ended right there: "The Department does not believe there was a legitimate basis to investigate and prosecute the designated National Security adviser for communicating with a foreign ambassador and seeking to mollify geopolitical tensions in advance of the inauguration of the next President."

How often does the FBI set people up? How many other lives have they destroyed without the public knowing about it? In other words, this isn't about Michael Flynn. It's about you.

And that's the essence of it right there. Michael Flynn did not commit a crime, and they knew it. How did they know? Because the FBI had already tapped Michael Flynn's phone, which itself is a shocking outrage -- completely unacceptable in a free country that, for some reason, nobody in Washington seems to notice or care about. They should.

Because the FBI already knew what Flynn had said in the call in detail, there was, the Department announced, "no justification or need to review Mr. Flynn as to his own personal recollections of what had been said."

In other words, the whole thing was a setup from the first moment. Now we know this for certain. We're not speculating because we have Peter Strzok's text messages to his creepy government lawyer girlfriend, Lisa Page.

But what if we didn't have those text messages? We almost didn't. At first, you'll recall, the FBI claimed they had been lost due to some "technical glitch." So, we almost didn't find out what really happened in this case. Michael Flynn almost went to prison.

And that gets to the nub of all of this, the most important question of all: How often does the FBI set people up? How many other lives have they destroyed without the public knowing about it? In other words, this isn't about Michael Flynn. It's about you. It's scary to think about that.

Most people in Washington seem determined not to think about it. They are intent on excusing all of this. Ilhan Omar was among the first to chime in on the news today. "White privilege at work," she tweeted.

Omar didn't explain what in the world Mike Flynn's case might have to do with his skin color, which he cannot control. But she denounced the decision is racist, anyway. Surprised? You shouldn't be surprised.

Ilhan Omar is a person who clearly married her own brother in an immigration scam, who passionately hates the country that saved her, who reduces every conceivable issue to the most vicious kind of race-baiting.

Can a single human being actually be as loathsome as Ilhan Omar? It's hard to believe. She's like a parody of repulsiveness. Sometimes, you doubt she really exists; the Republican National Committee. must have created her. We can't confirm that, of course.

We can say with confidence the RNC did not create cable news. The dummies there were almost as angry as Ilhan Omar was. Watch Jeb Bush's former flak take a break from sucking up to professional Harvey Weinstein enablers like Noah Oppenheim to lecture the rest of us about smear campaigns.

Jeremy Bash, former chief of staff for the CIA and Defense Department: Today, we've seen the political corruption of the justice system that Mike Flynn has long been calling for. The Justice Department had nothing to do with this. This was the White House, 100 percent.

Elie Honig, CNN legal analyst: The fix is in. This is an absolute injustice.

What the federal government did to Mike Flynn was demonstrably and provably unfair, and anyone who refuses to admit that in the face of overwhelming evidence should not wield power.

So, what exactly are these people saying? What argument are they really making? Mike Flynn was set up by corrupt law enforcement officials. They suggested their goal was to "get him to lie so we can prosecute him or get him fired." That's not speculation. The FBI wrote that down on paper. Flynn faced a maximum of five years in prison.

Are the people you just saw really arguing that Flynn's prosecution was legitimate? Are they arguing he should serve the time behind bars? It's enough to make you dizzy.

Keep in mind, these are supposed to be "liberals." Okay, so whatever happened to their commitment to civil rights? To fairness? In fact, there's nothing liberal about the arguments they are making. This is the most brutal kind of power politics disguised with lies.

"This moment represents the full collapse of an apolitical Justice Department," wrote CNN's legal analyst Susan Hennessey. MSNBC's justice analyst, Matthew Miller, agreed with that: "Barr is giving Flynn treatment that would not be available to any other American."

And just in case you wondered if all these responses were coordinated -- because of course, they were -- the world's angriest former labor secretary, Robert Reich, wrote this: "Under William Barr's stewardship, the Justice Department has become nothing more than a political tool for Trump to wield against his enemies and withdraw against his friends. This is how dictatorships are built."

Pause and consider this. Once again, it is head-spinning in its falseness. It's the opposite of what's true. Dropping the case against Michael Flynn means the Justice Department is now a political tool? No. Flip it around 180 degrees.

The attorney general dropped the case because the Justice Department was already being used as a political tool to remove the national security adviser to the United States. That's the whole point. It's not a debate. No honest person could reach any other conclusions. Read the documents yourself.

But these are not honest people. These are people who applauded when Adam Schiff of California baselessly denounced his political opponents as Russian agents, including this show.

Naturally, Schiff himself weighed in, too. He couldn't help himself: "Flynn pled guilty to lying to the FBI. about his illicit Russian contacts. His lies do not now become truths. This dismissal does not exonerate him."

Wait, what? Is Adam Schiff, the chairman of the House Intelligence Committee, now claiming that a call between the incoming national security adviser and the Russian ambassador to the United States is "an illicit Russian contact?" He is claiming that.

This is insanity, and it is calculated insanity. And in the end, I hate to tell you, it may work. It is entirely possible your grandchildren will be reading Adam Schiff's version of history 20 years from now. That's why they're saying it. That's the goal.

In the meantime, you should consider what it would mean if unscrupulous liars like these were ever to take full control of this country. They know Michael Flynn is not a dangerous criminal. If he was a dangerous criminal, they would be working to free him from jail. 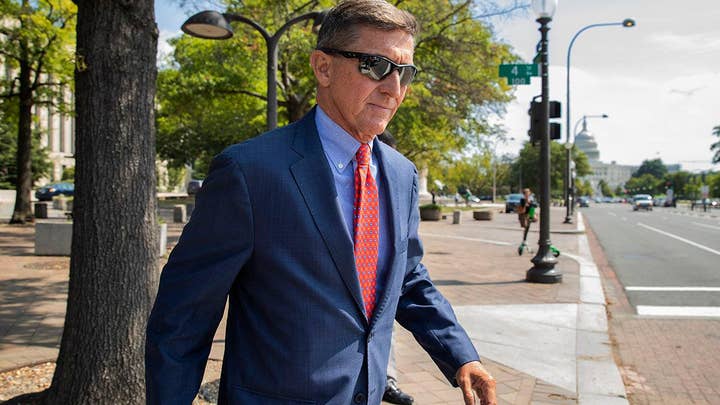 No, they wanted Flynn crushed purely because he happened to be in the way of the power they seek. And that's why they're still trying to put Roger Stone behind bars because he mocked them to their faces and that diminished their authority. Roger Stone may still go to prison, by the way -- we'll keep you posted.

But the question is how many other inconvenient Americans would they bankrupt and imprison if they could? Let's hope we never find out. In the meantime, you should ignore their yelping. Turn it off. This is an offense against equal justice, they scream into the camera. Right.

The very same people who demand day after day that we hold American citizens to completely different standards based on how they look. Now, they're telling you justice must be blind. It's absurd. It's insulting.

The essence of fairness in every country at every time is fairness. Fairness. What the federal government did to Mike Flynn was demonstrably and provably unfair, and anyone who refuses to admit that in the face of overwhelming evidence should not wield power.