The defining characteristic of the American ruling class is narcissism. The people in charge talk almost exclusively about themselves, about their limitless neuroses, their so-called privilege, their guilt about that privilege, their "identity." No matter what they're saying, it's always all about them.

America's frame of reference has shrunk to the point where we can only see ourselves, and the rest of the world knows that -- especially China. China's leaders aren't frivolous and stupid like our leaders are. They don't care what pronouns you use. They don't hire people because of the way they look. They have a very specific goal: To knock the U.S. from our perch.

To accelerate this, the Chinese Communist Party has engaged in a ceaseless effort to subvert our leadership class, and that has worked more effectively than anyone imagined.

On Tuesday, a story broke in Axios, no one's idea of a right-wing news outlet. But to their great credit, a pair of Axios reporters doggedly spent the last year investigating what turned out to be an amazing story.

FBI STEPPED IN AFTER SUSPETED CHINESE SPY GOT CLOSE TO SWALWELL, OTHER POLITICIANS, REPORT FINDS

A Chinese intelligence agent called Fang Fang -- or, as she renamed herself when she came to this country, Christine Fang -- became a force within the California Democratic Party. Along the way, she began a relationship with Eric Swalwell, now  a member of the House Intelligence Committee and privy to this country's most closely held secrets.

Fang's relationship with Swalwell begin in 2012. Like so many Chinese spies, she used college as her cover. She enrolled as a student at a university in the Bay Area and joined a number of left-wing identity politics organizations on campus. From there, she began raising money for Democratic candidates.

U.S. intelligence officials believe that Fang had a sexual relationship with Eric Swalwell. When "Tucker Carlson Tonight" asked Swalwell's office about that Tuesday, his staff replied by saying they couldn't comment because such information might be "classified." They did not elaborate or explain what they meant by that.

When Fang met Swalwell, he was a little-known city councilman in Dublin, Calif., but he had grand political aspirations. Fang became his regular companion. She was photographed with Swalwell at political events several times and became a financial bundler for his campaigns.

TUCKER: OUR ELITES' COLLUSION WITH CHINA IS REAL AND WIDESPREAD

Fang apparently pulled in large amounts of money from a variety of sources to help Swalwell get elected to Congress. It's not entirely clear from where all of that money came. We do know that Fang helped Swalwell secure the support of his district's Asian-American community, which political analysts have cited as a critical factor in his win in 2012.

This is not a new trick for Chinese intelligence. Sen. Dianne Feinstein, D-Calif., the state's senior Democrat, employed a Chinese spy in her office for nearly 20 years. That spy drove Feinstein around and directly assisted her in outreach to Asian-American voters. Like the spy that Feinstein hired, Fang gained access to Swalwell's office in Washington. U.S. officials say Fang even managed to install an intern, almost certainly as a spy for the Chinese government.

We don't know the full extent of Fang's intelligence activities in this country. She eventually fled to China while under FBI investigation. Swalwell claims he hasn't talked to her in years. We do know that in Eric Swalwell, the Chinese government picked a promising vehicle. He is one of the most high-profile members of Congress and ran for president last year.

At every turn, Swalwell has remained a reliable source of Chinese government propaganda. As a member of the House Intelligence Committee, he's styled himself as an expert at spotting foreign interference in our government. You may remember he spent years accusing President Trump of working for a hostile power. The irony is overwhelming.

It's always those who have the most to hide who attack other people for the very things they've done. Two years ago, we asked Swalwell to come on this show and reveal the evidence he claimed to have collected on Russian collusion. Swalwell came, because he couldn't turn down a TV opportunity. He made loud noises and he left. He had no evidence, but he didn't stop making allegations. 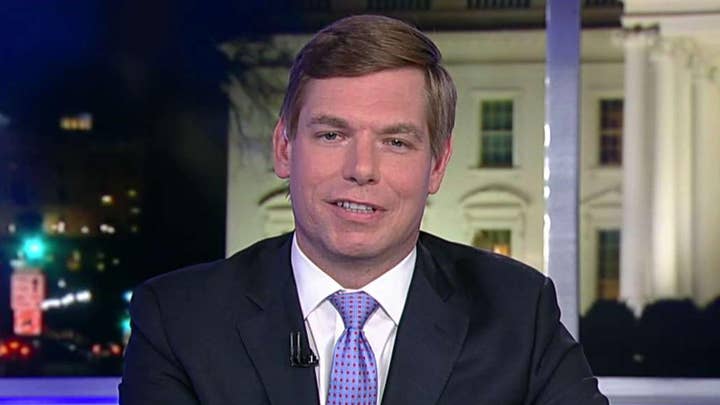 When the Russia hoax subsided, as it inevitably did because it was a lie, Swalwell turned his energies to his first love, defending the government of China from all criticism

In March, Swalwell told the rest of us that we are racist if we describe where the coronavirus came from originally.

If you're bored, take those words and type them into Google and you will find analogues, almost precisely to the word, in Chinese state media. That's what he was repeating. If you ask Eric Swalwell, blaming the Chinese government for the coronavirus was a mistake. The right approach is to defer to the Chinese government as much as you possibly can.

In 2017, Swalwell expressed outrage that the Trump administration was taking too tough a position with China's ally, North Korea.  Instead, Swalwell demanded, Trump must "[t]alk to experts, allies & China."

Do you notice a pattern here? Of course you do, and here's the amazing thing: At this very moment, Eric Swalwell -- who has used his office to promote Beijing's talking points almost word-for-word; a man who admits to a close personal relationship with an actual Chinese spy who helped him get elected to Congress, raised money for him and put an intern (probably another spy) in his office -- continues to serve on the House Intelligence Committee, where he has unrestricted access to classified information.

How is this happening?

This article is adapted from Tucker Carlson's opening monologue on the Dec. 8, 2020 edition of "Tucker Carlson Tonight."