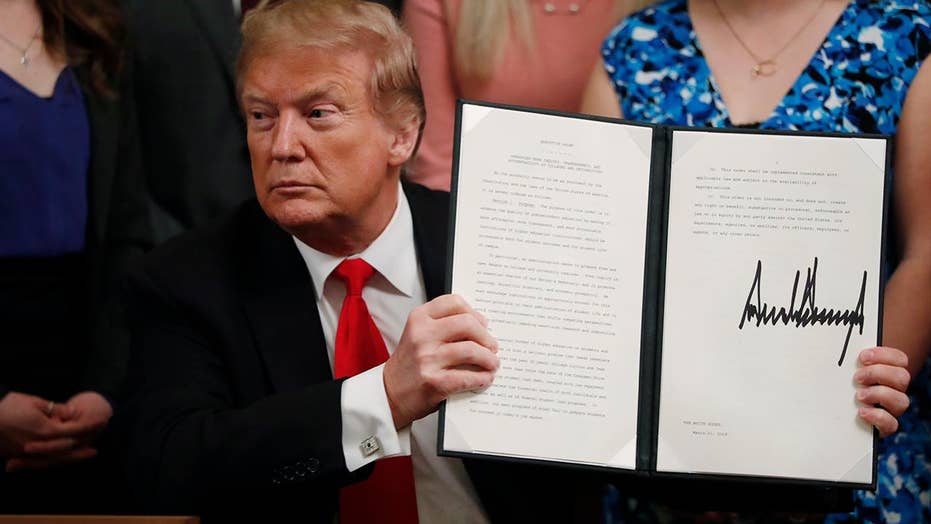 President Trump’s signing of an executive order Thursday that requires colleges and universities to support free speech or face the loss of federal funding calls needed attention to the serious problem of campus censorship.

The president invited more than 100 conservative students to the signing ceremony. On many campuses, conservative speech has faced unjustified and improper restrictions.

“Under the guise of speech codes, safe spaces and trigger warnings, these universities have tried to restrict free thought, impose total conformity and shut down the voices of great young Americans like those here today,” President Trump said

“These ideas are dangerous,” the president said. “Instead, we believe in free speech, including online and including on campus.”

Students at the signing ceremony have personal stories of being targeted or censored for their conservative beliefs on campus. I know their stories well.

I have spent the past five years traveling to college campuses across the country to organize, recruit, and train conservative students. I have been spat on, shoved and threatened with violence. I was once even licked by a man claiming to have Ebola after leaving Oakland State University’s free speech zone during a Hillary Clinton speaking engagement. Seriously.

But my experience pales in comparison to what conservative students face on a daily basis. Free speech zones, speech codes, safe spaces, repressive speech fees, aggressive administrations and outright violence have become the norm for them.

If we let the minds of an entire generation atrophy to mush in an environment with little or no competition of ideas, then we will have failed as a society.

There are, in fact, hundreds of examples of leftist repression of conservatives throughout the years. But the recent assault of Hayden Williams at the University of California, Berkeley has raised the alarm about suppression of free speech on campuses to a whole new level.

While conservatives like Williams have been in the spotlight, the real beneficiaries of President Trump’s executive order are all of the students who may not even know their free speech rights are being suppressed on their campus. 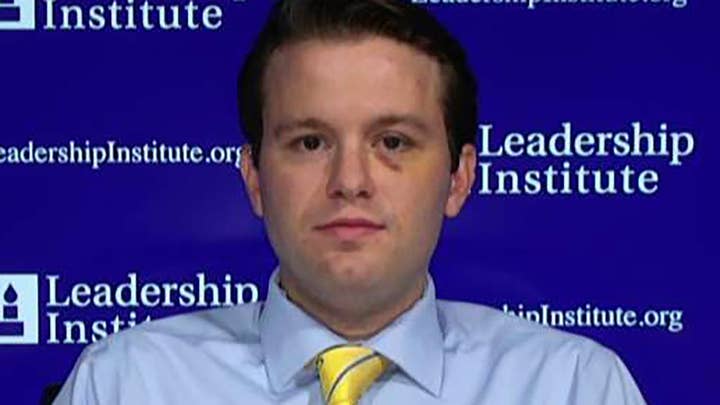 That means everyone else on college campuses – the wide-eyed students eager to change the world, the apathetic students who don’t yet have a political ideology, and the left-leaning ones who already do. They are the ones who have not been taught to use their words effectively when confronted with alternative ideas, which is why we see many of them resort to using their fists instead.

The irony of the Berkeley incident is that the man who threw the punch at Williams may land in jail, while Williams has been praised by the president of the United States and will surely have a host of career opportunities thrust in his face.

So who is the true victim of the free speech problem that has consumed college campuses? Who came through that atmosphere of hostility equipped with tolerance and the ability to handle alternative ideas? Hayden Williams did.

By turning higher education into a carefully curated and comfortable echo chamber for some students, all students are being robbed of fundamental life skills. Peaceful disagreement, conflict resolution, and critical thought have been discarded, only to be replaced by trigger warnings and “hate speech designations.”

College used to be a place where students could expect to be taught to flex their mental muscles. It was reasonable to assume they would have their most closely held beliefs challenged daily, and might even change their minds from time to time.

There were no “safe spaces” for them to hide from words or ideas with which they disagreed – and they were better for it. College was hard, it was scary, and it made people mentally stronger.

With overzealous administrators desperate to compete for more students by making campus the equivalent of a pillow factory, we have lost the intellectual rigor needed to forge critical thinkers out of impressionable young people.

By turning higher education into a carefully curated and comfortable echo chamber for some students, all students are being robbed of fundamental life skills. Peaceful disagreement, conflict resolution, and critical thought have been discarded, only to be replaced by trigger warnings and “hate speech designations.”

With their consistent repression of dissenting speech from conservative students, college administrators are all but guaranteeing that their students will never have to do the intellectual grunt work necessary to build the skills needed to deal with the inevitable disagreements they will experience in the real world.

All students, regardless of their political affiliations, are being scammed by institutions of higher learning when they are coddled into inadequacy by all-too-eager-to-please liberal administrators.

Every college and university has an obligation to provide students with an education – not an indoctrination.

It is unfortunate that an executive order from the president is even needed to force administrators to adhere to the First Amendment of the Constitution – but it is an absolute necessity, given the alternative.

A recent study by the Brookings Institution shows that student opinion on the application of the First Amendment is at an all-time low. According to the poll, 51 percent of students agreed that it is acceptable to shout down a speaker on campus, and 19 percent of students consider violence an acceptable means of silencing an opposing view.

According to the Foundation for Individual Rights in Education, 129 schools in the U.S. currently have “at least one policy that both clearly and substantially restricts freedom of speech” and 282 schools have policies that “restrict a more limited amount of protected expression or, by virtue of their vague wording, could too easily be used to restrict protected expression.”

College administrators are supposed to know better. They are supposed to be the ones writing the policies that promote the free expression of ideas – not limit it. The fact they have demonstrated time and again that they won’t rise to their responsibility as educators left President Trump with little choice but to compel them to do so.

In the face of changing technology – which is providing Americans with the unprecedented ability to almost entirely insulate themselves from information  they don’t like – higher education has more of a responsibility than ever to serve as a free marketplace of ideas.

Members of Generation Z have the potential to follow their millennial counterparts into the comfortable numbness of carefully curated online echo chambers and intellectual stagnation. They will not be presented with an opposing idea unless they actively search for it (something that is becoming increasingly difficult in the face of Big Tech censorship).

As a result, many young people will never develop the ability to effectively deal with an idea they don’t like.

In all too many cases, exposure to opposing views results in a desperate, violent and senseless meltdown more suited to barbaric children than civilized adults. It is time that the real adults in the room did something to level the playing field again so that good old-fashioned disagreements can happen without fear of violence and intimidation.

If we let the minds of an entire generation atrophy to mush in an environment with little or no competition of ideas, then we will have failed as a society.

President Trump is right. Schools that promote and enforce policies that directly contradict this country’s highest and most cherished laws don’t deserve taxpayer funding. In fact, it is the responsibility of the executive branch to make sure the Constitution and our laws are enforced.

This isn’t about conservative versus liberal, Democrat versus Republican, or left versus right. It’s about intellectual freedom versus social tyranny. When those who wish to see colleges and universities function as the intellectual equivalent of totalitarian police states are finally defeated, we will all have gained a major victory for freedom and individual liberty.

Our free speech rights must be protected, so that all views have space in our society where they can be expressed.