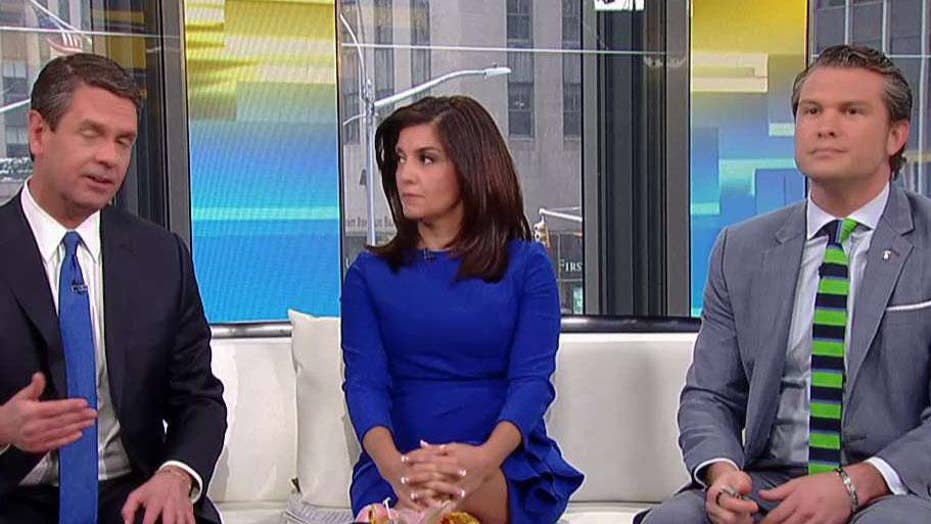 Police have made an arrest after a conservative student was attacked at the University of California, Berkeley.

President Trump acted boldly in defense of our First Amendment rights when he announced Saturday that he will sign an executive order requiring colleges and universities to protect free speech on their campuses in order to qualify for federal research dollars.

The president is right to stop our government from handing out taxpayer dollars to subsidize institutions that practice censorship – regardless of whether that censorship is used against those on the left or the right.

According to the National Science Foundation, the federal government gives colleges and universities over $26 billion annually to conduct research, the Washington Post reported.

The Constitution’s First Amendment protects all Americans against government efforts to restrict free speech, freedom of the press, freedom of religion, the right to peaceably assembly and the right to petition the government for the redress of grievances. It’s been part of the Constitution since 1791 and is fundamental to guaranteeing our liberty.

The president made his announcement at the Conservative Political Action Conference alongside Hayden Williams, a field representative for the Leadership Institute who was assaulted last month at the University of California-Berkeley while he was recruiting students to join the conservative group Turning Point USA.

Williams was repeatedly punched in the face in the unprovoked attack, leaving him with multiple bruises and a black eye. A video of the brutal assault went viral, receiving attention by Fox News and other conservative media organizations but little attention in the left-wing anti-Trump media.

A suspect in the attack was arrested Friday. Authorities said Zachary Greenberg, 28, was charged with assault with a deadly weapon and attempting to cause great bodily injury.

“College campuses have become increasingly unsafe for conservatives,” Charlie Kirk, the founder and executive director of Turning Point USA, told Fox News earlier. “Our amazing Turning Point USA team was talking and then confronted by the hateful left, which resulted in the assault and punching in the face just because of a difference of opinion. If the attacker was wearing a MAGA hat, this would be classified as a hate crime and all over every news channel.”

The silencing of conservatives on college campuses is serious problem that has spread across our nation. Even when administrators don’t actively prevent conservatives from speaking on campus, individual extremists sometimes take matters into their own hands by physically assaulting the speakers.

Regrettably, Kirk is right – far too many academic institutions treat the concept of free speech with open hostility, arguing that it’s merely a tool of “white oppression” and “privilege.” And while the media jump to attention when liberals are attacked for their speech, attacks on conservatives get far less attention.

The silencing of conservatives on college campuses is serious problem that has spread across our nation. Even when administrators don’t actively prevent conservatives from speaking on campus, individual extremists sometimes take matters into their own hands by physically assaulting the speakers.

Ironically, some of the most intolerant people in our society are the very ones who preach “tolerance” in order to advance a radical “social justice” agenda that demands ideological conformity and scorns independent thinking.

That’s not the way we do things here at Liberty University in Lynchburg, Virginia, where I serve as president.

Even though Liberty University is a private institution that cherishes its Christian values, we also take pride in hosting high-profile speakers with different points of view. And we’re proud to report that our students don’t resort to violence when they encounter activists with whom they disagree.

We’re not afraid to expose our students to the views of those on the left – even the far left. We don’t think our students are delicate snowflakes who must be sheltered from free speech and the open exchange of competing ideas.

In 2015, for instance, we hosted democratic socialist Sen. Bernie Sanders, I-Vt., who spoke about a vast array of political and economic topics at our twice-weekly convocation with all main campus students in attendance. Last year, former President Jimmy Carter delivered the keynote speech for our 45th Commencement.

Having a former Democratic president and a socialist who wanted (and now wants again) to become the Democratic Party’s presidential nominee did not frighten us. We invited them because we want our students to hear a diversity of viewpoints. This, after all, is why our founders created the First Amendment.

No Liberty University student threw a punch at either President Carter or Sen. Sanders or tried to shout them down, even though it’s a safe bet that most of our students disagree with most of the left-wing political positions that the two embrace.

Liberty University is no ordinary college campus and we are pleased to report that our students are able to handle open political discourse and free speech without resorting to violence.

This week, for instance, we hosted an event featuring some of America’s leading activists, war heroes and public officials. They spoke about defending free speech, conservative activism, honoring our veterans and much more.

During the event, we were also thrilled to reveal that Vice President Mike Pence will serve as our commencement speaker on Saturday, May 11 — news that was cheered by some 10,000 Liberty University students when Pence announced it during his speech at the Conservative Political Action Conference, which was live-streamed directly to campus.

Sadly, hosting a similar event at the University of California-Berkeley or any other liberal college would be practically impossible, since most institutions of higher education in America are actively silencing conservative voices while giving violent radicals a “safe space” on campus.

Free speech and intellectual diversity are two of the most important pillars of a college education. That’s why I urge every college and university in the country to go further than just complying with President Trump’s upcoming executive order. I urge them to actively encourage open political discourse on their own campuses – just as we do at Liberty University.