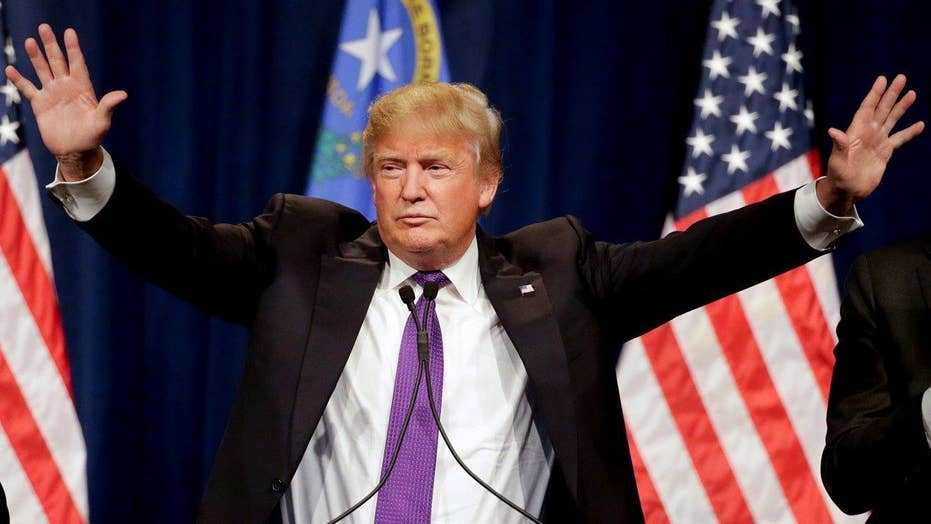 Will Trump's third win in a row narrow the GOP race further?

Donald Trump has now won in New Hampshire, South Carolina and Nevada. States in all parts of the country with an eclectic mix of voters.  The thread between those wins is voter anger.  Nearly 6 in 10 of those who showed up to vote in Nevada were angry at the federal government. Another third were dissatisfied, for a total of 89 percent.

When you think the national house is falling apart you aren’t in the mood to hire the contractors who worked in it previously. Six in 10 of Nevada voters want the next president to be someone from "outside politics." And 70 percent of them voted for Donald Trump.

I watched the 1976 movie “Network” this week. In it the late Peter Finch plays Howard Beale, an old news anchor who gives a wild, fire-and-brimstone call for his viewers to open their windows and scream, “I’m mad as hell, and I’m not gonna take it anymore.”

Donald Trump is in part Howard Beale, and a big chunk of Americans are opening their windows.

I was reminded of that when friends in Nevada told me they didn’t even consider voting for Marco Rubio or Ted Cruz, even though the longest either of them has been in Washington is just over five years. Jon Ralston, the dean of Nevada’s political journalists said that aides to Trump’s competitors “are very frustrated by what everyone's frustrated by: you can't talk any sense into the Trump voters; they can't turn them.”

Americans have lost so much faith in our elected leaders, our institutions and the media that a big chunk of them aren’t interested in listening to them anymore. Donald Trump has successfully morphed himself from a political insider who was cozy with the establishment into a tribune -- an unofficial defender of the rights of the individual -- reflecting the grievances of ordinary voters  from wage stagnation to immigration paralysis to phony politicians.

Even given that anger, it’s still surprising that Trump is able to glide over so many of his outrageous statements and omissions in his arguments.  His failure to release his promised tax returns? Hasn’t he released a summary of his financials? That should be enough is the response.  His four corporate bankruptcies? But he bounced back from them. The fact he was a Democrat as recently as 2009?  But wasn’t Ronald Reagan one once is the answer.  Doesn’t he constantly change his positions on issues?  But don’t all politicians, I am told.  And no matter. Trump supporters are convinced that on his core issues -- building a wall at the Mexican border, stopping bad trade deals and showing strength overseas -- he will deliver.

Trump’s record of being over-the-top in his decade-long stint on reality TV is serving him well. No matter what he says, it’s viewed as entertainment and not quite to be taken seriously -- just like reality TV.

When TV commentator Glenn Beck appeared on behalf of Ted Cruz in Elko, Nevada on Monday, he called Trump a bully. He cited a Trump tweet in which the businessman threatened the wealthy Ricketts family for giving money to a SuperPAC that ran ads attacking Trump’s stands on issues.

"Today Donald Trump tweeted a threat to the owner of the Chicago Cubs. "When we have a candidate that threatens people… This is not American. This is not equal justice. This is not who were are. If we give in to our anger; if we start to go down that path and we start to listen to the bullies, we lose what made us great," Beck said.

Cruz wound up carrying the county that includes Elko, but not much else. Only four out of 10 Republicans in a new Associated Press poll have a favorable opinion of Donald Trump. But of those who do, Nevada is the latest demonstration that they believe he is the man to turn over the rotten apple cart of Washington.

Is Donald Trump likely to be the nominee of the Republican Party? He is clearly the frontrunner, and the bandwagon effect of his wins is building his support. But the math says that if he doesn’t take the winner-take-all states of Florida and Ohio he will arrive at the GOP convention short of the delegates needed for a first ballot victory. After that, anything could happen as delegates are released from their obligations to candidates.

The only major obstacle standing in the way of Trump is the perception of his electability. Marco Rubio and Ted Cruz beat the ethically-challenged Hillary Clinton in the Real Clear Politics average of all polls. Donald Trump does not. Only a quarter of Nevada Republicans said electability was their major concern, and Trump was crushed among those voters.  If the delegates get a second ballot at the GOP convention, they are likely to be far more focused on electability than voters have been to date.

After all, since the death of Justice Antonin Scalia this month, the election in November is likely to be not just about the presidency, but also about the future of the Supreme Court itself.