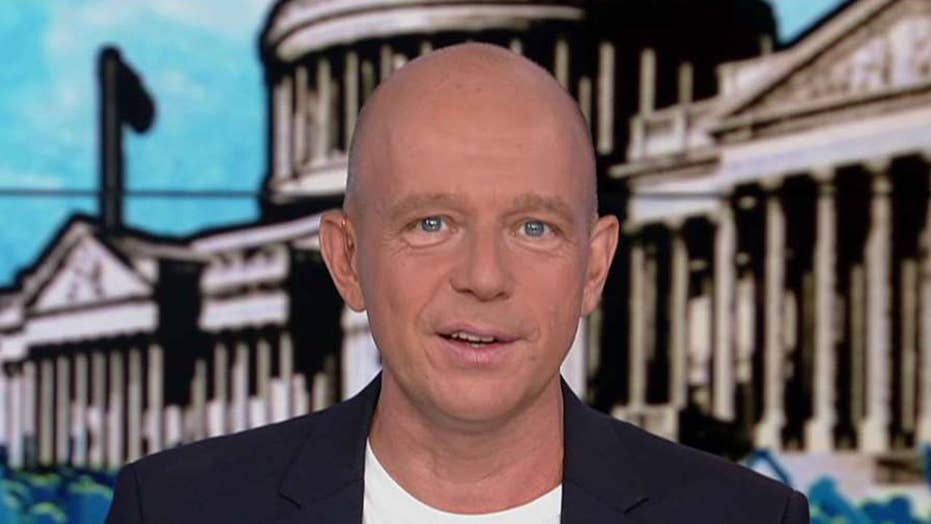 Steve Hilton: The Truth about Impeachment

Steve discusses the latest in the impeachment debacle following a week full of shenanigans.

Last week it was all laid bare. Public hearings, partisan posturing ... nothing new.  What a farce!

Let’s start, shall we, by enjoying for a moment the laughable hypocrisy of the Democrats’ latest desperate impeachment gambit. Apparently, it’s about bribery, now. Nancy Pelosi said so, and they all fell in line like sheep, replacing "quid pro quo" as the leading impeachment talking point against President Trump.

"The bribe is to grant or withhold military assistance in return for a public statement of a fake investigation into the elections," Pelosi said. "That’s bribery."

Bribery? Are they kidding? In the swamp, bribery is their business model. What do you think a political donation from a business or a lobbyist or a corporate PAC is? It’s money in exchange for a political favor. It’s a bribe.

Oh, look, Adam Schiff. He took over $350,000 in bribes from the defense sector and -- surprise, surprise -- pushed for military action overseas. Schiff took over $100,000 from AT&T. When it was reported that President Trump wanted to block the AT&T-Time Warner merger, guess who piped up on AT&T’s behalf?  "Shifty Schiff," of course.

How about Jerry Nadler? He was bribed by lobbyists for Somalia and a motley assortment of other foreign governments. He took over $80,000 from teachers’ unions and, in exchange, voted against charter schools and a voucher program.

And then, the queen of bribery, Nancy Pelosi. She boasts about her fundraising prowess. Raising money is the way she clings to power. Her office proudly told The New York Times earlier this year that she’s raised over $700 million since 2002. Does anyone think that money is anything other than bribes?

It worked for Visa. In the 2008 cycle, they gave over $100,000 to Democrats. On top of the fact that Nancy herself snagged some preferential stock in the company, those bribes helped persuade Pelosi, as Speaker of the House, to kill off legislation that would have cut Visa’s revenues.

And then there’s the foreign bribes, including, unbelievably, the fact that Pelosi has taken money from lobbyists representing shady companies in Ukraine.

My God, bribery, thy name is Nancy!

So, what did the Democrats achieve last week with their impeachment rebranding and public parade of disgruntled bureaucrats? It wasn’t damaging to President Trump, as they’d planned. It actually hurt the ruling class and the establishment, who have declared war on President Trump, because it exposed, for all to see, their snooty arrogance and contempt for democracy.

This was Bill Taylor, the current Ukraine ambassador:

William Taylor: I am not here to take one side or the other.

That is highly revealing and completely false. Of course, they take one side. They take the establishment side, the bureaucracy side, the ruling class side.

This is not about Republican versus Democrat; this is insiders versus the outsider. That’s why they’re so obsessed with whether things are “irregular.”

"Highly irregular" -- that’s bureaucrat-speak for “deplorable.” That’s what this is all about. It’s the system striking back.

However bad some people think Trump may be, his enemies are worse.

Trump wants a State Department that stands up for America in the world. The system wants to keep it standing up for the world in America. Trump thinks promises made before an election should be implemented after an election. They want to ignore those promises as if the election never happened.

Trump wanted to govern; they chose to obstruct. Trump wants reelection; they won’t take the risk. But does the Trump-hating ruling class even understand how much long-term damage it’s doing to America’s fabric with its reckless, demented drive to remove Donald Trump by non-democratic means because they’re worried he’ll win an actual election?

They’ve made sure future presidents can’t have confidential conversations with foreign leaders. They've distracted and divided the country, and they’ve guaranteed that the next Democratic president will also be impeached.

I hear people all the time saying, “How can you support Trump? Look at his behavior; look at his tweets.” I say, “Look at his results.”

Working Americans finally getting a pay raise after decades of income stagnation, engineered by the same establishment geniuses blocking Trump’s every move.

America’s No. 1 enemy, China, finally confronted after decades of sucking up by the same establishment geniuses now plotting to kick Trump out.

And then look at Trump’s enemies. However bad some people think Trump may be, his enemies are worse. They are completely insufferable, pompous, sanctimonious, self-righteous. They’re decadent, doing just fine in their coastal enclaves, so screw everyone else.

They’re superficial, always putting style over substance. And they are oblivious to the damage they themselves did to this country with their elitist policy agenda and the damage they’re doing now with their divisive impeachment agenda.

The Democrats talk about justice. I'll tell you what justice looks like: These crazed, partisan Democrats sent to the political wilderness, their candidates defeated at every level -- the White House, Congress, state and local government -- until they return, finally, to their senses.

Adapted from Steve Hilton's monologue from "The Next Revolution" on Nov. 17, 2019.