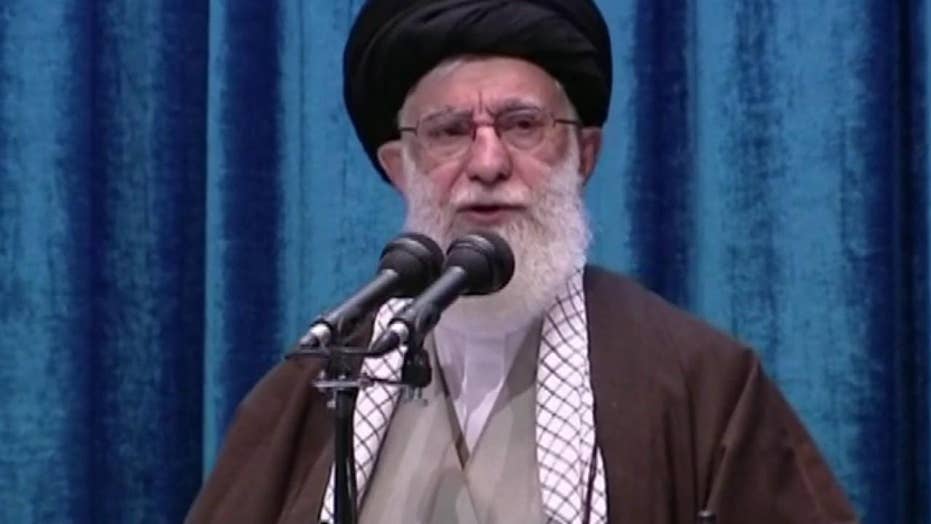 Ayatollah Ali Khamenei conducted prayers in Tehran and used the platform to praise the country's retaliatory strike against the U.S. over the killing of one of its top generals; Fox News national security analyst Dr. Walid Phares reacts.

We watched carefully as rioters stormed our new U.S. embassy in Iraq earlier this month. The scene brought back vivid memories of the day, just over 40 years ago, when the walls were breached at the Embassy in Tehran, Iran and our nightmare began.

We watched the landing of the Marines sent by President Trump. We knew instantly, no American would suffer our fate.

For 444 days, we were tormented and tortured by some of the same people that are now leaders of the Iranian government.  Never knowing if this was the day you would die.

From time to time we were taken out blind-folded to the execution site, guns were drawn and readied and the order to fire was shouted.  We will never forget the sound of multiple firing pins striking empty chambers. Realizing in that split second, you would live another day.

The suffering was not just ours. Each of us had parents, some had a spouse, some also had children who waited by the television for us to be paraded out of our jail cells in propaganda exercises.

They watched hoping for a glimpse of a loved one to at least know we were still alive. Our families suffered watching those images, we cannot even begin to understand what they went through.

Forty years ago, was very different than today.

When we returned home the politicians of the day made great promises.  We would be cared for and Iran would pay.  Soon we discovered a brutal insult at the end of our torment, President Carter had signed away our right to sue Iran.  President Carter left us with no ability to seek justice for our suffering.

In 2015, the Congress awarded us each $10,000 for each day of torment to be paid out of fines the United States collected from those who dealt illegally from Iran. Those payments dribble in. Even worse the billions of dollars of Iranian deposits held by our own government were given back to Iran by President Obama.

We may never get what was promised us, but watching a president stand up to the Iranian government was a great comfort. Watching those Marines and soldiers secure the embassy in Baghdad, knowing that there would be no more hostages taken that day filled our hearts with pride.

For 40 years our government has failed to understand that the only thing that can stop a radical regime is strength.

But today, we stand tall to thank President Trump for his actions and his strength. Today, there are no new American hostages.  Today, there is a very new understanding in Iran that this president isn’t like the others.

Kevin Hermening is an active community volunteer, small business owner, and Marine veteran. He was the youngest of the Americans held hostage for 444 days at the US Embassy in Iran from 1979 to 1981 and served a total of 13 years in the United States Marine Corps.

David M. Roeder is a decorated retired Air Force colonel and is one of the 52 Americans held hostage in Tehran for 444 days from 1979 to 1981. He graduated from DePauw University in 1961 and enlisted in the Air Force that year before later serving in Vietnam. On Oct. 27, 1979, he reported for duty as the assistant Air Force attaché to the Islamic Republic of Iran. Just eight days later, he became one of the hostages

Michael H. Howland is a retired senior CIA officer and businessman. Mike started his 40-year public service career in the military and is a decorated veteran of Vietnam. He followed his public service career by founding and managing a national security-focused business that created over 3,000 new jobs. Mike retired in 2018. Mike is presently writing a book drawn from a secret journal he kept while being held hostage in Iran from 1979-1981. Mike holds a master's degree from Georgetown University in International Law & Politics, and he resides in Middleburg, Va.

Rodney “Rocky” Sickmann graduated from Washington High School in 1976 and immediately entered the U.S. Marine Corps. In 1979, just 28 days into his tour of duty at American Embassy in Tehran, Iran, Sickmann became a player in one of the most terrifying events in U.S. history. On November 4, 1979, after months of turmoil marked by the return of the exiled Ayatollah Ruhollah Khomeini, the American Embassy in Tehran was overrun by militants and its employees taken captive. Sergeant Rocky Sickmann, then just 22, was one of 65 Americans taken hostage. Sickmann remained a hostage for 444 days before being released on Jan. 20, 1981 following 14 months of diplomacy by President Jimmy Carter. Three months later, Sickmann was Honorably Discharged after six years in the U.S. Marine Corps and received several accolades during his service including the Prisoner of War Medal, The Defense Meritorious Service Medal, Award of Valor, and Good Conduct Medal.