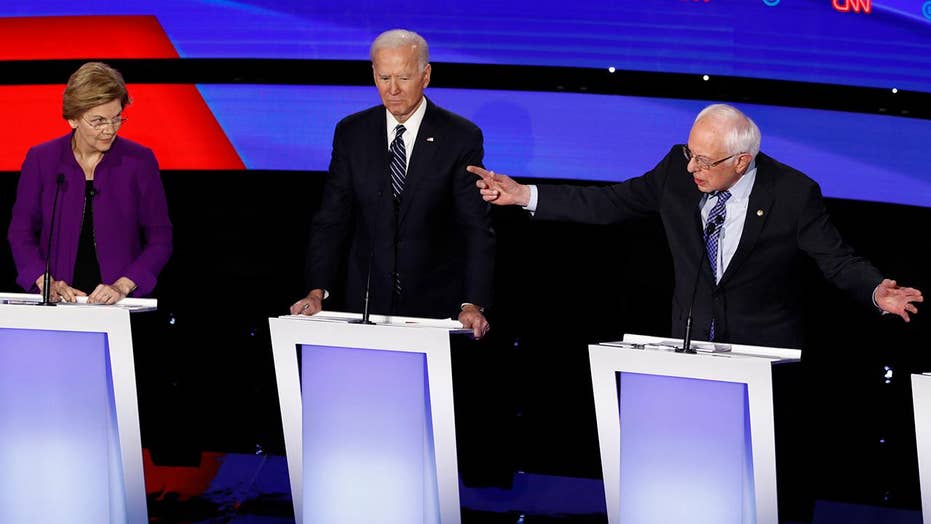 At a time when Democratic presidential candidates ought to be focused on attacking President Trump as he heads toward a Senate impeachment trial – not long after he nearly plunged our country into a war with Iran – too much attention is being focused on a silly dispute between Sens. Elizabeth Warren and Bernie Sanders.

Did Sanders, I-Vt., tell Warren, D-Mass., in 2018 that he believes a woman couldn’t be elected president this year? She says he did. He says he didn’t.

And how does this argument help anyone but Trump, who loves to see Democrats attacking each other instead of him and the harmful policies he supports?

Does anyone seriously think that with all the problems America faces today – and with a reckless, unqualified and dangerous president in the Oval Office – that the Warren-Sanders dispute will determine who wins the most votes in the upcoming Democratic caucuses and primaries? Or that the dispute tells us which Democrat would make a better president?

Warren and Sanders were enjoying a relative lovefest – handholding, hugging and practically singing “Kumbaya” until this week. The two both seek to be the most progressive Democratic candidate nominated to challenge Trump, but their rivalry seemed remarkably free of personal attacks. Both said repeatedly that they were friends

And then – just before Tuesday’s final debate before the Feb. 3 Iowa caucuses – someone mysteriously leaked supposed details of the 2018 private conversation between Sanders and Warren about whether a woman could be elected president.

What a remarkable coincidence! The leak took place at the worst possible time for Sanders, and the best possible time for Warren. Hmm … which one of these senators could possibly be behind the leak regarding a conversation between them when no other person was present?

You don’t need to be Sherlock Holmes to figure this one out. Inspector Clouseau could do it.

Clearly, Warren – or someone who supports or works for her – leaked the story, and the only way anyone could have found out about Sanders’ alleged remarks was from Warren. Unless Sanders was out of his mind, he would not leak a story that he says is false and that would hurt him.

Yet Warren sought to portray herself as the victim. Declining to attack Sanders during the debate on CNN, she angrily refused to shake his hand afterward and accused him of calling her a liar on national television.

We’ll never know what Sanders said or didn’t say about a possible female president – there were no witnesses to the Sanders-Warren conversation.

Many were perplexed that CNN would run the he-said-she-said story when there is no proof of who said what. And many were also upset with the way CNN’s Abby Phillip raised the issue during the debate. Here’s how it went down:

Phillip: Senator Sanders, I do want to be clear here. You're saying that you never told Senator Warren that a woman could not win the election.

Sanders: That is correct.

As Fox News’ Tucker Carlson said, “the message was unmistakable and crystal clear: He [Sanders] is a sexist, don’t vote for him.”

So who do the voters believe? That depends on who you ask and which camp someone is in.

Sanders and Warren voters are very similar. Sanders lost some of his ‘Bernie or bust” crowd to Warren when she first announced her candidacy. Some Warren supporters want to see America get its first woman president, and some want a new candidate or like the plans Warren proposes to adopt if she gets to the White House.

Many Sanders supporters are quite angry with Warren for raising the issue about Sanders’ alleged sexist remarks. Yet many Warren supporters believe her and believe that Sanders would be capable of making the comment denigrating women.

Sanders knows all too well what division in the Democratic Party can do. Just look at 2016, when he ran against Hillary Clinton for the Democratic presidential nomination.

Sanders’ anger at not getting the nomination was quite obvious – and 12 percent of his primary supporters voted for Trump in the general election rather than Clinton. Another large chunk of Sanders supporters stayed home and didn’t vote, while some voted for minor party candidates.

The result of this Democratic disunity was Trump’s election. If my fellow Democrats fail to get behind whoever the Democrats nominate for president this year, they will ensure Trump’s reelection.

It’s tempting and understandable for the Democratic presidential candidates to attack each other until one comes out on top. But if the intraparty battle leaves the eventual presidential nominee too weak and the party too divided to defeat Trump in November, America will be the biggest loser in November.