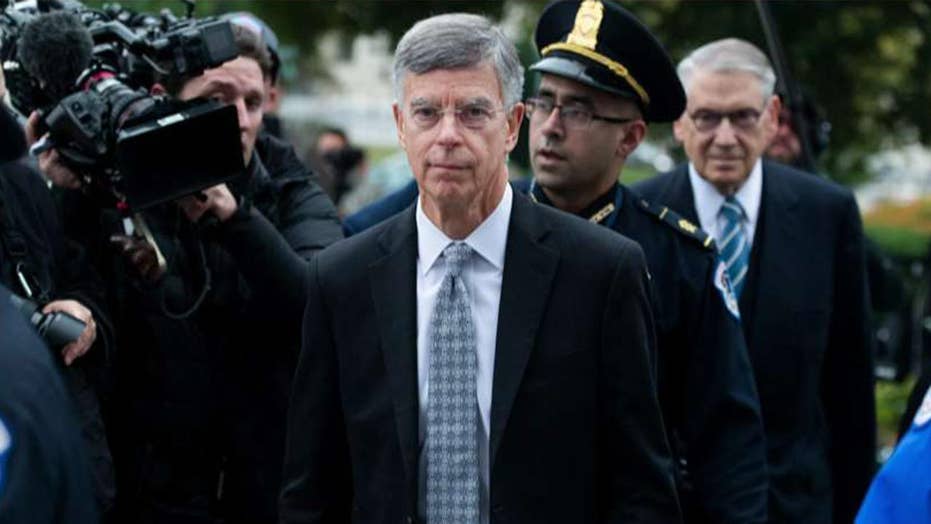 Steve Hilton: The truth about impeachment

Last week, the Democrats could barely contain themselves as they thought they'd found their smoking gun on Trump's impeachment:

Rep. Gerry Connolly, D-Va.: I think it's very damning. And you know, I think it puts a politically mortal peril at this presidency.

Rep. Andy Levin, D-Mich. This is my most disturbing day in Congress.

Rep. Jason Crow, D-Colo. It's shocking, it really is shocking.

"Shocking," "devastating," "mortal peril" ... they are so ridiculous, these people.

What got them so excited? The testimony of Bill Taylor, our ambassador to Ukraine, who apparently claimed the president wanted to withhold military aid and the White House meeting, unless Ukraine's new president publicly said he would investigate not just 2016 election meddling, but the Bidens, too.

Taylor's claim is also in his published witness statements. So what's the truth?

Well, we don't know all of it because this whole thing is still being run in secret. The Republicans calling out the secrecy has led to a new talking point for the Democrats and Trump-hating media. The facts are bad for the president, so all they can do is attack the process.

That is nonsense. And here's why -- with facts.

One, there was nothing new in Bill Taylor's testimony. Essentially, he just embellished what we heard weeks ago when a bunch of text messages were leaked.

Two, when Taylor was questioned about his quid pro quo claim, his story fell apart.

"What the Democrats wanted to believe was that Ambassador Taylor's testimony would support what the whistleblower said when in fact, his testimony established the opposite," Rep. John Ratcliffe, R-Texas, said on "Sunday Morning Futures."

Three, Bill Taylor's story was also contradicted by another diplomat closely involved in all of this, Kurt Volker. Volker was interviewed by the impeachment committee weeks ago, but you didn't hear the Democrats and the ruling class state media jumping up and down about that.

Why? Because, as we told you weeks ago, his evidence exonerated President Trump on the main impeachment charges.

​This was not the smoking gun or anything close. Bill Taylor is a bust.​

Looks like the Democrats' love for those career diplomats they have fallen over only extends as far as the ones who want to get President Trump.

So no, this was not the smoking gun or anything close. Bill Taylor is a bust.

He claims he is not political or biased and says he has worked for Republicans and Democrats. That's not the point! This is about populist versus establishment, insider versus outsider, and not Republican versus Democrat. This is the system striking back.

Of course, Bill Taylor is political. Of course, he is biased, just like all these career civil servants coming out of the woodwork. They want power without accountability. And the very people who lecture us about democracy and the rule of law put these bureaucrats on a pedestal instead of exposing them for what they are -- arrogant, stuck up knolls trying to take down a president who is challenging the system and its power.

And finally, if Bill Taylor is such a fine, outstanding, unbiased servant of the people, why the hell didn't he call on Ukraine to investigate the Bidens? Joe Biden has boasted about controlling aid to Ukraine.

Joe Biden: I said, "you're not getting a billion. I'm going to be leaving here." I think it was what? Six hours? I go, I said, "I am leaving in six hours. If the prosecutor is not fired, you're not getting the money." Well, son of a b---h, he got fired.

As we keep telling you, the real scandal is not the firing of the prosecutor. It is cash for gas -- billions of dollars of U.S. taxpayer cash controlled by Joe Biden going to Ukrainian energy interests, including Burisma, where his son was on the board.

How much taxpayer money did Joe Biden give to a Biden family business? Why didn't Bill Taylor want to look into that? Oh, because along with Biden, he is part of the establishment and this is how they roll.

And by the way, to all these Democrats pompously pontificating that it damages our national security to hold up Ukraine military aid, do you know who did that first? Your precious President Obama. He refused to arm the Ukrainians against Russia at all. It was President Trump who did.

This whole partisan impeachment farce is the biggest crock of you know what since the last one they put out there, which consumed this country for three years and proved to be nothing.

We know what this is about. They hate Trump. They hate you for voting for him in 2016, and they're terrified you'll reelect him in 2020 because Trump has got the economy booming. He has delivered his promises and the candidates they've got are all useless.

Finally, this is not just about the president personally. It's about his policy agenda and the populist movement. The system is striking back. They're trying to crush the populist revolution, and we have to fight to defend it.

Adapted from Steve Hilton's monologue from "The Next Revolution" on Oct. 27, 2019.