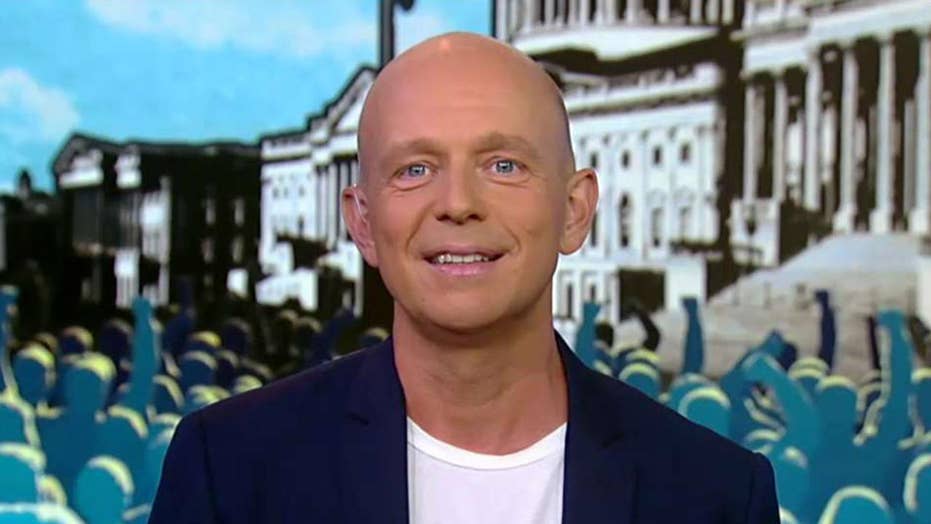 Steve Hilton: The truth about impeachment

The focus of investigations has been the president... but where is Hunter Biden?

I've seen some who oppose this Trump impeachment inquiry airily dismiss it - "Yeah, the president may have behaved badly on that call with Ukraine, but it's not impeachable. Let's wait till the election to hash it all out."

OK, except that's not how this is going to go down. It looks like this will end up with a trial in the Senate, and as we move towards that I want anyone who watches "The Next Revolution" to be well-informed about the details, about the actual evidence. Not the talking points, the evidence.

We had a lot of new evidence last week, and I want to take you through it.

Here's what hasn't changed. Last week we had new confirmation -- from an old friend -- of the real motivation for all this. Hillary Clinton repeatedly said this in various interviews: "He knows he's an illegitimate president."

EVER SINCE IMPEACHMENT INQUIRY WAS ANNOUNCED, IT'S BEEN GETTING CRAZIER OUT THERE

They've been wanting to get President Trump since 2016. They want to remove this democratically-elected president by non-democratic means, regardless of the evidence. It was so helpful of Hillary to confirm that last week. And so much for their pious lectures on democracy and the rule of law.

Last Sunday we went through the impeachment charges: Inviting foreign meddling and a quid pro quo of military aid. The foreign meddling claim is a joke. It happens every day in Washington through foreign government lobbying. The Democrats are up to their necks in foreign meddling.

Nancy Pelosi took money from Ukraine lobbyists. Chuck Schumer took money from Saudi Arabia and Mexico. These sanctimonious charlatans on their high horse over foreign interference in our democracy have no problem with it when it's donations to their campaigns and jobs for their relatives and when it's asking Ukraine for dirt on Trump, as Democratic senators did last year. And, of course, when it's funding a dossier to bring Trump down.

In any case, elected leaders always wear their government hats and that of a politician. The idea that Donald Trump committed an abuse of power by bringing politics into a foreign relationship is a joke. They all do it. Trump is just more open about it.

I saw it myself with President Obama and David Cameron. And when the Bush campaign asked British conservatives for dirt on Bill Clinton.

Today, the impeachment fanatics recite the mantra "dirt on a political rival." But with Ukraine and Joe Biden, it's not just any rival. And it’s not just any dirt.

If President Trump was asking the Ukrainians to look for whether -- I don't know, Andrew Yang -- owes back pay to some Ukrainian computer scientist who worked on one of his startups, that would be different. But the charge here is that a former vice president and his family acted corruptly in another country while in office. Of course, that should be investigated. And there's nothing wrong with asking that country to help.

The reason the Democrats and the ruling class are so up in arms about it is that it's exposing a central feature of their swampy business model.

What's not OK is using government policy and taxpayer dollars to push for an investigation if the motivation is purely political. The only really serious charge here is that President Trump did that by withholding military aid to Ukraine unless they promised to investigate Biden and that he did it for purely political ends.

Last week, I told you there were three reasons to reject that argument:

1. Trump is a well-known aid skeptic

3. According to the New York Times, the Ukrainians didn't know the aid was held up until a month after that now-famous phone call. How can there be a quid pro quo when one side didn't know about the quo, I said.

It turns out that the aid hold-up was seen by some U.S. officials as part of a purely political quid pro quo.

A text from Bill Taylor, the acting ambassador to Ukraine, said the following via text: "As I said on the phone, I think it’s crazy to withhold security assistance for help with a political campaign." The Democrats think that's their smoking gun.

The Democrats' obsession with scandal is out of touch and decadent. People want substance, not scandal.

But the reply from Gordon Sondland, the U.S. ambassador to the EU was this: "Bill, I believe you are incorrect about President Trump’s intentions. The president has been crystal clear no quid pro quos of any kind..."

Now, I'm just being honest with you here: those texts, on their own, without context, shook my faith in the White House position. And of course, the Trump-hating media were all over it. The New York times plastered the texts across their front page on Saturday with dramatic yellow highlights.

It left me wanting to know two things: (1) Were the Ukrainians told that the military aid was being held up unless they investigated Biden? (2) What was the intention - to investigate Biden on the grounds of vice-presidential corruption? Or because he was a political rival?

Now as luck would have it, we got more evidence on exactly those points.

The text messages were given to Congress by Kurt Volker, our special envoy to Ukraine. He also gave them an 11-page witness statement.

Some commentators called that statement  "devastating for the president," pointing to the fact that Volker debunks claims by Rudy Giuliani and the president about Ukraine's role in 2016 and Joe Biden's role in Ukraine. That is perfectly true.

But it's not the whole story. In fact, it's not even the main story.

Kurt Volker has been involved in every aspect of this story, dealing face to face with all the key players, all along: President Trump, President Zelensky, Zelensky's adviser Andriy Yermak, and Giuliani. Volker's been described by Trump critics as an "honest broker.'"

Listen to his actual evidence. On page three of his statement, Volker says:

"At no time was I aware of or took part in an effort to urge Ukraine to investigate former Vice President Biden. As you will see from the extensive text messages, I am providing, which convey a sense of real-time dialogue with several different actors, Vice President Biden was never a topic of discussion."

On page six, talking about President Trump delaying a meeting with Zelensky -- a delay that, based on the texts alone, the media cite as evidence of Trump pressuring Ukraine to investigate Biden -- Volker says:

"But I believed that the president’s long-held negative view toward Ukraine was causing hesitation in actually scheduling the meeting."

Nothing to do with investigating Biden. Just President Trump's concerns over Ukraine corruption, exactly as he's been saying.

On page seven, Volker reports on a meeting he arranged between President Zelensky's adviser and Rudy Giuliani:

"After they met, both Mayor Giuliani and Mr. Yermak called me to give me their impressions. Both were positive. Neither said anything about Vice President Biden."

Based just on the texts, the Democrats and their media allies have zeroed in on talk of a statement that the U.S. side wanted the Ukrainians to make. Again, this is cited as evidence of pressure to investigate Biden. But on page eight of his evidence, Volker says: 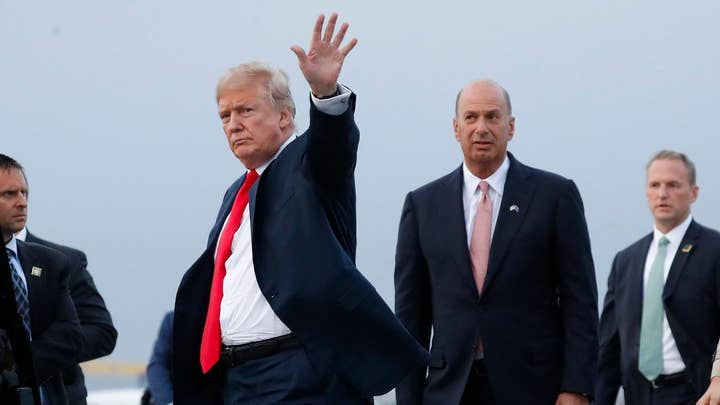 "On August 16, Mr. Yermak shared a draft with me, which I thought looked perfectly reasonable. It did not mention Burisma or 2016 elections but was generic. I conveyed this draft to Ambassador Sondland, who agreed it was an excellent statement. We had a further conversation with Mayor Giuliani, who said that in his view, the statement should include specific reference to 'Burisma' and '2016.' Again, there was no mention of Vice President Biden in these conversations."

On to the most serious charge against the president, that there was a quid pro quo on military aid. Here's what Kurt Volker says on page nine of his statement:

"The issue of a hold placed on security assistance to Ukraine also came up during this same time I was connecting Mr. Yermak and Mayor Giuliani. I did not perceive these issues to be linked in any way."

Got that? No link between the Giuliani investigation agenda and the aid.

Then finally on page 10 - what Volker was told at the time about the president's phone call by people who were actually on the call:

"I received a general readout via our charge and my own State Dept. staffer, as well as from Mr. Yermak. All said it was a good, congratulatory call, that they discussed the importance of fighting corruption and promoting reform in Ukraine, and that President Trump reiterated his invitation to President Zelensky to visit the White House."

Six times in an eleven-page statement the special envoy to Ukraine, the man at the center of all this, described even by Trump critics as an "honest broker" --  six times he said that he saw no evidence of efforts to investigate Biden as a political rival or to link that to aid in a quid pro quo.

The fact that no-one -- literally no one, as far as I'm aware-- has reported this just shows you how committed the media are to their anti-Trump narrative.

It's astonishing. These people are deliberately misleading you. Their contempt for Trump has destroyed their professional judgment.

In a week when we saw the unemployment rate again hit a 50-year low, we're reminded why Americans chose Donald Trump: Jobs and dignity after decades of stagnation and disrespect. Immigration brought under control after decades of open borders. China confronted after decades of sell-out and surrender.

The Democrats' obsession with scandal is out of touch and decadent. People want substance, not scandal. We'll explain to you the impeachment evidence for as long as this goes on

But for God's sake, can the Democrats please just get a grip, end this farce and focus on helping Americans have a better life?

Adapted from Steve Hilton's monologue on "The Next Revolution" on Oct. 6, 2019.