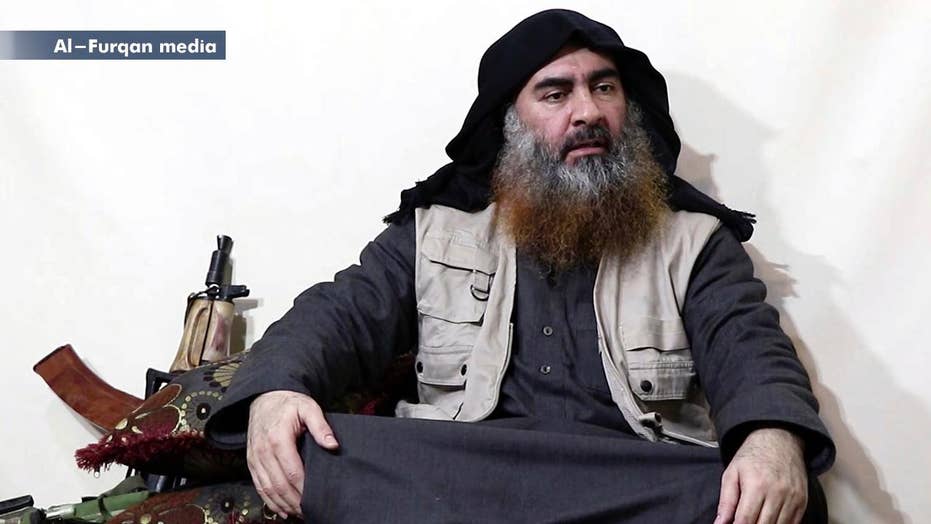 Trump's critics refuses to credit the president for the mission that killed ISIS leader al-Baghdadi; reaction on 'The Five.'

Last weekend, President Trump announced incredible news for our country. Abu Bakr al-Baghdadi, the founder and self-proclaimed “caliph” of the depraved Islamic State terrorist group, was eliminated by U.S. forces. Al-Muhajir, who was set to replace al-Baghdadi, was also taken out.

This is a victory for our military, our country and the world. It is a triumph for global security.

Our entire country should be celebrating this victory, just as we did when Osama Bin Laden was killed. Instead, the death of the world’s most wanted terrorist has been met by crickets. It’s appalling to see the “Washington bubble elite” brush off this massive feat.

The day after al-Baghadi was killed, some beltway insiders at the World Series actually booed Trump. The Washington Post, perhaps to downplay the significance of this achievement, produced a headline calling al-Baghdadi an “austere religious scholar.”

This shows just how out of touch they are with reality.

When you consider what al-Baghdadi and his barbaric terrorist regime have done, these partisan antics look even more disgusting.

When al-Baghadi founded ISIS, he had one goal in mind: apocalypse. He wanted to violently overthrow the world order and replace it with an Islamic caliphate.

We have seen how far they are willing to go to achieve that goal.

Twenty-one Coptic Christians were beheaded on a beach in Libya. A Jordanian pilot was set on fire inside a cage. Crucified bodies were hung up in conquered territories.

That liberals are attempting to minimize or distract from this news is insulting enough. However, they have taken further actions that directly threaten the future success of our ongoing campaign against ISIS.

Right now, Democrats are holding up passage of the National Defense Authorization Act (NDAA) and defense appropriations bills because they object to Trump’s border wall. These bills provide the critical funding and necessary authorities for our military operations to succeed. Without full defense funding, our military will not be equipped to maintain its edge against America’s enemies.

Democrats are putting politics over our women and men in uniform.

Over the last 50 years, there have been three separate occasions where military spending was cut by at least 25 percent – all from Democratic administrations.

That is precisely why Congress has passed the defense bill every year for nearly six decades, regardless of whatever political debate was going on at the time.

Now, Democrats are once again trying not to fund the military. They are putting politics over our women and men in uniform. They would rather obsess over the sham impeachment proceedings and the border wall than negotiate in good faith to pass the NDAA and fund the military.

This is absolutely reckless, because we still have more work to do in ending terrorism globally. Contrary to the left’s propaganda, our strategy in Syria has not changed. We have not abandoned our partners, the Kurds. We are still working alongside them and the Coalition to Defeat ISIS in Syria.

Under President Trump, we are still committed to our strategy to defeat ISIS, protect Iraq, deter Iran and support Israel.

Consistent with that strategy, we eliminated their territorial caliphate earlier this year. We have just taken out the current ISIS leader and his potential successor. Now, we will deny ISIS access to revenue from oil fields to prevent it from reconstituting itself.

We can achieve this mission if we give our armed services the unified support they deserve. Passage of the NDAA and defense funding bills, as well as a bipartisan celebration of al-Baghdadi’s death, is a good place to start.

Never forget, al-Baghdadi founded ISIS and inspired their many atrocities. This major victory warrants significant praise and lasting acknowledgment for the president and our military.

We can bicker about politics all we want – but fighting ISIS and funding the military should never be a partisan issue.

United States Senator David Perdue is the junior senator from Georgia and the only Fortune 500 CEO in Congress. He serves on the Armed Services, Budget, Agriculture, and Banking Committees.
ADVERTISEMENT