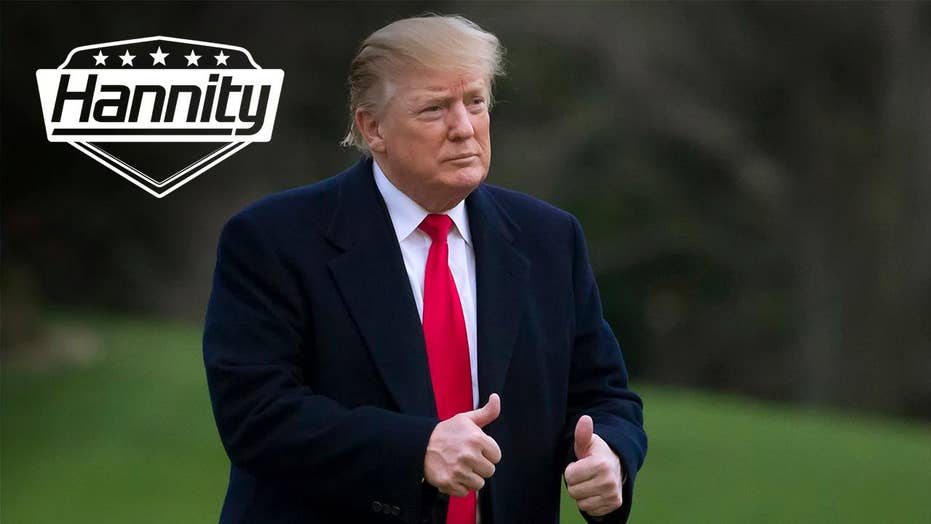 The Deep State's day of reckoning has now come. I want you to pay very, very close attention, especially all of you in the news media who tuned in to watch President Trump on "Hannity" Wednesday night. I hope you take some notes and learn something.

It is a disgrace that the media in this country has ignored what is the biggest abuse-of-power corruption scandal in our lifetimes because of what their groupthink and political agenda. Frankly, it has now evolved into a psychotic rage against a duly-elected president. They didn't want him to win. They were clear about that. When has anyone in the media ever reported on any of the president's record accomplishments? Have they ever done that once?

Let's start with Hillary Clinton.  The law, Espionage Act, 18 USC 793, is clear. She had an illicit private server in a mom-and-pop shop bathroom closet, and we know it contained -- James Comey told us -- classified, top secret, and marked classified information. She was grossly negligent in the handling of the classified information.

The obstruction law, 18 USC 1505 applies to subpoenaed emails that were destroyed, some 33,000 of them, you may remember. And the hard drives were acid washed? Nobody in the country knew what BleachBit was before Hillary Clinton. Then, of course, there was an aide breaking up smartphones and BlackBerries with hammers and removing SIM cards. And that is just the tip of the iceberg.

What would happen if I deleted 33,000 emails and did the same thing? I think I would probably be in jail today.

Don't forget about other potential violations -- perjury, false, misleading statements. None of this even includes the big scandals, like pay-for-play allegations, the Clinton Foundation, the Uranium One scandal, which the media ignored. Remember, we had William Campbell, an FBI spy inside of Putin's ring right here in America, chronicling bribery, extortion, kickbacks, money laundering. Wow. That deal still went through. A lot of money went back to the Clinton Foundation.

Remember James Comey, in his particular case, let Hillary off the hook for issues that every American would have been held accountable for. Remember, the email case? The exoneration being written in May of 2016, months before they ever interviewed her in July of 2016, just days before they cleared her, which he shouldn't have done,either. Remember, they change the words "gross negligence", the legal standard, and they put in the words "extreme carelessness."

By the way, there was no collusion. There was no obstruction. We know that Mueller did not make a decision on it. He left it to the attorney general, William Barr and the deputy A.G., Rod Rosenstein, who very quickly exonerated Donald Trump. He left the determination to both of them.

Don't be fooled by the media that's trying to spin all this. Comey is not the super patriot he portrays himself as. He loves the spotlight and loves himself. His malignant leadership of the FBI corroded the image of what is the finest law enforcement institution on the face of this Earth, filled with the greatest, hardworking, dedicated agents that protect and serve this country every single day. And frankly, it is those rank-and-file agents, frankly, that are glad Comey is gone.

Jim Comey and Clinton are not the only ones who must be held accountable. Obama's attorney general, Loretta Lynch, also now needs to be investigated over the secret tarmac meeting with Bill Clinton.

This goes directly against the department's ethics handbooks, which requires the A.G. to avoid any appearance of impropriety and potentially 18 USC 1505, obstruction of justice. And were the orders in the Russia investigation from the FBI really coming from the top of the DOJ? Well, we have to ask. What did Lynch know, and when did she know it? What did Barack Obama know? When did he know it?

And let's not forget, FBI lovers Peter Strzok and Lisa Page. They, too, need to be investigated for obstruction of justice. Remember Page texted Strzok in July 2016, mocking Lynch's statement about accepting the FBI's conclusions in the Clinton email case, writing, it was, "a real profile in courage," and she knows no charges will be brought." They knew the fix was in.

And you better believe they played an integral role in first clearing Hillary Clinton -- their chosen candidate that should win 100 million to zero -- and setting up an "insurance policy," aka, the Russia investigation against Donald Trump, just in case he won the election.

We need to make it that no future president has to endure what has gone on here. And that means the American people need to have faith that they will not be undermined by cowardly, corrupt, unelected bureaucrats that think they know better than we "smelly Walmart people."

Adapted from Sean Hannity's monologue from "Hannity" on March 27, 2019.