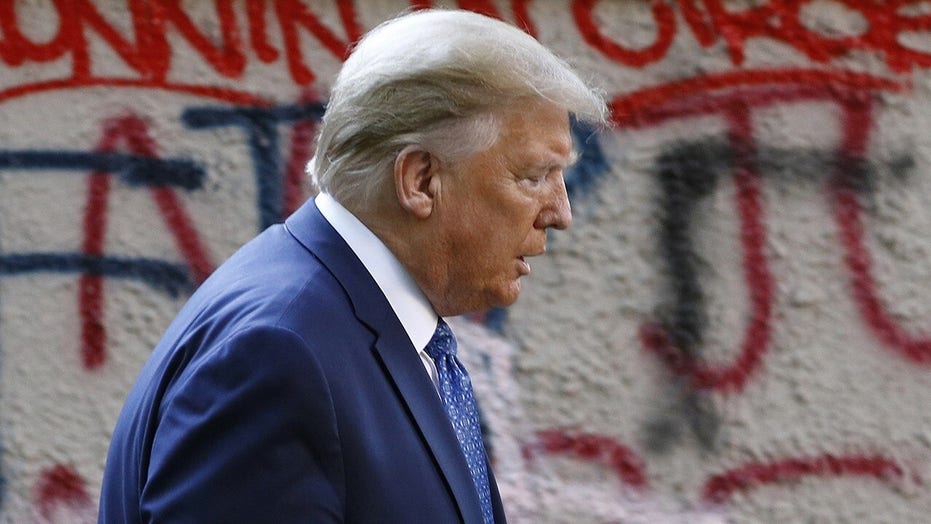 Will Trump’s handling of protests become one of the biggest issues heading into November election?

A week ago, in the wake of a possible flattening of the COVID-19 growth curve, President Trump’s campaign could maintain some optimism.

While polls suggested that the public trusted likely Democratic nominee Joe Biden as better than Trump at dealing with the health crisis, they continued to trust the president more on handling the economy. The polls were consistent with the idea that if he could convince the country to make the election about “who’s better for ensuring a strong American recovery?” he might be in a competitive position in November.

Then came the death by asphyxiation of George Floyd under the knee of a Minneapolis policeman.

DOUG SCHOEN: GEORGE FLOYD UNREST — ONLY THIS CAN SAVE DEMS FROM DEFEAT IN 2020

In a matter of days, President Trump – whose political superpower has been his ability to manage through chaos – appears unable to orchestrate a simple photo-op, and is besieged by indirect but clear sniping from the only living Republican ex-president, direct criticism from his first Defense secretary, and polls suggesting he’s disadvantaged in the GOP must-win states of Florida, Texas and Ohio.

His ability to “ride the bronco” is what enabled him to survive four corporate bankruptcies before starting a political career and navigate countless crises throughout his political career – from the Access Hollywood tape, the Mueller investigation, impeachment and even the COVID crisis through May.

The news may be dizzying. The tweets appear reckless. The threats may seem dire. But, to date, Americans have kept their eyes fixed on this rodeo.

Initially, the president appeared to be politically well-positioned in the face of the news. He tweeted his support for a Justice Department investigation. With video evidence clearly making the case that it was murder – and the Minneapolis DA initially not arresting any of the officers involved – his tweets made clear a desire to appear on “the right side” of the issue.

Then came a series of protests across the country that devolved into civic unrest in many cities.

Many argued that the protests – even the riots – were a justifiable response to a history of black Americans being killed by police. Indeed, the two largest cases of urban unrest were ignited by incidents of police attacking black people – the LA Riots in 1992 sparked by the videotape of police beating Rodney King, and the 2014 protests– and ensuing “Black Lives Matter” movement – sparked by police in Ferguson, Mo., killing a black teenager accused of shoplifting.

But even among those who justified the unrest, there was a sense that it, particularly the video of looting and violence, could result in a sense of “white backlash” and play into President Trump’s reelection effort. This is a president who used his inaugural address to promise to fight “American Carnage” and has successfully appealed to “white backlash” throughout his career.

Even among those who justified the unrest, there was a sense that it, particularly the video of looting and violence, could result in a sense of “white backlash” and play into President Trump’s reelection effort.

The history of urban unrest – starting with the 1967-68 riots, but extending through 1992 and 2014 – was consistent with the belief that Trump could benefit politically. Indeed, the 1968 riots helped both George Wallace and Richard Nixon run on “law and order” platforms, the 1992 riots arguably helped lead to the 1994 “Super Predators” crime bill, and the 2014 protests clearly, in the end, benefited Trump politically.

Indeed, many assumed that the response would help Trump successfully benefit from the 2020 unrest. Among those was Trump himself, who came out strongly arguing for “law and order” –criticizing governors who were not dealing sufficiently harshly with protesters, sending the U.S. military into Washington, D.C., and suggesting he was going to send them into other cities as well.

But so far, it hasn’t worked out politically as some expected. Trump’s poll numbers continue to decline – Biden currently leads him by eight points in the RealClearPolitics average – a larger amount than even Obama enjoyed when he first ran in 2008, and rather than voters reacting to video of urban looting, they appear more focused on pictures of the U.S. military occupying the Lincoln Memorial.

The mood has gotten so bleak that many administration insiders – both anonymously and on camera – have distanced themselves from the president’s actions. While his supporters may cry “disloyalty” – it’s evidence of what those insiders are sensing about November.

What has Trump – along with many analysts – been missing?

Second, they – and President Trump – are misreading what folks mean by “law and order.” Yes, it was very much about cracking down on violent crime. But if you go back to the way Nixon talked in 1968 – there was a heavy rhetorical emphasis on “bringing the country together” and a clear optimistic message that “America is great because her people are great.” It’s a deft balance that to date, President Trump has appeared unable to manage.

So far, the president seems to be holding tight – but in a way that’s only making his challenge more difficult.