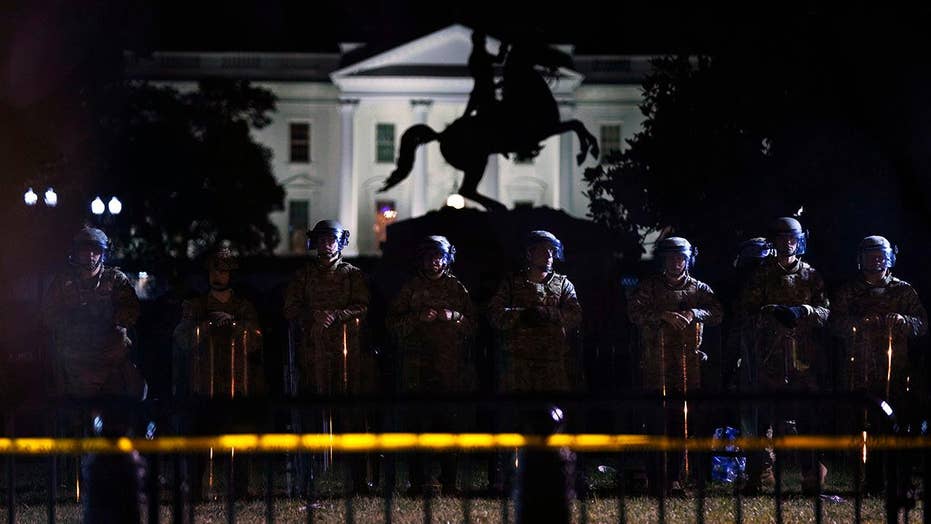 As violent protests sweep the nation and fury fills city streets in the wake of the murder of George Floyd, the 2020 presidential election is shaping up to be eerily similar to the 1968 campaign.

In 1968, the country was grieving from the assassinations of civil rights leader Dr. Martin Luther King Jr., and Sen. Robert F. Kennedy, who was on the path to claiming the Democratic Party’s presidential nomination.

The period preceding the 1968 election was a time of great civil unrest. There were riots across the country following Dr. King’s assassination, and the August 1968 Democratic convention in Chicago became a venue for protests against the Vietnam War — led by left-wing activist groups like Students for a Democratic Society — and culminated in a televised riot where police clashed with protesters.

LIZ PEEK: GEORGE FLOYD RIOTING – BIDEN DOESN'T GET IT. IT'S THE SAFETY, STUPID

As a result of that year’s civil unrest, which was also accompanied by inner Democratic Party division between the moderates and far left, Democrats embraced a more liberal foreign policy perspective while focusing mainly on social and racial justice issues, largely at the expense of economic issues.

Taken together, the party’s leftward movement and the accompanying civil unrest, which was associated with the far left, helped Richard Nixon’s “Southern Strategy” prevail in the 1968 election and in 1972, when he won by a 49-state landslide. Nixon’s approach appealed to the silent majority with a promise to restore “law and order,” while the Democratic Party was viewed as too far left.

Fast forward to 2020. The year began with a presidential impeachment, followed by a pandemic that has taken over 100,000 American lives and cratered the economy, and now is undergoing widespread civil unrest and violence that many are attributing to radical left-wing groups.

In the midst of these tragic riots and uncertain times, a similar hidden political opportunity exists for Trump as Nixon. On Monday, Trump described himself as the president of “law and order,” and said he was mobilizing the U.S. military to end “riots and lawlessness,” while calling the violent protests “acts of domestic terror.”

Further, it is clear that Trump is taking a page out of Nixon's book to deflect attention from our economic woes and the tragedy of the pandemic, while shifting blame to Democratic states, governors and mayors for not controlling the riots and unrest.

On Monday, Trump told governors on a call that they were “weak” if they did not use force against the protesters.

“If you don’t dominate, you’re wasting your time,” Trump said.

While the latest ABC News poll shows Biden with a 10-point lead over Trump nationally, the current unrest poses a hidden risk for Democrats of undermining their chances at the White House, especially if they fall into the trap that they did in 1968 and 1972 of not speaking out harshly enough against the disobedience, moving too far left and failing to deliver a unified economic message.

Further, any attempt by Democrats to attack Trump for the human toll of his failed response to COVID-19 will ring hollow, so long as our cities are burning.

The political risk to Democrats is becoming associated with the riots that have erupted in the wake of these tragedies and moving too far left in response, which would result in the party losing the White House and risking their House majority.

Make no mistake, there is no clear-minded American who was not horrified and heartbroken by the murders of George Floyd in Minnesota and Ahmaud Arbery in Georgia.

However, the political risk to Democrats is becoming associated with the riots that have erupted in the wake of these tragedies and moving too far left in response, which would result in the party losing the White House and risking their House majority.

In order to mitigate this risk, I propose the party follow a three-point plan.

First, Democrats must emphasize unity, which involves both parties working together, not polarization and division.

Second, Democrats must put forth legislation that is focused on underserved communities of color, which should be accomplished through a bold fourth stimulus bill that will get the economy moving by emphasizing business assistance and job creation.

Yet, Senate Republicans have deemed the Heroes Act — a $3 trillion stimulus package that passed the House — as “dead on arrival,” given the cost and the fact that it contains what Republicans are calling a “liberal wish list.”

Thus, Democrats should work to revise their fourth stimulus bill to be more moderate in cost and specifically focused on helping underserved communities and businesses.

Third, while Democrats can and should stand up for peaceful protests, they must draw a clear line at violence and civil disobedience, as well as looting, which we are seeing night after night. Further, Democrats must emphasize that violent protesters should and will be punished, and the party needs to mediate far-left voices that say otherwise.

With this three-point plan, Democrats can avoid a defeat similar to 1968 and 1972. However, if Democrats move too far left while allowing riots and violence to define their party, Trump and the Republicans will, like Nixon, emerge victorious.