Free markets, whether they be economic markets or the marketplace of ideas, represent American ideals. The free exchange of ideas communicates that for the most part, all are welcome to share their unique points of view – until recently. Certain American freedoms seem to be approaching “endangered species” status as big, powerful interests increasingly choose to manipulate their platforms to control speech.

As troubling as that is in a constitutional democracy, it’s not just the marketplace of ideas that are under attack, but the access to economic markets via commerce and banking. Case in point: PayPal.

It doesn’t take a legal scholar to be concerned about the message imparted by PayPal’s CEO, Dan Schulman, in a recent Wall Street Journal interview by Peter Rudegeair. In the article titled “PayPal CEO Grapples with Fringe Groups,” Dan Schulman explains who gets booted—and why. Schulman outlined the implementation of a political agenda that ultimately restricts ordinary Americans’ access to banking services.

Consider that, in an increasingly competitive market, PayPal remains the largest online transaction processor with an estimated 2018 payment volume of $581 billion. PayPal leads its industry, and its policies on access matter.

While regulators do not presently classify it as a bank, PayPal must comply with specific statutes and regulations that govern the financial industry.  For example, PayPal must work within our anti-terrorism and money laundering statutes. No reasonable person would object to Hamas front-groups or the KKK being denied access to PayPal. Thus, a laissez-faire, wide-open transaction processing system is not possible, and some “policing” of users is inevitable. 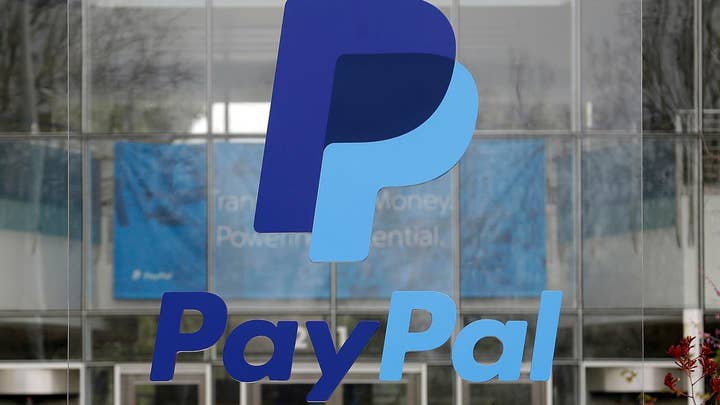 But it’s not just terrorists that the company is working to exclude.

The Journal interview gave Mr. Schulman a platform to explain how the company sees its public political activism, focusing on PayPal’s decisions cutting off service to various websites like Infowars. The article says PayPal has also cut off “far-left groups in Atlanta, Philadelphia, and Sacramento that identify as antifa, or anti-fascist.” However, none of these left-wing groups are identified by the PayPal CEO.

Schulman states without any sense of irony that “[p]robably the most important value to us is diversity and inclusion.” And, he adds, “our mission is to democratize financial access for all citizens so that managing and moving money is a right for everybody, not a privilege for the affluent.” If this strikes you as a bit grandiose, you are not alone. Apparently, the enormous social benefit that comes from processing consumer transactions is insufficient for PayPal’s ego, which helps explain the ease with which the company shifts into social justice mode.

When asked about how PayPal determines “who gets booted,” Schulman notes that there is a cross-company team that reviews internal and external flaggings regularly. Termination decisions are not ad hoc. PayPal removes 10 to 100 accounts a month, and no decision to terminate a relationship with a website or user has ever been reversed. There is effectively no appeal.

TUCKER CARLSON: YES, THERE IS A FASCIST THREAT TO AMERICA. BUT IT'S NOT FROM TRUMP

When asked “what outside groups are most helpful with in terms of informing PayPal’s decisions” Schulman volunteers that “the Southern Poverty Law Center (SPLC) has brought us things.” He adds, “We don’t always agree,” though this shocking admission is not followed up with meaningful transparency of how differences are resolved.

A great deal has happened since 2012, when an act of domestic terrorism took place at the Family Research Council. The shooter had been imbibing the SPLC’s animus toward pro-marriage, Christian groups, and decided to act violently, intending to kill as many people as possible.

He admitted this to the FBI. Schulman doesn’t seem to know that even the left wonders whether the SPLC has lost its way, as Politico asked. Politico also showed that the SPLC, like PayPal, doesn’t have much of an appeal process. Of course, the SPLC is not concerned with providing a method of appeal because their goal, as stated by their former spokesman Mark Potok, “is to destroy these groups, completely destroy them.” The SPLC’s tactics even prompted the respected City Journal to call into question the bullying of the SPLC.

As PayPal aligns itself with America’s hard left and seeks to politically weaponize the financial system, state and federal consumer finance and banking regulators have a moral obligation to evaluate the need to immediately start investigating this development and its injurious impact upon consumers.

In the meantime, PayPal and other companies that choose to use their influence and profits to advance a social agenda which half of their customers oppose should not be surprised when those customers choose other options. In this age of consumer activism, corporate activism cuts both ways. As corporations like PayPal align themselves with one side of this epic battle to redefine values and morality in America, conservatives of all stripes need to realize they have to not only cast a vote at the ballot box, but also vote as consumers with their dollars by taking their business elsewhere.