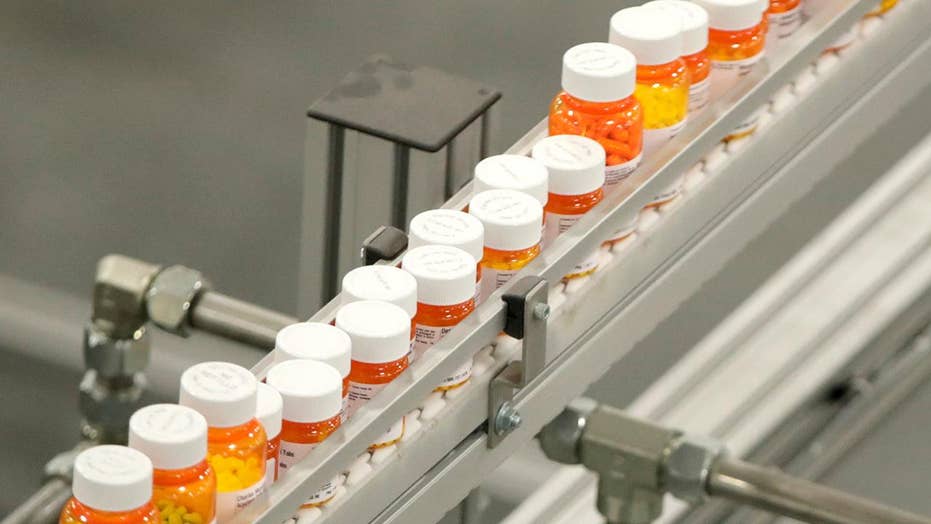 What is the Trump administration doing to lower the cost of prescription drugs?

Health and Human Services Secretary Alex Azar speaks with Steve Hilton on 'The Next Revolution'.

In a recent column, I explained why the president and Republicans are on their way to a stunning victory in 2020. I predicted that a big factor in this victory will be the clear juxtaposition between the president’s methodical, step-by-step approach to lower health care costs with more transparency, choice, and accountability and the Democrats’ calls for radical change that would throw people off of their private insurance and replace it with a government-run monopoly.

In this column, I want to sound a warning about how things could go wrong, particularly when it comes to the president’s efforts to lower prescription drug prices.

Until a few days ago, I would have argued confidently that the president and Republicans were well situated to win on the issue of drug prices in 2020.

NEWT GINGRICH: IF DEMS KEEP DOING THESE FIVE THINGS, TRUMP WILL HAVE A LANDSLIDE VICTORY IN 2020

A record number of generic drugs were approved by the FDA in 2017, saving consumers nearly $16 billion with lower-priced alternatives. The Republican Congress also passed, and the president signed, a bill lifting the pharmacy “gag clauses” that prevented pharmacists from informing patients if they could pay less for a medicine by paying cash instead of going through insurance (some generic drugs are so cheap that they can cost less than a co-pay).

This early progress has led to a stunning result: for the first time in nearly 50 years, the consumer price index for prescription drugs is falling.

With a proof of concept that increasing transparency and consumer choice can lower drug costs, the president and Republicans could point to even bigger reforms being developed using the same strategies. This record of results using common sense, market-oriented reforms would provide a positive contrast with the Democrats’ calls for big government price controls that would lead to rationing of care and fewer medical breakthroughs like gene therapy, which would both cure diseases and create an economic boom in America.

Unfortunately, the administration's efforts have hit several roadblocks in recent days. Worse, it appears some in the administration are abandoning market-oriented reforms that are working in favor of a more left-wing approach which would be a disaster.

Last week, a judge ruled that the administration could not require the prices of prescription drugs to be disclosed in direct-to-consumer advertising. This was a blow to efforts to use transparency and market forces to put downward pressure on drug prices.

Worse, the administration announced that due in part to misguided budgetary concerns, it was dropping its development of a rule in Medicare Part D to require all discounts and rebates given to pharmacy benefit managers (PBMs) to be passed directly to patients at the pharmacy counter.

Embracing watered-down, left-wing ideas to get something done on drug prices will not help American patients, who will face rationing and be robbed of future medical breakthroughs made possible through the free market, and it certainly won’t help politically in 2020.

This decision is incomprehensible. As I have explained before, this reform would have removed a huge incentive for drug manufacturers to constantly raise their prices in order to provide bigger discounts to PBMs. It is also a reform which would save seniors money in their out-of-pocket costs, making it easier for patients to follow their drug regimes, improving their health. Coupled with the fact that seniors would have started saving money in 2020, an election year, the decision to abandon the rule is both bad medicine and bad politics.

In an even more worrisome development, reports are that some in the administration are considering embracing Nancy Pelosi’s plan to impose price controls on drugs in Medicare by tying the rate of drug price increases to inflation. Unlike the rebate rule, using price controls to standardize the rate of price increases won’t reduce the amount seniors pay for their drugs. In fact, drug manufacturers will likely respond by increasing their initial prices.

In addition, in Pelosi’s plan, the penalty for raising prices faster than inflation is a tax, which would go to the federal treasury, not to seniors. So instead of reducing seniors’ drug costs, Pelosi’s plan would grow government.

The danger for President Trump is in is best summed up by this headline: ‘Trump leaning on Sanders-style ideas to save his drug plan’.

Embracing watered-down, left-wing ideas to get something done on drug prices will not help American patients, who will face rationing and be robbed of future medical breakthroughs made possible through the free market, and it certainly won’t help politically in 2020. The Democratic nominee for president will always be able to go further to the left than a Republican president offering “pale pastels” of liberal ideas.

Instead, President Trump should stick to “bold colors.” He should announce that the rebate rule will be implemented as scheduled; fight for more transparency in drug prices in the courts; and make clear that while he is open to bipartisan legislation on drug prices, he is not going to adopt price controls that would ruin the innovation base making the drug breakthroughs possible in the first place.

Combined with President Trump’s other positive reforms in health care, this would be a “bold colors” health care platform that would win in 2020.

Disclosure: Newt Gingrich is an adviser to companies and organizations in health care, some of whom would be impacted by the policies discussed in this article.