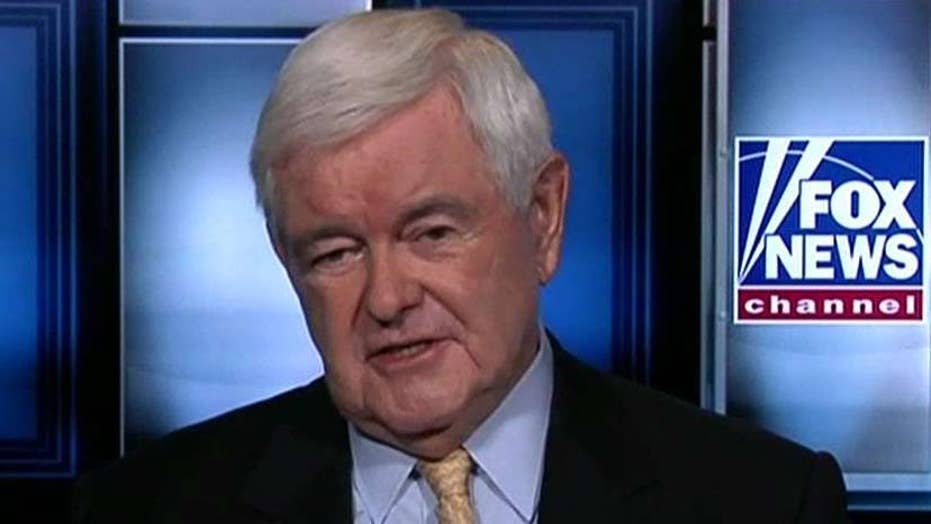 Newt Gingrich: Somebody needs to push Biden about Ukraine at Democrat debate

Joe Biden is in a mess that he probably can't get out of very easily, Newt Gingrich says after Hunter Biden breaks his silence on his foreign dealings.

When Democrats gather for the CNN-New York Times presidential debate on Tuesday, note there are five big “donkeys” in the room. (They can’t be elephants at a Democratic debate.)

First, the most obvious is that Hunter Biden earned $600,000 a year from a Ukrainian natural gas company. The left-wing media has done all it can to suppress questions about Hunter Biden. They correctly point out he has not been convicted of anything. Of course, given the universal agreement that Ukraine was extraordinarily corrupt (before the recent presidential election of a reformer) what would absence of conviction prove? It is close to President Nixon’s, November 17, 1973 press conference “I am not a crook” assertion.

There are two simple points about the Hunter Biden-Ukraine issue. What was his unique qualification to get that much money, which has added up to more than $3,000,000? Did his father really not know about it? Hunter has said he did tell his father, but his father has said he did not know. Given former Vice President Joe Biden’s routinely faulty memory, both could be true. However, most parents would know if their child was making $600,000 a year from a foreign company.

Second, do the other Democratic presidential candidates support Beto O’Rourke’s proposal to cut off tax deductibility for any church or other religious institution that does not recognize gay marriage? This is a boldly radical idea comparable to O’Rourke’s call for compulsory gun confiscation. How do the other candidates handle their slavish devotion to identity politics when faced with this bold but politically deadly proposal?

Third, since Sen. Elizabeth Warren, D-Mass., is now rated the front runner, how many candidates agree with her position that California’s public school gender indoctrination should be extended to the rest of the country? Because this is a new issue – only now emerging into public conversation – it is worth quoting a question from the recent CNN town hall.

Question: “How do you feel about schools teaching children about gender orientation and gender identity? In California, we're already starting those kinds of teachings and parents have been very upset and outraged. As a parent, I'm in full support of these teachings. How would you feel about it for the rest of the country?”

Do the other Democratic candidates agree that teachers' unions can force gender identity indoctrination on children as young as 3-years-old – and that parents have no right to withdraw their children from these compulsory classes? In many ways, this is a bigger assault on religion than O’Rourke’s tax proposal.

Fourth, do the presidential candidates agree with House Democrats, who on Sept. 26 passed the first step toward government health care for people in the country illegally by mandating a whole series of health activities, including electronic health records at the border?

Fifth, do the presidential candidates agree that House Democrats should continue to ignore the fair, open process used in the Nixon and Clinton impeachments? Do they agree that it was OK for Rep. Adam Schiff, D-Calif., to totally falsify President Trump’s words in his opening statement at a committee hearing, or do they believe it was unacceptably misleading in something as serious as an impeachment investigation?

These five questions would do a lot to clarify just how out-of-touch Democrats are becoming.