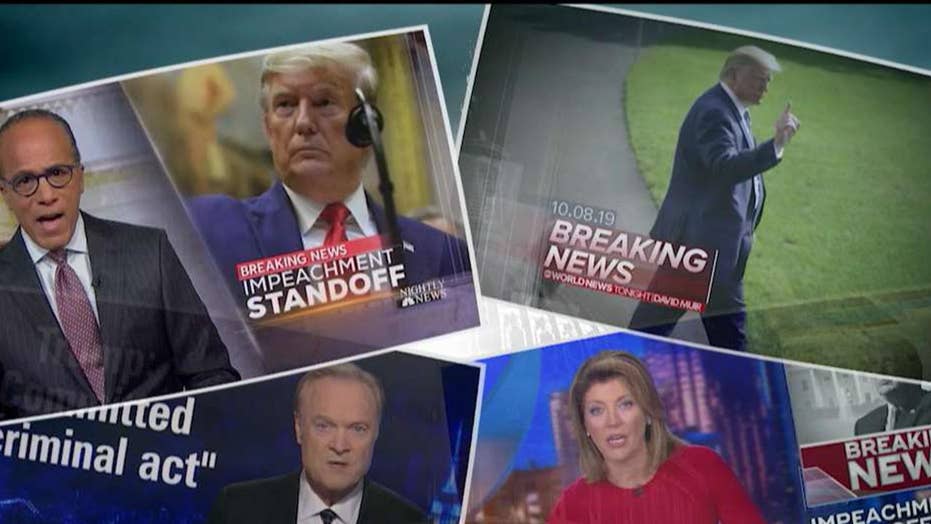 'MediaBuzz' host Howard Kurtz shows how some in the press are finding it difficult to stay neutral.

“There is no Deep State!” That’s been the anti-Trump media argument ever since President Trump took office and his administration started leaking like a cheese grater.

Lots of major news organizations made the claim, interviewing supposed insiders – from CNN to The New Yorker and The Nation.

New Yorker Editor David Remnick rationalized the pushback against Trump in 2017: “The problem in Washington is not a Deep State; the problem is a shallow man – an untruthful, vain, vindictive, alarmingly erratic President.”

Now there’s no attempt at hiding it. In one of the more blatant impeachment stories of the week, New York Times columnist James B. Stewart went on NBC’s “Today” show to tell everyone that Trump is right. Stewart was pushing a new book, “Deep State,” only he sees the Deep Staters as heroes – the same way the rest of his media buddies do.

Co-host Savannah Guthrie tossed him a softball question, clearly amazed that Trump would call out the government employees who are trying to sabotage his administration.

“And his central allegation is that there are people inside these government agencies actively working against him,” Guthrie said to Stewart. “What did you find?” (Watch the video. Guthrie’s hand movements and inflection are a great example of how journalists manipulate a news story in ways that are hard to tell from transcripts.)

Guthrie got the answer Trump supporters already knew: Trump was right, but Stewart gave his own personal spin so viewers knew the good guys.

“Well, you meet these characters in my book, and the fact is, in a sense, he’s right,” Stewart said, referring to the president. “There is a Deep State, there is a bureaucracy in our country who has pledged to respect the Constitution, respect the rule of law.”

Only leftists see a government employee working to overturn the result of a legal election as “positive.”

For those of you following at home, that’s another media narrative destroyed. Bury it next to the Russia collusion hoax.

Of course there’s a Deep State. Americans know this, which is why they should doubt the “whistleblower” who didn’t even have firsthand information.

The biggest proponents of impeachment outside the Deep State are what we should probably call the Shallow Media. Take NBC’s histrionic Political Director Chuck Todd. Recently he was screaming that “A National Nightmare Is Upon Us!” (One other than watching NBC.) Now he’s upset about Americans having “two sets of realities.”

What he was really saying is a bunch of Americans dare to think for themselves and realize that Todd has lost any sense of neutrality.

Only leftists see a government employee working to overturn the result of a legal election as “positive.”

“There is a 40 percent of the country that is only getting fed one reality; arguably, 60 percent are getting what I would argue is reality,” Todd said.

Hubris is a symptom of bad journalism.

But media outlets were more than willing to go all Schiff-ty and simply make things up.

In a memorable exchange, Trump tweeted how former President Barack Obama had said “he did not have the right to sign DACA” and did it anyway. Within minutes, the crafty folks at PolitiFact rated that “Mostly False.” But five minutes later, Washington Post White House reporter Seung Min Kim pointed out that PolitiFact was, in fact, wrong.

Then there’s one of my favorites: bias by omission. It’s not just the stupid and one-sided comments journalists make, it’s what they leave out.

For example, there’s the media fascination with former Secretary of State Colin Powell whining about “his party.” The problem is, NBC, MSNBC and CNN claimed “his party” was the Republicans, even though he’s endorsed Democrats for president three times in a row. He hasn’t backed a Republican for president since the 2004 election.

Pretty soon, they’ll be calling far-left Democratic presidential contender Sen. Elizabeth Warren, D-Mass., a Republican because she was one until 20 years ago. (Yes, she really was.)

The Matt Lauer disaster continues to shock even the most cynical media watchers. Investigative reporter Ronan Farrow’s new book “Catch and Kill” includes allegations that the former NBC “Today” host raped another NBC employee in a hotel room during the 2014 Olympics.

Farrow also slammed the network for blocking his investigation into movie mogul Harvey Weinstein. He eventually took his story to The New Yorker. Farrow alleged that Weinstein had tried to blackmail the network to make the story go away, claiming Weinstein “was aware of Lauer’s behavior and capable of revealing it.”

NBC cited the book in a story, saying it had reportedly “reached nondisclosure agreements with at least seven women who alleged harassment or discrimination at the company, including former employees with complaints about former ‘Today’ host Matt Lauer.”

Lauer denied the alleged rape but said he engaged in an “extramarital, but consensual, sexual encounter.”

Social media companies are caught between a rock and a hard place. They hit the scene as free-speech venues and have gradually restricted speech more and more. Now Facebook has taken a positive step in support of free speech and many in the media don’t like it.

The Trump campaign created an ad about former Vice President Joe Biden’s involvement in Ukraine. The reaction was swift. CNN refused to run the ad and NBCUniversal (the folks dealing with the Lauer rape allegations) wouldn’t run it either.

Team Biden demanded Facebook take it down as well. But the company refused, arguing it doesn’t fact-check political speech.

Sen. Warren took out an ad showing Facebook CEO Mark Zuckerberg shaking hands with Trump and pretending “Facebook just endorsed Donald Trump for re-election.” She admitted it wasn’t true, but remained furious that Facebook wouldn’t play the role of referee so her campaign could try to ban Trump ads.

It might not seem like a big deal, but Facebook is facing constant calls to regulate speech. It’s nice to see the social media giant go all Nancy Reagan and “just say no!”