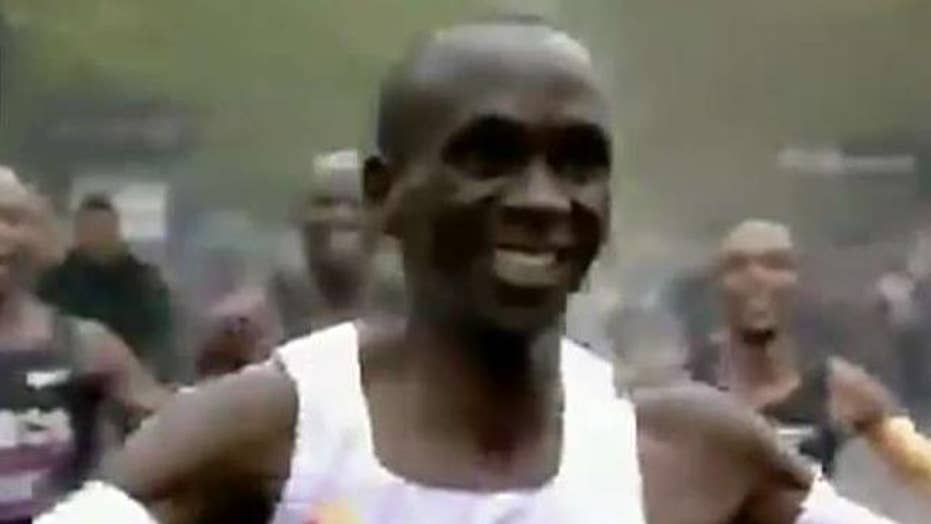 Eliud Kipchoge completes race in 1 hour, 59 minutes and 40.2 seconds on the run in Vienna, Austria.

History is made by determined men and women who shake their heads when they hear the word “impossible.” Eliud Kipchoge joined their ranks Saturday when he became the first person to run a marathon in under two hours – a stunning achievement that seems like something only a comic book superhero could do.

The Kenyan runner finished the 26.2-mile course in Vienna in an amazing 1 hour, 59 minutes and 40.2 seconds. The 34-year-old Olympic champion and world record holder said afterward:  “I am the happiest man today."

Aided by a pace car and a laser designed to show him the ideal place to run on the road, along with fellow runners tagging along to help him maintain his clip and cadence, Kipchoge’s time won’t technically qualify as a world record.

Those caveats may lead critics to try and diminish the magnitude of the Kenyan’s magnificent feat. But the fact remains that he’s the first human to break the two-hour barrier in the world’s most historic distance run.

Prior to the start of his incredible run, Kipchoge reflected on the larger meaning and purpose behind the challenge.

“In breaking the two-hour barrier, I want to open minds to think that no human is limited,” Kipchoge said. “All our minds, all our thoughts are parallel.”

Kipchoge’s accomplishment brings to mind Sir Roger Bannister’s breaking of the four-minute mile on May 6, 1954. At the time, many experts considered it impossible for any human to run that fast. In fact, some medical experts predicted the lungs would collapse under such pressure.

What is your equivalent of the sub-two-hour marathon? Allow Kipchoge’s incredible accomplishment to give you permission to dream again – and take that first step. Go for it.

But Bannister refused to believe the critics. He increased his training, refined his speed workouts and pursued the goal with unbridled enthusiasm and ambition.

Believe it or not, Bannister actually spent the morning of his race working at his hospital job. Outside the weather worsened. But when Bannister toed the line he believed the goal was within reach – because he believed nothing was impossible.

Because Bannister had shown that the seemingly impossible was possible.

It strikes me that Kipchoge’s accomplishment will inevitably usher in a slew of record marathon times – because he has demonstrated that a person is capable of running faster than many thought anyone could.

Most of us will never run a marathon, let alone compete for a world record time. But all of us have hopes and dreams – and many of us have been told those aspirations are impossible.

In the early 1960s, President John F. Kennedy famously asked American aerospace engineer Wernher von Braun what it would take to build a rocket capable of taking man to the moon.

The scientists replied: “The will to do it.”

The answer applies to a lot of the lifelong dreams that millions of us have.

Perhaps your dream is to start a business, build a new home, write a novel, climb a mountain, take a trip around the world, or do something else that sounds impossible.

There are probably all kinds of reasons why you haven’t been able to reach your goal. Life gets busy and responsibilities have a way of changing our direction – and for very good reasons. You have a mortgage, kids to feed, college tuition to pay.

But I wonder if we hold back because we fear our aspirations are nothing more than pipe dreams – impossible goals.

Eliud Kipchoge set a goal. He made a decision. Then – despite all the doubters and naysayers – he made a commitment to train and try and break the marathon record.

What is your equivalent of the sub-two-hour marathon? Allow Kipchoge’s incredible accomplishment to give you permission to dream again – and take that first step. Go for it.

We should all take comfort in the wise words the Rev. Norman Vincent Peale, author of “The Power of Positive Thinking.”

“Shoot for the moon,” Peale wrote. “Even if you miss, you’ll land among the stars.”