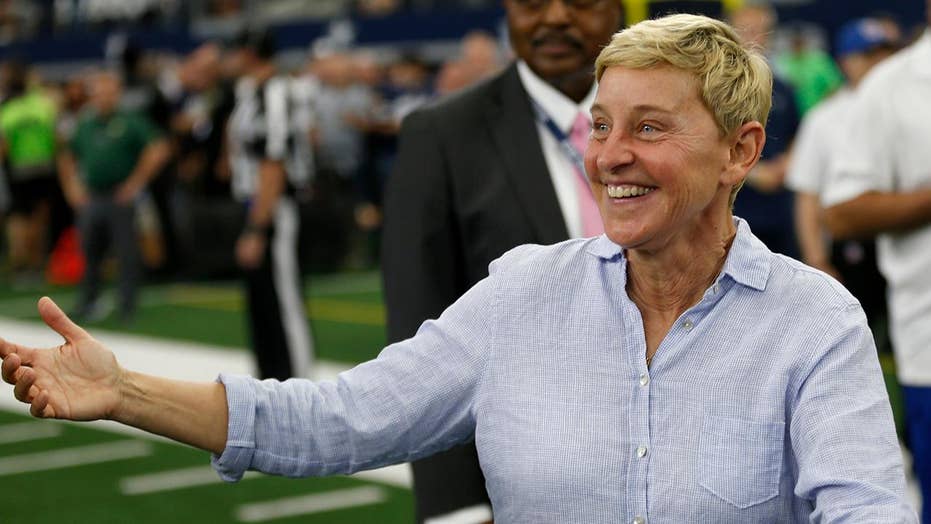 In a deeply polarized nation, Ellen DeGeneres deserves praise for practicing tolerance toward others and not choosing her friends based on how they vote -- an anomaly these days, especially in far-left Hollywood and the #Resistance movement, whose rabid followers have allowed their political persuasions to extinguish any semblance of civility, open-mindedness and respect for different points of view.

Luckily for American pop culture, Tinseltown still has a sliver of rational folks within its city limits. In DeGeneres' case, she spread goodwill at a football game in Texas last weekend and did more to unify the country than half the pols in Washington.

It started with a photograph that went viral of the affable talk show host and former President George W. Bush sitting next to each other at a Dallas Cowboys game, smiling and enjoying each other's company. That should be viewed as positive, but it instead triggered an onslaught of online backlash from the left, so much so that DeGeneres was compelled to address on her hit TV show the Twitter mob who lashed out at her for sitting next to a conservative and being friendly toward him.

CAROL ROTH: ELLEN DEGENERES AND MR. ROGERS -- AMERICA JUST GOT A REMINDER ABOUT WHAT IT MEANS TO BE HUMAN

"When we were invited, I was aware that I was going to be surrounded with people from very different views and beliefs. And I'm not talking about politics. ... I was rooting for the Packers," DeGeneres joked. "So I had to hide my cheese hat in Portia's purse."

"People were upset," DeGeneres said, referring to the social media trolls who were unhappy about the unorthodox friendship. "They thought, 'Why is a gay Hollywood liberal sitting next to a conservative Republican president?' ... A lot of people were mad. And they did what people do when they're mad: They tweet."

"When I say, 'Be kind to one another,' I don't mean only the people that think the same way that you do," she said. "I mean be kind to everyone."

DeGeneres finished by thanking Dallas Cowboys owner Jerry Jones and his daughter, Charlotte Jones, who invited her to the game, as well as George and Laura Bush, for a "Sunday afternoon that was so fun."

Appreciative of her kind words, George Bush's spokesman, Freddy Ford, told CNN via a statement this week: "President and Mrs. Bush really enjoyed being with Ellen and Portia, and they appreciated Ellen's comments about respecting one another. They respect her."

Can you imagine how much better off our country would be today if everyone were to practice that type of tolerance, respect and genuine kindness toward one another? It's a utopian fantasy, perhaps, especially as our nation marches toward the impeachment of the president, which the half of the nation who voted for Trump believes is a political hit job, not a legitimate inquiry.

Nonetheless, all Americans should follow DeGeneres' lead and practice tolerance for one another despite political differences. After all, America was founded on the notion of freedom in all its forms: freedom of speech, freedom of thought and the liberty to cultivate one's own beliefs, political and otherwise.

And come Election Day, we should select our representatives without prejudice or penalty.

No one should take for granted the enormous sacrifices our brave military and veterans have made throughout our nation's history to protect those precious liberties. As bestselling author Nicholas Sparks expressed in his novel "Safe Haven": "It's never too late to do the right thing."

That "right thing" in American pop culture today is to listen to one another more and discriminate less.

If an entertainer and former president are leading the way, God bless. That's a bandwagon all Americans ought to follow.