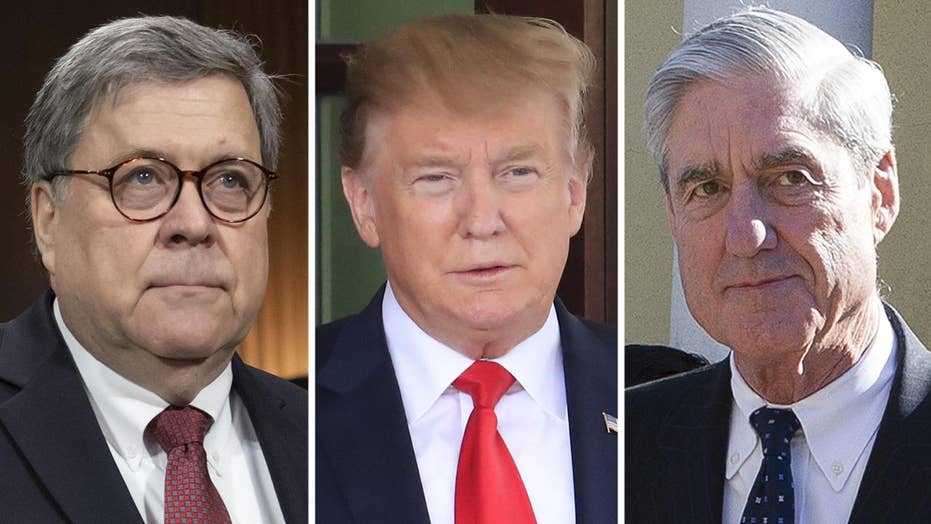 As the media and Democrats lose control of their fairy tale claim that there was collusion between Russia and the Trump presidential campaign to elect Donald Trump president, it is fascinating to watch them flailing about, doubling and even tripling down on a hoax and conspiracy theory.

Now Trump opponents have a growing sense of impending dread that the truth of what took place over the last several years might actually come to light.

We now have a real attorney general in William Barr. He refuses to cower in the face of careerists at the Justice Department and FBI, and he faces down congressional Democrats for the political hacks they are.

SARAH SANDERS: RUSSIA INVESTIGATION IS OVER, 'TIME FOR DEMOCRATS TO MOVE ON'

Barr has stated clearly that he believes there was spying on the 2016 Trump campaign. He has said there are multiple investigations currently taking place regarding illegal leaks from the Justice Department and FBI. And he has pledged to get to the bottom of apparent abuses of the Foreign Intelligence Surveillance Act (FISA).

Is it any wonder that there have been concerted attacks on Barr in recent weeks by Trump opponents to delegitimize the attorney general?

Justice Department Inspector General Michael Horowitz’s report on FISA abuses will be coming out later this month or in June. We will then get some clarity and a detailed explanation of what took place regarding the FBI’s FISA applications to conduct surveillance of communications involving Carter Page, a foreign policy adviser on the Trump presidential campaign.

The only way we can deal with this abuse is to have serious consequences for these actions. People must go to prison for breaking the law.

As all of this is taking place, President Trump has said he will release the unredacted applications to the Foreign Intelligence Surveillance Court to authorize surveillance under FISA.

What we know right now is that former FBI Deputy Director Andrew McCabe testified under oath to the House Intelligence Committee in December 2017 that the surveillance applications would not have been possible without the Steele dossier, a collection of memos assembled by former British spy Christopher Steele.

The dossier was described by former FBI Director James Comey as “salacious and unverified.”

We also know that this was substantiated by a memo from Rep. Devin Nunes, R-Calif., and a memo for Republican Sens. Chuck Grassley of Iowa and Lindsey Graham of South Carolina.

The senators wrote in their memo that several of FISA applications were almost wholly based on the unsubstantiated Steele dossier.

There are rumors that the Horowitz report will be devastating to some individuals who were involved in the FISA process. What will likely happen after the release of the report is that Barr will use it as the basis to appoint and empower someone within the Justice Department to investigate the matter further. That person will be given the power to impanel grand juries, use subpoenas and seek indictments for prosecution.

Many of us have believed for the last several years that a small, but extremely powerful cabal within the intelligence community and law enforcement felt – because of their self-righteous arrogance and partisan leanings – that they could use the immense power of the surveillance state to conduct a partisan attack on a political opponent.

These officials felt justified in their actions because they believed Donald Trump was not a suitable person to be president of the United States and because they had policy differences with Trump.

All of what we have seen over the last several years has revealed the FISA safeguards are an utter sham. If FBI agents and Justice Department lawyers are willing to lie and falsify information to the Foreign Intelligence Surveillance Court – and more importantly, if there are no consequences for those actions – then FISA is a joke.  This also means that our civil liberties are a joke and we will have accepted a police state that can use a piece of partisan propaganda or anything else as a justification to spy on private citizens.

In addition, it appears that some in that cabal feared Trump becoming president because they believed he would demand great accountability and transparency inside of the intelligence and law enforcement community.

I hope that investigations likely coming out of the inspector general’s report will lead to answers regarding former CIA Director John Brennan’s role in giving credence to the Steele dossier.

And I hope the inspector general’s report will provide answers to why the initial FISA application authorizing surveillance of Page was approved and then renewed three more times.

I suspect that the Foreign Intelligence Surveillance Court judges took the FBI at its word and that someone who is guilty at a minimum of the crime of falsifying by omission did not admit to the court that the applications were based on a piece of partisan propaganda.

All of these things are deeply troubling because our surveillance and law enforcement regimes are based primarily on trust. Trust that those seeking FISA applications to surveil American citizens are being honest, and trust that they are above reproach.

The problem that we now confront is that the trust placed in these people and in the process has been shattered. We must remember that the Foreign Intelligence Surveillance Act was enacted in response to abuses at the FBI under Director J. Edgar Hoover, who headed the bureau from 1924 until his death in 1972.

During the Hoover years, the FBI spied on Americans based on suspicions without verified evidence. Targets of the spying included civil rights leader Martin Luther King, members of Congress and Vietnam War protesters.

As a response to these abuses, the FISA regime was created. FISA requires the FBI to have verified evidence that it must submit to the Foreign Intelligence Surveillance Court to gain approval to spy.

All of what we have seen over the last several years has revealed the FISA safeguards are an utter sham. If FBI agents and Justice Department lawyers are willing to lie and falsify information to the Foreign Intelligence Surveillance Court – and more importantly, if there are no consequences for those actions – then FISA is a joke.

This also means that our civil liberties are a joke and we will have accepted a police state that can use a piece of partisan propaganda or anything else as a justification to spy on private citizens.

The only way we can deal with this abuse is to have serious consequences for these actions. People must go to prison for breaking the law.

I hope that in the midst of all of this, Attorney General Barr and FBI Director Christopher Wray will realize that beyond serious consequences, there must be radical transparency to return trust in the Justice Department and FBI.

Barr and Wray need to understand that their greatest loyalty is to the Constitution, not to institutions, because it is upon that great document that those institutions rest. The Justice Department and FBI do not exist for the sake of the institutions, but to protect and guard our civil liberties and the rule of law. We would all do well to remember that.