After watching the dueling prime-time speeches last night, it was easy to come away with the idea that the dispute is simply over the president’s demand for wall funding and the partial government shutdown. As such, it should be easy for the president and Dems to cut a split-the-difference deal and move on to the next problem.

After all, isn’t that why they were hired?

If only things were as simple as they appear. In fact, the Democrats’ refusal even to consider any kind of border barrier and other serious measures illustrates that the dispute is merely a proxy for the real issue dividing the nation: 2016.

Like generals fighting the last war, Nancy Pelosi and Chuck Schumer are fixated on the last presidential election. Their refusal to let it go and get on with governing in a divided Congress is a shameful sign of how radical their party has become since Trump’s election. 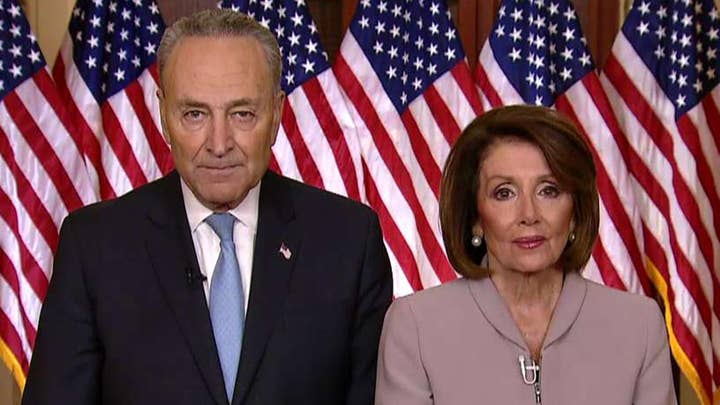 This is the crisis America faces — Democrats still do not accept the legitimacy of his victory. And so anything he says is treated as unworthy and untrue, even when Americans can see with their own eyes that much of the southern border is essentially wide open for anyone who wants to cross it.

And many do each day, with Fox News reporting that Homeland Security Secretary Kirstjen Nielsen told lawmakers that 161,000 family units crossed the border in fiscal 2018, a 50 percent increase in a year. She also reportedly said 60,000 unaccompanied children crossed last year.

Imagine that. And the numbers have been surging even more in recent months, with migrants rushing to escape murderous violence in Central America and get here before laws are tightened or barriers added.

Throw in sex trafficking, a veritable river of narcotics and gangs and there is no question that Americans are suffering enormous consequences from their government’s failure to secure the border and provide public safety.

It is indeed painful to see so many destitute people looking for a better life, and the recent deaths of two young children who made the hazardous trek ­illustrate the dangers. But it is also extremely painful to watch America dissolve into a borderless society where laws and order are sacrificed out of bitterness and hatred for a president who won an election fair and square.

Trump tried to capture the gravity of the situation by citing a raft of statistics and highlighting individual cases where vicious crimes were committed by illegal immigrants. One involved the recent murder of a California police officer, Ronil Singh, allegedly by a Mexican man in the country illegally.

Singh, the father of a 5-month old son, was a legal immigrant from Fiji.

“How much more American blood must we shed before Congress does its job?” the president asked in one chilling sentence.

Trump was restrained and economical in his delivery, but it wouldn’t have mattered if he had jumped on top of the Resolute Desk and shouted. Schumer and Pelosi were determined to bury him in mud no matter what he said or how he said it. 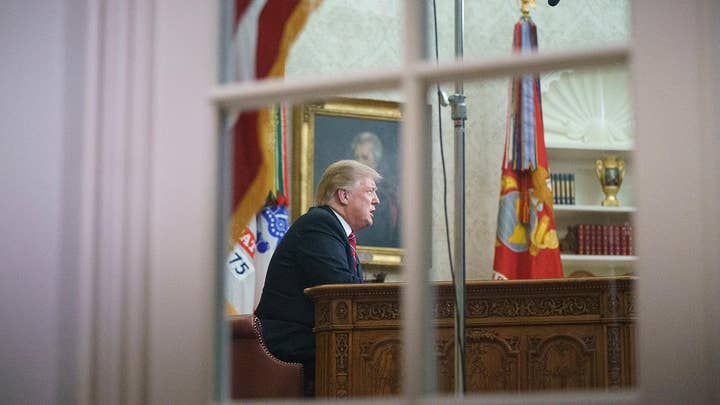 One indication was their slanderous claim that he had “manufactured” a border crisis that doesn’t exist. They even suggested he had no right to use the Oval Office for such an address. It’s not clear whether they are reciting MSNBC talking points or providing them to their media handmaidens.

Either way, they offered nothing but insults and vague references to “border security” without describing a single action they would support that would stop the entire population of Central America from coming to the United States illegally.

Fortunately, the public is still smarter than they realize. A Morning Consult/POLITICO poll released Tuesday found that 42 percent of respondents agree with Trump that illegal immigration is a crisis, while an additional 37 percent see it as a problem, with just 12 percent seeing nothing amiss at the border.

To judge by their remarks, Schumer and Pelosi are among the 12 percent. Their only complaint is that Trump isn’t nice enough to illegal crossers.

For the 79 percent who sen­sibly think the nation faces either a crisis or a problem, the question becomes what to do about it.

CLICK HERE TO READ MICHAEL GOODWIN: BUILDING THE WALL WILL PREVENT MORE TRAGEDIES AT THE BORDER

Now consider this: Our border with Mexico is nearly 2,000 miles long. To put that in perspective, it is slightly longer than the distance from New York City to Denver.

With existing barricades covering just about 30 percent of the huge span, the president is proposing a modest expansion of them, while also proposing technological and manpower ­additions, ranging from judges to border agents to law enforcement.

Trump also wants to add health specialists and more beds to alleviate what he calls a “humanitarian crisis” and a “crisis of the soul.”

It is indeed painful to see so many destitute people looking for a better life and the recent deaths of two young children who made the hazardous trek ­illustrate the dangers.

But it is also extremely painful to watch America dissolve into a borderless society where laws and order are sacrificed out of bitterness and hatred for a president who won an election fair and square.

Not so long ago, Democrats, including Schumer and Pelosi, believed that borders meant something. Trump shouldn’t stop reminding them of that and speaking up for the many Americans who still do.