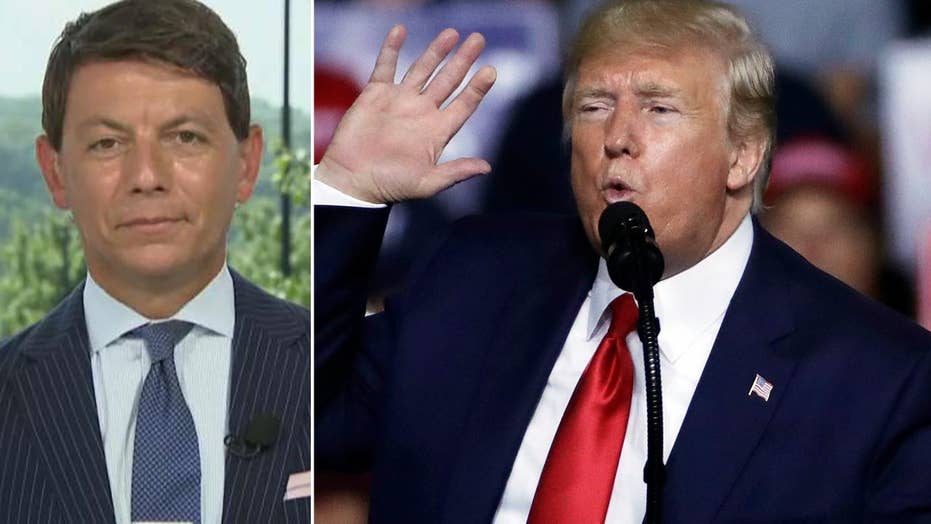 With just 441 days until Election Day, Donald Trump faces political peril and economic woes. That is a deadly combination for any politician, but especially for this president.

Start with the latest Fox News Poll that shows Trump losing to the top four Democratic candidates for president. He loses to Joe Biden by 12 points (50 percent to 38 percent), Bernie Sanders by nine (48-39), Elizabeth Warren by seven (46-39), and Kamala Harris by six (45-39). Not only does Trump lose, but his numbers are also stuck in the high 30s. The president has only broken out of the 30s on this measure once since 2015, when he hit 40 percent in March 2019.

But there is more bad news for Trump. His favorability rating is under water. Trump is viewed unfavorably by 56 percent of voters, which is only one point lower than his worst rating of 57 percent in October 2017. Furthermore, 59 percent are dissatisfied with the way things are going in the country. And 46 percent state that the tariffs Trump imposed are hurting the economy.

If that wasn’t bad enough, a staggering 59 percent of voters think Trump is tearing the country apart.

Overall, 52 percent disapprove of the way Trump handled the latest mass shootings in El Paso and Dayton, while 46 percent believe he has made the country less safe from a mass shooting by an American citizen. The poll also shows that 90 percent support criminal background checks, including at gun shows and private sales; 81percent support police temporarily taking guns from people who may be a danger to themselves or others; and 67 percent support a ban on assault rifles and semi-automatic weapons. If Trump doesn't act on these three measures he will pay a price for it in November 2020.

What is behind these bad poll numbers? Trump has a problem he can’t fix: Women.

Trump trails the top four Democratic contenders. His favorability rating is under water. The strong economy he touts is anything but.

When you look at the cross tabs of the Fox Poll it is clear women have turned on Trump in such large numbers and across so many demographics it is impossible to ignore … or change. Women of every color, age, and income reject Trump in this poll.

Trump seems to know he’s unpopular. On the same day the Fox News Poll was released Trump made his case for reelection at a rally in Manchester, NH: “You have no choice but to vote for me or your 401k is going down the tubes... Love me or hate me.”

Did you check your 401k last week when the market tanked on fears of a recession?

The strong economy Trump touts is anything but and the signs are obvious.

First, Trump cut taxes and said it would pay for itself. Instead, it has exploded the deficit. President Barack Obama inherited a trillion-dollar budget deficit in 2009, but it was down to $600 billion by the time he left office. In just two years, thanks to tax cuts, Trump has taken the deficit back to a trillion dollars. And on "Fox News Sunday," White House Economic Advisor Larry Kudlow admitted that the administration is looking at more tax cuts.

Next, Trump said China would bear the costs of his trade war with them. Really? Trump’s suspension of additional tariffs is an admission that they have been hurting American consumers despite his claims to the contrary. In the Fox News Poll, 46 percent said tariffs were hurting the economy. Americans know the cost of everything has increased while their paychecks haven’t increased. Finally, the markets made their own statement on fears of a recession when the Dow dropped 800 points Wednesday and bond markets also flashed warning signs.

The fact is Trump’s best economic growth is 3.5 percent in two quarters out of the 10 quarters he’s been in office, CNBC's John Harwood reports, adding that same growth figure, 3.5 percent, is Obama’s seventh best quarter, George W. Bush’s eighth best, and Bill Clinton’s 17th best. Yet, Trump claims his economy is the best ever. Far from it.

Numbers don’t lie. Under the current circumstances, Democrats should win the House, Senate, and White House in 2020. The warning signs are there for all to see. Ignore them at your peril.