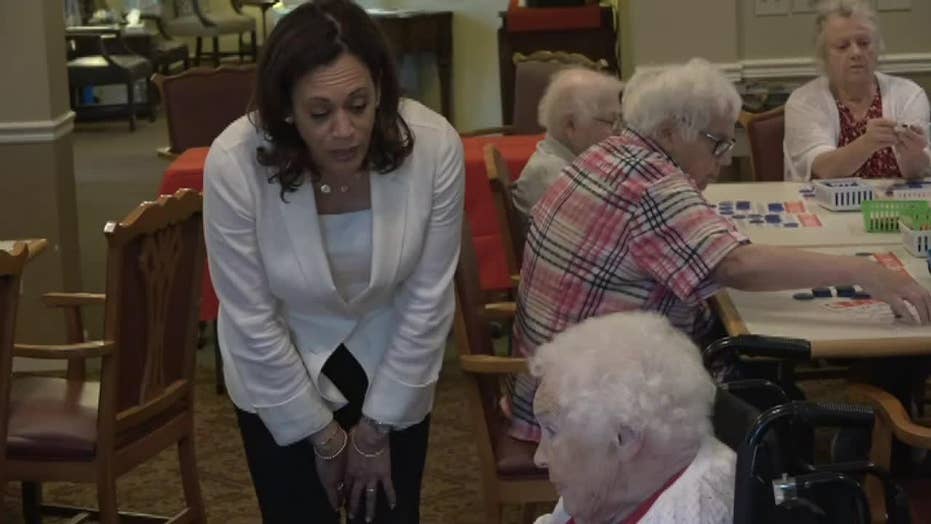 Kamala Harris is told by an Iowa senior citizen resident to 'leave our health care alone' during a visit to a senior living center.

Sen. Kamala Harris, D-Calif., had a run-in with the Greatest Generation on Aug. 12. Roberta Jewell, a resident at the Bickford Senior Living Center in Muscatine, Iowa, told the Democratic presidential hopeful to "leave our health care alone."

Like many Americans, Jewell is reluctant to embrace the "Medicare-for-all" plans Harris and several of her Democratic colleagues have proposed. The Iowan is right to be wary. Medicare-for-all would destroy Medicare as we know it -- and make it harder for seniors to access care.

Harris's health care plan tries to be everything to everyone, from those agitating for a government takeover of the health insurance market to those who want to preserve a role for private coverage.

Her plan would move all Americans into a new, government-run health plan over 10 years. During that time, newborns and the uninsured would be automatically enrolled in Harris's "new and improved" version of Medicare-for-all. Every American would also have the opportunity to buy into the new plan.

The funding scheme for her plan is dubious. She'd raise taxes on the wealthy, employers, and investors. But she promises to exempt people who make less than $100,000 from any tax hikes. Instead, she'd impose new taxes on every stock, bond, and derivative trade.

During the 10-year transition period, private insurers would be allowed to operate Medicare plans as long as they followed the government's rules. Essentially, they could function like those that currently sell Medicare Advantage plans – but only for that 10-year window.

In Canada, my mother died of colon cancer after doctors delayed her colonoscopy in order to treat younger patients first.

They may simply decide it's not worth selling coverage when their business will be outlawed within a decade.

Regardless, once Harris's brand of “Medicare-for-all” becomes the only option, seniors will find themselves in a health care system worse than what they're used to.

Hospitals and doctors tolerate Medicare's low payment rates because they can cover their costs – and make a profit – by charging private insurers more. If the entire population is on Medicare's payment schedule, providers won't have anyone else to shift costs onto.

Without private insurance, hospitals will lose $151 billion in annual revenue. That will force them to cut services – or in the case of rural hospitals already running on thin margins, close entirely.

In a few years, seniors will go from having a privileged place in the health care system to fighting with everybody else for access to care.

By offloading all health care bills onto the government, single-payer systems create the prospect of unlimited demand. Add that to the comparatively limited supply of hospitals, doctors and other health care personnel and you get rationing as the result.

When governments ration care, they tend to start by curtailing the availability of procedures that seniors rely on.

Consider the United Kingdom, where "clinical commissioning groups" (CCGs) determine which procedures the government-run National Health Service will cover in a particular area.

In March 2019, the majority of CCGs wouldn't cover cataract removal, which they deemed "a procedure of limited clinical value." Many CCGs would only treat patients who had reached a certain level of vision loss. They've also reduced access to hip and knee replacements in an effort to cut costs.

Elderly Canadians aren't faring any better. In 2018, 30 percent of patients waited longer than six months for hip and knee replacements, as well as cataract surgery. Unsurprisingly, one in five Canadians 55 and older say they have major issues accessing health care.

These wait times leave seniors in more than physical pain. Consider the story of Jenny MacKenzie, a retiree in Vancouver who was told in 2019 she'd have to wait a full year for a hip replacement. "It really upsets me I can't cuddle my grandchildren or pick them up," MacKenzie told a Canadian think tank.

Waits like these can be deadly. From the government's perspective, it may make more sense to prioritize treatment for younger patients, who will live – and pay taxes – longer. Seniors often find themselves at the end of the line, no matter how sick they are.

I've experienced the effects of such rationing firsthand. In Canada, my mother died of colon cancer after doctors delayed her colonoscopy in order to treat younger patients first.

Given the havoc it would wreak on our health care system, it's no wonder Roberta Jewell objects to “Medicare-for-all.” She's not alone. The more voters learn about it, the more they oppose it.