The nearly two dozen Democrats now running for president of the United States in the 2020 election fall into three camps:

But for the Democratic Party to be successful in the 2020 election, the Democrats needs to move to, or as some would say, back to the middle.

LESLIE MARSHALL: BIDEN'S IN FOR 2020 -- HERE'S WHY HE'LL MAKE TRUMP A ONE-TERM PRESIDENT

If Democrats want a path back to power, they need to look at the success of their own party historically. In the 1990s Democrats moved to the center, they rejected the calls and ideas of the hard left. There were many then, and still some now, that feel these types of policies and ideas weaken the Democratic Party.

In 1995, President Bill Clinton supported welfare reform, a balanced budget, broadened health care and put 100,000 more police officers on the streets with his crime bill. Clinton won re-election and the Democrats were back in power. 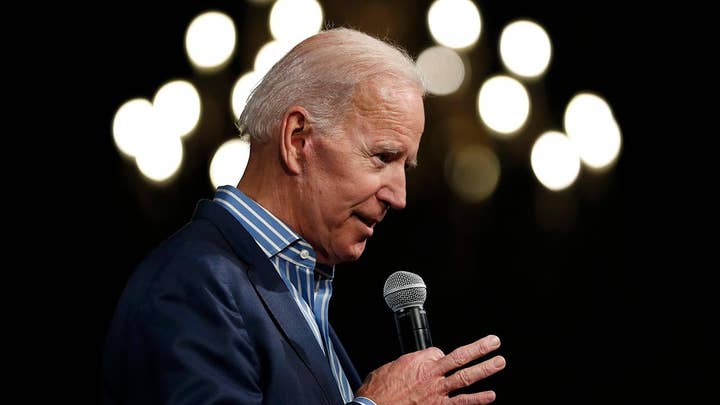 Democrats don’t have to look to the 90s for an example of success by moving to the middle. In the 2018 elections, when Democrats had a tsunami-like victory in the House gaining over 40 seats, they won in many districts with non-ideological candidates and in suburban districts with college-educated voters.

There are many on the left, and certainly, those outside the party who view the far-out leftists as too extreme. For Democrats, some fear they could lead the party off a cliff. Democratic leaders like House Speaker Nancy Pelosi, D-Calif., and Sen. Dick Durbin, D-Ill., have made it clear that they’re not fans of the Green New Deal. Pelosi and Durbin, as well as other Democrats, know that it’s not realistic to promise free college, to abolish ICE, etc.

The majority of Democrats are moderates and centrists. Earlier this year, Gallup put out a poll which asked: “If you had to choose, would you rather see the Democratic Party become more liberal or become more moderate?” Gallup’s poll found that 54 percent of Democrats would prefer that their party move toward the middle.

Another reason for Democrats to consider moving to the middle is the reality that this nation is very divided; most Americans don’t seem to want to tolerate extremism from either side; left or right.

And what about the Democrats' current front-runner for president? Joe Biden? Even his strategy team seems to believe that voters don’t want what the loudest voices on social media reflect, they feel the voters value pragmatism and experience; they feel it’s a good thing to be in the middle and to be able to not only reach across the aisle but work across the aisle.

As I write this, the song “The Middle” is running through my head. Maybe Biden should sing the chorus to the Democrats: “Baby, why don’t you just meet me in the middle?” Because Biden, taking a 32-point-lead over Sen. Bernie Sanders, I-Vt., shows that the middle is the best place for the Democrats to be.