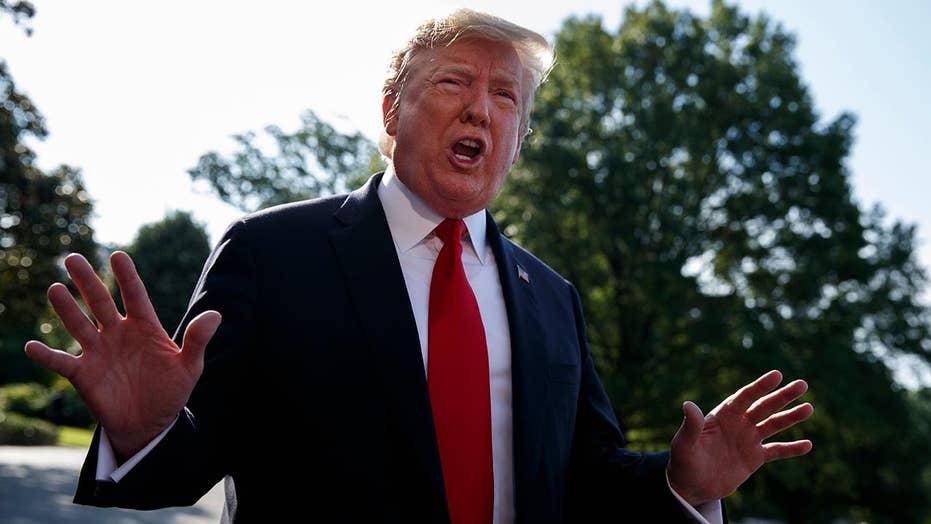 President Trump unloads on Robert Mueller and his team

President Trump and his defenders can successfully attack former Special Counsel Robert Mueller or congressional Democrats on impeachment – but not both. The independent voters who will decide the 2020 election don’t have time for multiple sets of arguments.

Moreover, independent voters have limited interest in all things political. So the president and his advocates should keep it simple and focus on Congress, not Mueller, who resigned Wednesday.

Mueller didn’t say anything when he spoke to journalists Wednesday that hadn’t already appeared in his report. That was the point of his news conference.

Mueller was directing his statement at Democrats who want him to testify before the House Judiciary Committee. His message was clear: If you compel me to appear, I won’t say anything you couldn’t read in my report. It speaks for itself.

After a redacted version of the Mueller report was released in April, President Trump’s approval numbers stabilized and polls began showing a growing number of Americans oppose any further action on impeachment of the president.

Indeed, the May 1 Harvard CAPS Harris survey found 65 percent of the public disagreed with the statement that “Democrats in Congress should initiate impeachment proceedings against President Trump.”

The same poll found that 60 percent of the public agreed with the decision by Attorney General William Barr and Deputy Attorney General Rod Rosenstein that “the facts and public actions of President Trump did not amount to obstruction of justice, especially since there was no underlying collusion

A vote on impeaching the president could increase the antagonism between the Democratic Party’s pro-impeachment faction and Democrats who view impeachment as a losing issue.

As a result, the president’s actions did not have “corrupt intent,” which is a requirement for an obstruction of justice charge. Trump was upset at being investigated when he knew he was innocent of accusations that he worked with the Russians to get to the Oval Office.

If Democrats want to argue that corrupt intent and an underlying offense are not needed to prove obstruction, then was former President Bill Clinton committing obstruction when he met with Attorney General Loretta Lynch at the Phoenix Airport while the FBI was investigating his wife’s mishandling of government emails?

Or was former President Barack Obama committing obstruction when he opined that Hillary Clinton had done nothing wrong with her emails while she was his secretary of state?

Both Presidents Obama and Clinton acted before then-FBI Director James Comey announced his recommendation that Hillary Clinton – then running for president against Trump – should not be charged for improperly using a private email server instead of the required secure government email system while heading the State Department.

Knowing what they know today, if House Democrats move forward on the impeachment of President Trump, five things will happen.

First, swing voters will conclude the Democrats are conducting a highly partisan exercise.

Second, impeachment talk will largely or completely obscure anything else House Democrats will do legislatively. Voters could decide the Democrats are a do-nothing bunch.

Fourth, the Republican Senate will quickly dismiss any impeachment resolution passed by the House, killing the issue.

And finally, any of the dozens of vulnerable House Democrats in Republican-leaning districts who back impeachment will have given their GOP opponents a big issue.

Though neither is guaranteed, two other things might happen if House Democrats move to impeach Trump.  A vote on impeaching the president could increase the antagonism between the Democratic Party’s pro-impeachment faction and Democrats who view impeachment as a losing issue.

And rather than inflaming Democrats, the GOP Senate’s virtually certain decision to kill any impeachment resolution could cause a significant number of discouraged Democrats to stay home on Election Day. Democrats strongly opposed to Trump might feel their party did not fight early, hard or effectively enough to impeach the president.

So the president and his defenders should stop paying attention to Mueller and his Wednesday news conference.

Unintentionally (because he’s a law enforcement professional and not political), Mueller’s actions again disappointed the Democratic firebrands who want Trump impeached. In the same way, the Mueller report failed to live up to the expectations of the Democratic Party’s Dump Trump wing.

But imagine how Americans might react to the Democratic argument that the president should be removed from office because he obstructed justice when there was no underlying offense to hide, and no corrupt intent behind his demands regarding the Mueller investigation that were issued out of frustration and never carried out.

Swing voters want the federal government to work. They want Congress and the president to focus on the big challenges America faces, not to spend all their energy in hyper-partisan activity.

House Speaker Nancy Pelosi, D-Calif., doesn’t want to put her majority at risk by plunging into impeachment. And the two current frontrunners in the Democratic presidential contest – Biden and Sanders – have refused to join the lesser lights in the primary in demanding Trump’s impeachment.

The speaker may not want the great common sense of ordinary Americans brought down upon her party, which could end her speakership and once again put Republicans in control of the House.