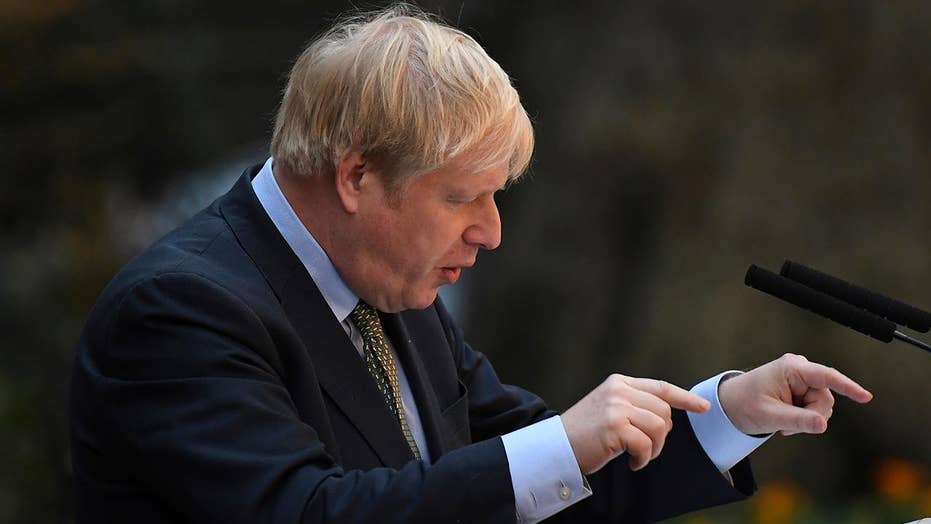 If I may paraphrase Karl Marx: A specter is haunting the Democratic Party – the specter of socialism. Democrats have every right to be terrified of this specter – because if they nominate socialist Sens. Bernie Sanders of Vermont or Elizabeth Warren of Massachusetts as their presidential candidate, they could suffer a crushing defeat, just as Britain’s Labour Party did last week.

There are, of course, big differences between politics and government in the United Kingdom and the United States. But Johnson has often been compared to President Trump, while Sanders and Warren are similar to Corbyn in many ways.

PEGGY GRANDE: DEMOCRATS BEWARE – BRITISH ELECTION IS FINAL NAIL IN THE COFFIN OF THE GLOBALIST EXPERIMENT

Like Trump, Johnson doesn’t fit the traditional mold of the leader of his nation. Both men are blunt, have ignored protocol, and sometimes seem likes bulls in a China shop. They have plenty of supporters – but plenty of critics as well.

As for Sanders, to his credit, he’s honest enough to admit he’s a socialist – joining Corbyn on the far, far left fringe of the political spectrum. Warren, who tried for years to falsely pass herself off as Native American, now tries to falsely pretend she’s a capitalist. But an examination of her positions shows she’s just as much as socialist as Comrade Bernie.

Britain’s general election was viewed by many on the left as a potentially revolutionary moment for socialism. It appeared for months that the Labour Party was poised to seize power in Parliament and install Corbyn as prime minister.

Even more importantly for many British and American socialists, after years of promoting relatively moderate policy platforms – well, “moderate” by European standards – the Labour Party had taken a sharp left turn under the leadership of Corbyn.

In the run-up to Thursday’s election, Corbyn and the Labour Party promoted their agenda as the “most radical … in modern times.” They obviously thought this would attract voters. Instead, the radical agenda seems to have driven voters away in droves.

Karl Marx famously authored “The Communist Manifesto” in 1848, published in London. This year the Labour Party had its own manifesto that would have made Marx proud.

Labour's manifesto promised a Green Industrial Revolution that would eliminate most fossil fuel use by 2030 to fight the “climate emergency.” That would cause massive energy price increases and likely energy shortages – and apparently enough voters figured that out to reject the party.

Labour candidates also campaigned on a proposal to force large companies to hand over 10 percent of their ownership to workers and planned to create a pilot universal basic income program.

Trump’s victory in 2016 was made possible in large part because of Democrats’ move to the left and rejection of values that had for decades won them support from working-class communities in the American Midwest.  Instead of learning from their 2016 loss, most of the Democrats competing for their party’s 2020 presidential nomination have moved even further toward socialism and globalism.

Oh, and one other thing: Labour promised to raise taxes to pay for all this “free stuff.”

Sound familiar? Many of these same policies have been peddled not just by Sanders and Warren but by a lot of the other Democrats competing to run against President Trump in November.

The success for the Conservative Party Thursday was due in large part to the gains it made in areas of the United Kingdom that have traditionally been much more favorable for the Labour Party, especially working-class communities.

This conservative success is remarkably similar to Trump’s surprising 2016 victories in states Hillary Clinton was favored to win – including Michigan and Wisconsin.

Some on the left, including Corbyn himself, have attempted to write off Labour’s embarrassing showing as one due entirely to the party’s attempts to block Brexit – the British exit from the European Union that was approved in a national referendum in 2016.

But the socialist principle of collectivism is the foundation of the Brexit debate. This principle says that all people in society must share their wealth and property and make economic decisions as a group, rather than as free individuals.

Britain’s involvement in the European Union brought the issue of collectivism to the forefront of many of the most important public policy debates in the United Kingdom over the past decade.

For example, should the British people be forced to live according to the collective desires of the whole of Europe, or should they be free to chart their own course?

Must Brits redistribute their wealth to nations like Greece, or should they be free to manage their own economy and property?

When British voters chose to reject collectivism and endorse Brexit, the Corbyn-led Labour Party chose to double down on socialism rather than move back to the political center. That turned out to be a very big mistake.

The decision by working-class British voters in 2016 to reject the globalist, socialist policies of the European Union foreshadowed Trump’s election as our president.

Trump’s victory was made possible in large part because of Democrats’ move to the left and rejection of values that had for decades won them support from working-class communities in the American Midwest.

Instead of learning from their 2016 loss, most of the Democrats competing for their party’s 2020 presidential nomination have moved even further toward socialism and globalism. They have adopted radical economic policies like the Green New Deal and reckless immigration policies that would throw open our borders and call for massive tax and spending increases to fund free college and all sorts of other government giveaways.

Apparently, many Democrats have forgotten that in 1972 far-left Democratic presidential candidate Sen. George McGovern of South Dakota carried only Massachusetts and the District of Columbia when he ran for president against President Richard Nixon, who won the other 49 states. And McGovern wasn’t as far left as Sanders and Warren.

The Democrats elected to the White House since McGovern’s loss – Presidents Jimmy Carter, Bill Clinton and Barack Obama – would never be described as conservatives, but they were to the right of McGovern and most of the Democratic presidential candidates today.

Outside of Democrats’ far-left, mostly urban strongholds, Americans have consistently rejected socialism. A November Heartland Institute/Rasmussen Reports survey found just 12 percent of all likely voters said they think socialism is better than a free-market economic system. Only 26 percent said they would vote for a presidential candidate who identifies as a socialist.

That’s why on Friday Democratic presidential candidate and billionaire capitalist Michael Bloomberg referred to the British election results as a potential “canary in the coal mine” and a “catastrophic warning” for Democrats. I disagree with Bloomberg on most things, but I’m in complete agreement with him on this point.

Most Democratic politicians seem completely unwilling to advance policies that the majority of Americans want. Instead, they appear focused on impeaching Trump – even though he’s done nothing to warrant his removal from office.

If Democrats keep this up – and they almost certainly will – it’s looking increasingly likely that Trump will win another four years in the White House and Republicans could capture control of the House and keep control of the Senate in 2020.

The further to the left the Democratic presidential candidates move, the more voters get left behind. That’s why the Democratic embrace of socialism is very good news for President Trump.

Justin Haskins is the executive editor and a research fellow at The Heartland Institute and the editor-in-chief of StoppingSocialism.com. He's the author of "Socialism Is Evil: The Moral Case Against Marx's Radical Dream." Follow him on Twitter @JustinTHaskins.
ADVERTISEMENT