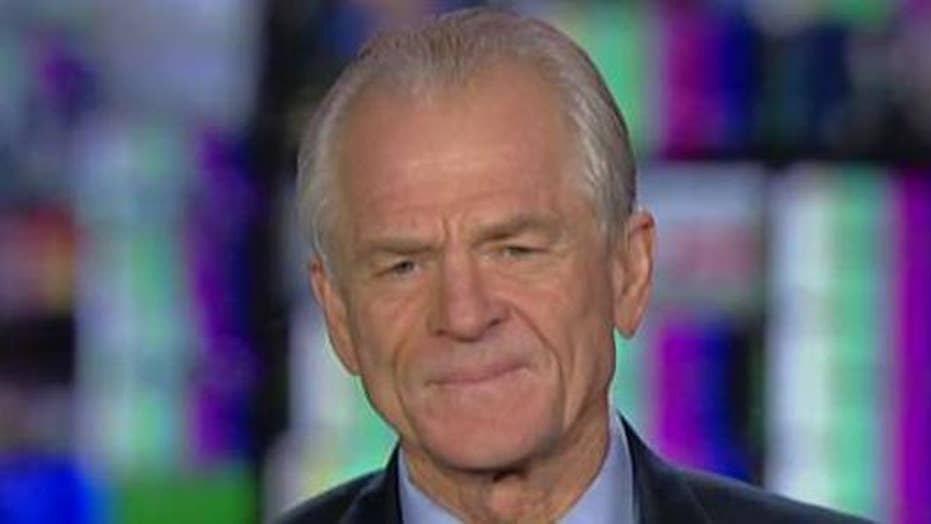 Trump administration reaches phase one trade deal with China, some tariffs to remain in place

Two strong trade deals, plus one strong deal on defense and parental leave, plus two weak impeachment articles, plus one inspector general’s report vindicating no one equals a very good week for the American people and President Trump.

USMCA will also break down Canadian and Mexican agricultural barriers – a boon for American dairy, poultry and wheat farmers. It should pass both chambers of Congress by comfortable margins.

After a similarly long gestation period, the United States and China completed a "phase one" trade agreement. It represents an important milestone along President Trump’s long march towards ending China’s economic aggression against American workers and manufacturers.

The centerpiece of the deal is a strong and effective enforcement mechanism. The United States can impose proportionate penalties without fear of retaliation if China violates the deal’s provisions on intellectual property theft, forced technology transfer, or currency manipulation.

In another boon for American farmers, China has also committed to a dramatic increase in purchases of pork, soybeans and other agricultural products. To ensure China negotiates in good faith on Phase Two of the deal, tariffs remain in place on over $350 billion of Chinese imports.

With respect to defense, the president will soon sign the National Defense Authorization Act (NDAA) of 2020, which, among other things, establishes the United States Space Force, ensuring American dominance in space. The NDAA will also create paid parental leave for federal workers, which will greatly benefit their children. Finally, it will give our troops a much-needed 3.1 percent pay raise.

On the impeachment front, the Democratic-controlled House, at war with itself, jettisoned its fruitless efforts to slap any specific crime on President Trump based on any actual law. No explicit high crime. No bribery. No misdemeanor.

Instead, the House settled on the two weakest articles of impeachment ever brought against a sitting president. “Obstruction of Congress” is laughable in the face of the executive branch’s right to executive privilege.

As for “abuse of power,” this charge is as vague as a June day is long. As one wag put it, “a turkey big enough to stuff any phony allegation you want into it.”

To be clear, President Trump is simply doing what the American people hired him to do – in the case of Ukraine, ensuring that American tax dollars are being used properly and free of foreign corruption to advance our national security.

Finally, the Justice Department inspector general’s long-awaited report revealed a deep-seated conspiracy within the FBI and elements of the intelligence community to overthrow a sitting president. This conspiracy began with the Hillary Clinton campaign paying for a fake dossier compiled by an avowed Never Trumper and former British spy Christopher Steele.

Rogue elements within the FBI and intelligence community then engaged in at least 17 separate instances of omitting or altering data to use the phony Steele dossier to obtain a Foreign Intelligence Surveillance Act (FISA) warrant to spy on the Trump campaign.

This egregious behavior by a few bad apples in the FBI bunch triggered a more than two-year witch hunt that finally ended in a report by Special Counsel Robert Mueller that found no collusion with Russia by President Trump, his campaign, or his administration.

At this point, every American concerned about economic growth and prosperity should be cheered by President Trump’s great achievement with the USMCA and China deal. Every American should be equally appalled by a hyper-partisan impeachment process that is right out of a William Faulkner novel – “all sound and fury signifying nothing.”

Over the next several weeks, Americans have many reasons to celebrate the holiday season. And as we enter this new decade, we should look forward to the continuation of a strong economy and bullish market under President Trump’s leadership.