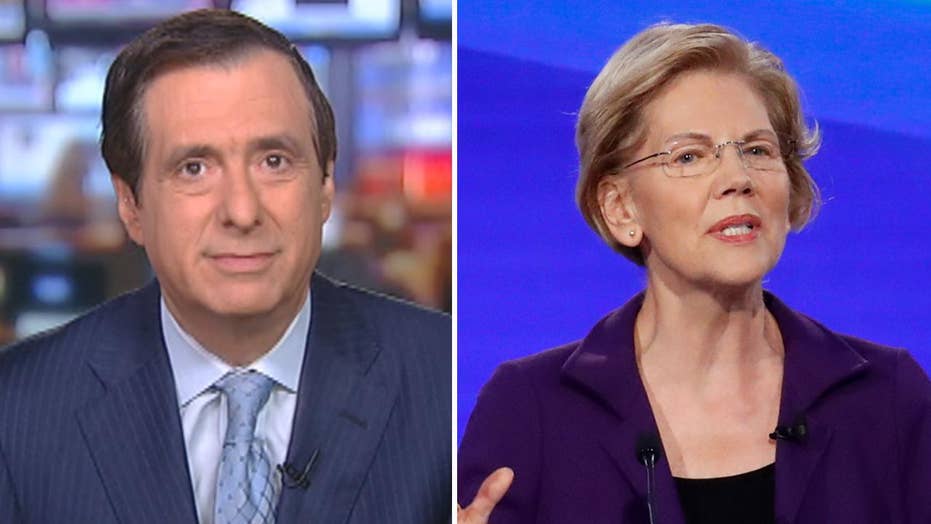 'MediaBuzz' host Howard Kurtz weighs in on Elizabeth Warren's democratic rivals turning on her during the recent debate, thus adding some new scrutiny to her campaign.

That’s a claim that would add a few feet to Pinocchio’s nose.

Warren can call herself anything she wants. She falsely called herself a Native American for years and finally had to apologize for that instance of mislabeling. But if truth in packaging laws applied to politicians, Warren would have to admit she’s no more a capitalist than she is a Native American.

With her long record of promoting socialist causes and her calls for massive new job-killing government regulations and huge tax increases – on income, wealth, and whatever she can think of to take money from hard-working individuals and businesses – Warren is as much of a socialist as Sanders.

While their views aren’t are identical, the true ideological colors of Comrade Bernie and Comrade Elizabeth are both shades of red.

In the wake of Sanders’ recent heart attack, Warren appears better positioned than ever to become the Democratic Party’s 2020 presidential nominee.

Real Clear Politics’ average of recent presidential surveys shows Warren is now polling eight percentage points higher than Sanders. And in two national surveys – one by The Economist and another by Quinnipiac – Warren is polling higher than the longstanding front-runner, former Vice President Joe Biden.

Although Biden has been considered a lock to win the nomination by some analysts for months, it seems unlikely he will be able to compete with a far-left challenger like Warren or Sanders once the race inevitably narrows.

Although Biden is unquestionably a progressive whose policies would cause substantial damage to the U.S., he’s not a radical who wants to dynamite the capitalist system that has made America the most prosperous and powerful nation on the planet. But that’s exactly what Warren and Sanders want to do.

It doesn’t help that Biden’s TV debate performances have made the former vice president look more than a little confused. At times, it appears Biden isn’t sure where he is or what year it is – never mind what the candidates are debating.

Warren is a different story entirely. Her debate performances have been sharp and, at times, impressive – though she sometimes sounds like a nagging schoolteacher berating her young students.

Why, exactly, hasn’t Warren been labeled a “socialist”? The biggest – and perhaps the only – reason is that she and others in her party and the left-leaning media continue to insist she isn’t one, despite a mountain of evidence to the contrary.

For example, in an Oct. 13 interview with ABC News’s “This Week,” Sanders said: “There are differences between Elizabeth and myself. Elizabeth I think, as you know, has said that she is a capitalist through her bones. I’m not.”

Like many of the things oozing from Comrade Bernie’s mouth, this, too, is false. Warren is a socialist through and through and her dangerous, destructive policy plans would – like all socialist proposals – cause substantial harm to America’s economy and society, hurting everyone, including the most impoverished.

Warren understands that if she says she’s a socialist, she’ll lose support from moderate voters whose support she would need in the general election to defeat President Trump. So she pretends she’s not what she really is.

Here are just some of Warren’s many frightening socialist plans for the United States:

Warren has endorsed the “Just Society” proposal of socialist Rep. Alexandria Ocasio-Cortez, D-N.Y. This radical idea would – among other things – redefine poverty in the United States so that potentially tens of millions of additional Americans will be pushed onto social welfare programs like Medicaid. A “Just Society” would also make it illegal to deny illegal immigrants and those who have been convicted of crimes access to welfare programs.

Warren has proposed what she calls The Accountable Capitalism Act. This would force every corporation in America with $1 billion or more in annual revenue to obtain a federal charter from a new regulatory agency. The legislation would require that at least 40 percent of corporate board member be elected by workers, and impose costly new bureaucratic regulations on companies. This would likely cause a mass exodus of the most important businesses from the U.S. – stunting economic growth, sending unemployment skyrocketing, and increasing the national debt

Warren has also proposed imposing a single-payer health care system. This would outlaw most forms of private health insurance and force the more than 140 million Americans now enrolled in private insurance plans onto government-managed health plans – all at a cost of $32 trillion over 10 years. Single-payer models elsewhere in the world require very high taxes and have led to rationing of health care and long wait times. This rationing increases unnecessary pain and suffering for millions of people and in the most extreme cases can lead to some patient deaths.

Warren also wants to spend $500 billion over 10 years to build millions of new housing units, and trillions of dollars to cancel college student loan debt for 42 million Americans. She would also “give every American the opportunity to attend a two-year or four-year public college without paying a dime in tuition or fees.”

Warren, like Sanders, was one of the original cosponsors of Ocasio-Cortez’s Green New Deal. This is the most radical, dangerous, environmentally destructive proposal in modern American history. The Green New Deal would destroy millions of jobs by eliminating most forms of fossil fuel generation and use, including that gasoline-powered vehicle you drive to work every day. It would also create a new system of publicly-owned banks, basic income programs, a federal jobs guarantee, massive new green housing mandates, a universal health food program, and countless new “social justice” programs.

These proposals – and the incredibly high tax increases needed to fund them – would push the U.S. closer than ever to full-blown Marxism, and they are without any doubt in line with socialist principles. This is why self-described socialists like Sanders and Ocasio-Cortez have embraced or even proposed the vast majority of them.

With Halloween just around the corner, millions of children will be dressing up for one night pretending to be all sorts of characters. Warren has stopped pretending to be a Native American, but pretends every day to be a capitalist – while she knows very well that she’s a socialist through and through.

For the sake of our country and the American people, let’s hope voters see through Warren’s masquerade.