Elizabeth Warren refuses to answer how health care plan will be paid for.

From the beginning, the 2020 Democratic race has been a different kind of contest. The candidates don't seem to be competing to see who can run the country most efficiently. That's the old style of politics.

Instead, these candidates are pledging to remake America entirely. Rip out the old, which is. they're telling us, irredeemably tainted by racism, sexism and free enterprise, and replace it with something completely new and different.

At the heart of this effort is the promise of "Medicare-for-all." Now, you may have heard the phrase. Two of the most popular Democratic candidates, Bernie Sanders and Elizabeth Warren, both have endorsed it. But what exactly does it mean? What exactly is "Medicare-for-all"?

It's worth finding out. It's not a tweak to some regulation. It's not even ObamaCare, which once upon a time Democrats defended and Republicans denounced as socialism.

"Medicare-for-all" is actual socialism, for-real socialism. Health care spending amounts to about a fifth of the entire American economy. Elizabeth Warren demands total control of all of it -- immediately. That's "Medicare-for-all." If it becomes law, it would amount to the largest expansion of the federal government since the second World War -- by far.

So it's worth asking how exactly all of this would work and critically, who would pay for it. Elizabeth Warren has been asked that question many times, and every time, she has refused to answer.

Marc Lacey, national editor for The New York Times: Will you raise taxes on the middle class to pay for it? Yes or no?

Stephen Colbert, host of "The Late Show": But will their taxes go up?

Colbert: But here's the thing, I've listened to these answers a few times before --

Warren: It's how much are your costs going to go down ...

Chris Matthews, host of "Hardball": No, no. Different question. How much of your taxes go up?

Matthews: How is it a different question?

Warren: It is how much families end up spending.

Warren: It's a question about where people are going to come out economically.

Matthews: That's not my question.

She will not answer. She won't explain, no matter how hard she has been pressed. And as you just saw, even some fairly strident Democratic partisans have pressed her.

Warren refuses. She will not explain what it would cost or who would pay for it.

Details, like what things cost or whether something is constitutional, or even if the majority of Americans want it, none of that seems to interest Elizabeth Warren anymore.

Well, now we have a credible estimate. According to a study by the Urban Institute, in just the first 10 years, Elizabeth Warren's "Medicare-for-all" plan would cost an additional $34 trillion.

That sounds like a lot. How much is it? Here's some perspective.

That's before we spend a single dollar on -- I don't know -- Social Security, education, national defense and everything else.

Now, you should know that the Urban Institute has no motive to attack Elizabeth Warren. It's not a right-wing think tank. It's a left-wing think tank. They likely didn't even account for the cost of one's pledge to give free health care to every illegal alien who sneaks into the country. 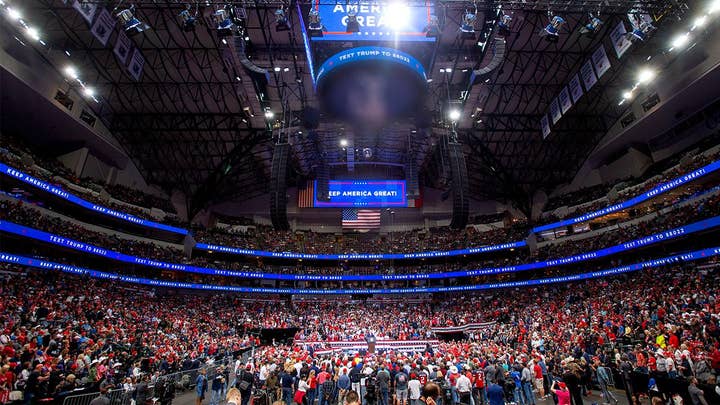 So who is going to pay for all of this? Well, think of it this way: $3.4 trillion a year -- that's the estimated cost. Divide that by 320 million Americans, and you get more than $10,000 per person -- not per taxpayer, per person.  That means every child, every retiree, every prison inmate, everybody.

That would be the largest tax assessed in American history by far. Nothing even comes close. That would change everything. An awful lot of people would just leave the country and not come back.

So how do you pay for "Medicare-for-all"? It's not a minor detail we can settle later. It's the single most important question about the program. Why do you think we don't have it already? Because we can't afford it.

Elizabeth Warren pretends that's irrelevant -- and to her, maybe it is irrelevant.

At some point in the last couple of years, Warren stopped functioning as a conventional senator and became a kind of Messianic figure. Details, like what things cost or whether something is constitutional or even if the majority of Americans want it, none of that seems to interest Elizabeth Warren any more.

Warren has seen the future, and in that future, she has complete and unquestioned control of America. She is the most powerful person in the world.

You can almost hear her repeating the phrase to herself... "The most powerful person in the world."