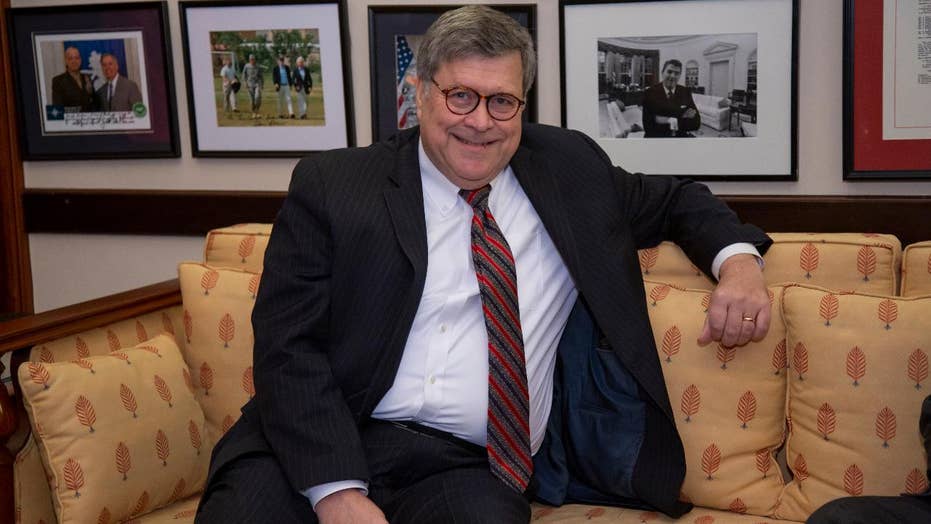 Former Attorney General Alberto Gonzales says there will be lots of questions about William Barr’s views on the Mueller investigation.

What would William Barr do if he is confirmed as attorney general and confronted with a repetition of the 1973 Saturday Night Massacre, when Richard Nixon tried to save his presidency by ordering his attorney general to fire the special prosecutor investigating him? Would he be willing to shut down special counsel Robert Mueller’s investigation?

After meeting with him earlier this week, Senator Lindsey Graham said that Barr had assured him that he would let Mueller complete his inquiry into Russia’s election-meddling. That view was widely echoed by those who know Barr well. “The man I know would never be swayed by undue political pressure—from editorial boards, the Congress, or a president,” said Paul Cappuccio, a former executive vice president and general counsel of Time Warner. “He’ll be his own man,” said Michael Kelly, who worked with Barr when he came to GTE as general counsel and executive vice president. “Anyone who knows my father knows he’s the wrong man to try to bully,” said Margaret “Meg” Barr, at 34 the youngest of his three daughters, all lawyers with public-service jobs.

Barr was well regarded during his first stint as attorney general under President George H. W. Bush between 1991 and 1993, but critics argue that his overly expansive view of executive power and defense of Trump in a 19-page unsolicited memo to the Justice Department and to Trump’s lawyers raise questions about his fitness for the job. Many insist that Barr should recuse himself from overseeing the Mueller inquiry as a condition of confirmation, though Deputy Attorney General Rod Rosenstein has said that the memo had “no impact” on the Mueller probe.

In our interviews last month in Washington, Barr refused to discuss either his confirmation hearings, which begin on January 15, or his only meeting with Trump, in December, which one White House official described as a “candid” 90-minute encounter, though Trump reportedly did not ask how Barr would handle the Mueller inquiry. During a wide-ranging interview and at a dinner with his family, Barr did discuss his personal and professional life. He and Christine, a retired librarian, have been married 45 years. His eldest daughter, Mary, 41, is a senior Justice Department official who now oversees the department’s anti-opioid and addiction efforts in Rosenstein’s office; Patricia, 37, is counsel for the House Agriculture Committee; and Meg, a former Washington prosecutor and cancer survivor, is now counsel for Republican Senator Mike Braun of Indiana.

Barr, 68, clearly wants the attorney general job. “Our institutions matter,” he said, without elaboration. He does not seem to fear his confirmation turning into an ugly, partisan brawl that could sully his reputation. Meg’s cancer battle took care of that. “If it’s not about my daughter’s being mortally ill, it’s nothing,” he said softly in the living room of the new house in McLean, Virginia, that he helped design. “Meg’s illness changed our family. It changed me.”

The second of four sons, William Pelham Barr grew up on New York’s Upper West Side. His father became headmaster at Dalton, the elite New York prep school, where his college-educated mother taught English to foreign students. Barr’s values were ingrained early in life—conservative politics and Catholicism—and have never wavered. At Corpus Christi, his Roman Catholic elementary school, he supported Richard Nixon. (A nun took him aside and promised to pray for him.) Even in high school at Horace Mann, the most competitive nonsectarian (but largely Jewish) prep school in New York, Barr stood out. “He wanted to be respected as a conservative intellectual more than liked,” recalled Doug Schoen, the Democratic pollster and a fellow student there. “He made it known that he took his intellectual inspiration not from Allard Lowenstein, the Pied Piper of the anti-war movement, but William Buckley.” This predilection for early decisions applied to avocations as well. At age eight, Barr took up the bagpipes, and has since played competitively in Scotland and at family events.

Barr told his high school guidance counselor that he wanted to lead the Central Intelligence Agency, said Robert Kimmitt, a Republican friend of 40 years who has also held several senior government posts. While most aspiring analysts studied Russian during the Cold War, Barr got a master’s degree at Columbia in Chinese—“the other enemy,” as he put it. Between 1973 and 1977, he worked as a CIA analyst while attending night law school at George Washington. As a junior specialist in China, he occasionally was asked to backstop CIA director, George H.W. Bush, a former U.S. ambassador to China, at congressional hearings. The connection proved useful.

Barr’s faith and commitment to service have taken priority, his family told me, whether he was working in government or in the private sector as executive vice president and general counsel of Verizon. He has long served on the board of the Archdiocese’s Inner-City Scholarship Fund in New York, raising money for Catholic schools and causes. Friends told me that for many years he has paid the tuition of some 18 students a year at a parochial school in New York, costing him about $50,000 a year.

Perhaps the pivotal day in the Barr’s life was July 17, 2012, when he and Meg learned that her Hodgkin’s lymphoma had relapsed. Though 92 percent of Hodgkin’s cases are cured, only 17 percent of patients whose cancer returns survive. “It was the worst day of my life,” Meg told me. They reacted with resolve, not panic, reading studies, questioning researchers, and examining the results of experimental treatments. “We were like two lawyers preparing a legal brief,” she recalled.

They also prayed. Barr asked the nuns at convents he helps support in Illinois and Virginia to pray for his daughter. He also sought help from a rabbi who sent Meg a book of prayers. His own father, though a Catholic convert, was born a Jew. “So I wanted to cover all the bases,” he said.

When they chose Dana Farber Cancer Institute for Meg’s chemo and stem-cell transplant, Barr suspended work at his law firm, Kirkland & Ellis, and moved with his wife to Boston to be close to her. “He never missed a chemo or radiation treatment, a test or a scan,” she said, calling him her “cancer concierge.” When Meg needed to be isolated after her stem-cell transplant, Barr rented a house in Scituate, outside Boston, where they walked on the beach and read books together. They talked about a future neither was certain she would have. “Those three months were best and worst of times,” she recalled.

Against the odds, Meg recovered.  “The hardest part of my illness was accepting the randomness of it, the fact that you can’t control the outcome,” she said. “Both my father and I tend to be control freaks.”

Last December, days after President Trump announced his intention to nominate Barr as attorney general, he walked Meg down the aisle of St. Peter’s, their local parish church. He even persuaded the priests to let bagpipes play at the wedding ceremony.

In 1991, after only two days before the Senate Judiciary Committee, Barr’s nomination as attorney general was approved unanimously, by voice vote. He won praise for his candor from Judiciary Committee chairman Joe Biden for admitting that he believed the Constitution had not created a right to abortion, and that abortion, though now settled law since Roe v. Wade, should be a “legitimate issue for state legislators.”

His second confirmation hearing will surely prove more contentious, especially given Barr’s longstanding endorsement of broad presidential powers. When Barr headed the Justice Department’s Office of Legal Counsel in 1989, he deemed legal the invasion of Panama and the arrest of longtime U.S. ally Manuel Noriega and argued that the Bush administration could arrest terrorists and drug traffickers overseas, even in violation of international law. As deputy attorney general in 1990, he advised that President Bush could legally wage war against Iraq, without Congress’s approval, though he encouraged Bush to seek a congressional resolution of support to strengthen his political position. Barr is therefore likely to support the issuing of presidential pardons to loyalists. Long a champion of tough-on-crime policies and of tighter immigration controls, he is also likely to embrace former attorney general Jeff Sessions’s agenda on both, perhaps even including the legality of separating parents from children at the U.S. southern border.

But it is the Mueller investigation that will draw the sharpest inquiry. Barr’s memo argues that a president cannot be accused of obstructing justice unless he destroys evidence, urges a witness to lie, or deliberately takes other actions “to block or hinder an investigation.” He has criticized Mueller for appointing so many Democratic investigators for his probe. In a 2017 Washington Post op-ed, he argued that Trump “made the right call” by firing James Comey as head of the FBI, and last year he told the New York Times that there was more justification to investigate Hillary Clinton’s role in the sale of uranium to Russia than Trump’s supposed collusion with Russia. Senator Dianne Feinstein has called such views “troubling.” Senate Minority Leader Chuck Schumer has vowed to use the confirmation hearings to force Barr to pledge that Mueller’s inquiry will proceed unimpeded, and that Congress and the public will see the final Mueller report.

In his highly qualified, unenthusiastic endorsement of Barr, Benjamin Wittes, editor-in-chief of Lawfare and a senior fellow at the Brookings Institution, called the nominee “as good as we’re likely to get,” arguing that “all the features that make Barr attractive also make him scary.” But Wittes is also encouraged by reports that Barr and Mueller have known and respected one another for years. Senator Graham, one of Trump’s most ardent champions, also stressed Barr’s respect for Mueller, who was assistant attorney general for the Justice Department’s criminal division under Barr.

“Trump may believe that Barr will do his bidding, but that’s wrong,” said Schoen. “Notwithstanding his memo, what Barr’s history tells you is that he won’t bend or fold for Trump. His personal and professional record suggest that he will do what he considers legally right and ethical.”

In a recent episode of The Lawfare Podcast, former U.S. Attorney Preet Bharara argued that Barr’s decisions as attorney general, if he is confirmed, will either burnish or tarnish what is now a sterling reputation. Barr, in sum, has little to gain, but much to lose. That may well be his best qualification for the job.

Editor's note: This column first appeared in City Journal, a publication of the Manhattan Institute.