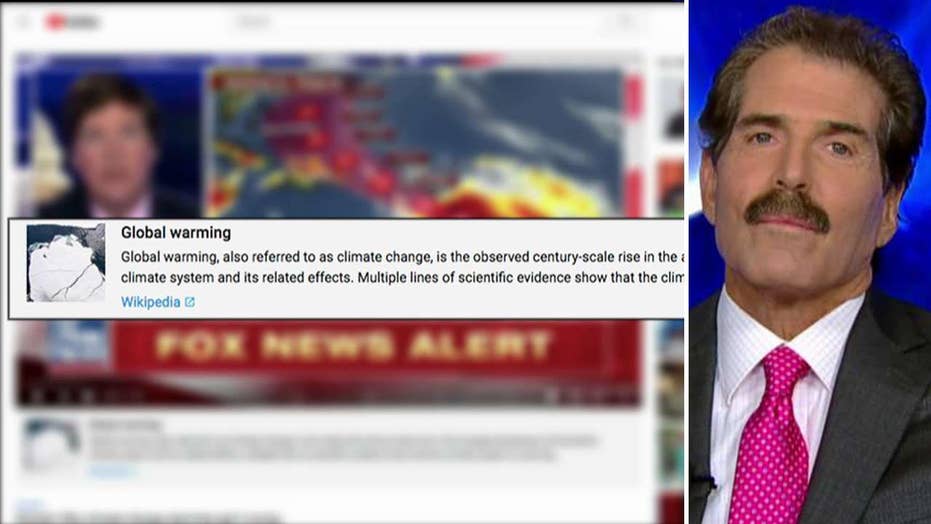 On Youtube, Facebook, Twitter, and elsewhere, conservative and libertarian voices are being silenced online, and not many conservatives in Washington are standing up to defend them. Bill Maher is a liberal, but one with principles, so he's been willing to stand up for free speech. Some of John Stossel's videos for Stossel TV have disclaimers on YouTube and he sounds off. #Tucker

Are those who question the severity of global warming worse than Nazis? I wouldn’t think so, but YouTube, owned by Google, seems to.

I wrote last week that YouTube added a Wikipedia link about global warming to videos like ones I do about climate change.

On CNN last week, Twitter CEO Jack Dorsey said, “I think we need to constantly show that we are not adding our own bias, which I fully admit is left, is more left-leaning.”

At least Dorsey admits that. Usually, powerful social media platforms push their political agendas while pretending not to have any.

Roy Spencer, author of “Climate Confusion,” points out that when he does a Google search for “climate skepticism,” the first 10 pages aren’t links to skepticism. Instead, they’re links to articles criticizing climate change skepticism.

By contrast, he points out, a search for “Nazi Party” yields mostly straightforward commentary about what Nazis believed.

Climate change skepticism is more in need of “correction” than Nazism?

(Spencer’s and my skepticism doesn’t mean we doubt global warming. The globe is warming. Climate changes! We just don’t think it’s been proven that humans are the main cause or that fossil fuel bans and the billions of dollars spent on things like solar subsidies will do any good.)

YouTube also continues its purge of political commentators it considers too far right. After taking down Alex Jones and his Infowars channel, YouTube expanded its ban to an old personal channel of Jones’ associates Owen Shroyer and Roger Stone.

Meanwhile, Facebook, now the world’s most powerful publisher, removes some political articles -- not just so-called fake news created by malicious foreign actors or robots, but also ones by professional journalists.

Salena Zito posted a New York Post column about Trump supporters sticking with Trump. Facebook removed it. It reappeared only after she complained on Twitter and “went through the confusing messaging options” on Facebook’s page to ask why her article was removed.

She never got an explanation. “No one told me why it was taken down,” she writes. “Perhaps someone doesn’t like my stories and complained… (W)ho is that person and why does Facebook give them that sort of power?”

Good luck trying to get social media platforms to explain why they ban you.

Maybe the “content moderators” at tech companies want to narrow your choices to information from the political center and left -- where most tech company workers live.

The tech giants gathered in secret last week to confer about how to “counter” political misinformation during the coming election season. They say they want to prevent disruption and interference by outside forces like the Russians. Good.

But I get nervous when I think about how broadly some liberals define “disruption.”

The purpose of the First Amendment is to let all of us say critical things about the politically powerful, even radical things.

I worry that tech companies, to avoid admitting they’re motivated by political bias, will do what many political activists have done: keep expanding the definition of “hate speech” until almost anyone can be accused of it.

A NASCAR driver just lost a sponsorship (although, of course, a sponsor has a right to decide whom to fund) because his father, during a radio interview, admitted to using a racial slur back in the 1980s, before the NASCAR driver was even born.

Now that Google can search everything you’ve said, YouTube may flag it as misinformation. Facebook can track what all your relatives and friends have said, too. Activists stand ready to get angry about all of it.

At this rate, future speech will be muted. Especially libertarian and conservative speech.