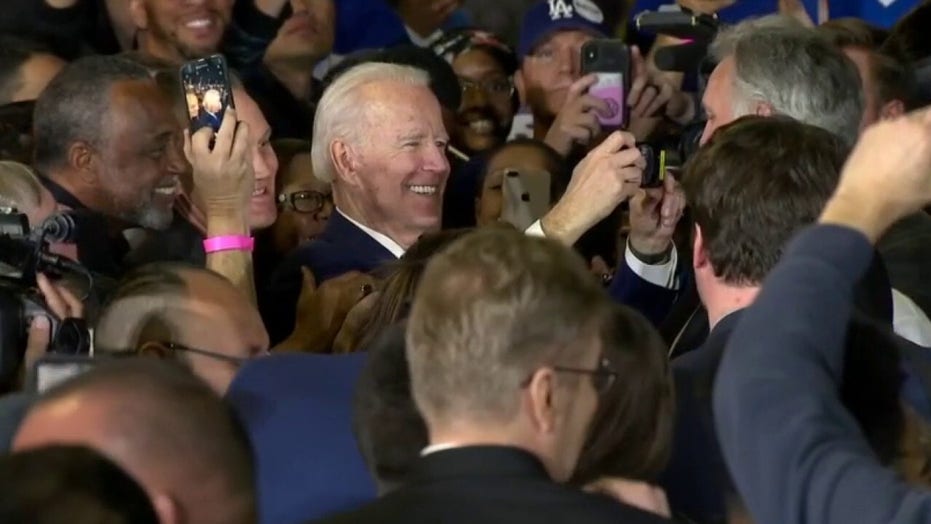 With the race for the Democratic presidential nomination now effectively down to a two-person contest between former Vice President Joe Biden and Sen. Bernie Sanders, I-Vt., one of Biden’s greatest assets will be the strong and well-deserved support he enjoys from African-American voters.

And if Biden becomes the Democrat nominated to run against President Trump in November, the former vice president’s popularity with the black community will continue to provide a vital boost to his candidacy.

﻿Back in August 2016, then-candidate Donald Trump stumped for black supporters – but in a speech to an overwhelmingly white crowd in Dimondale, Mich. This was doomed to be ineffective for a whole host of reasons, but it ended with a shockingly offensive question Trump addressed to African-Americans.

JUAN WILLIAMS ON DEM RACE: 'IT'S BIDEN'S NOMINATION TO LOSE' AFTER SUPER TUESDAY

Trump painted a gloomy picture of horrific suffering by black people and urged them to vote for him, asking: “What the hell do you have to lose?”

And black voters answered the question again in the Super Tuesday Democratic primary races, after living through three years of a Trump presidency.

Their reply? They have plenty to lose – if Trump wins four more years in the White House.

If there was any doubt that black voters are the backbone of the Democratic Party, voting in 14 Super Tuesday states should officially put it to rest.

In all the states that have held Democratic primaries or caucuses thus far, Biden has won the overwhelming support of African-Americans, according to exit polls. In Alabama, he got 72 percent support in a state that had the largest population of black voters on Super Tuesday. Biden won 66 percent of the black vote in Virginia, 62 percent in North Carolina and 58 percent in Texas.

This result shouldn’t have surprised as many people as it did. Perhaps they should’ve listened to actual African-American voters over the last 10 months.

Indeed, black voters and politicians had been shouting from the rooftops that until the South Carolina primary that was held last Saturday, we wouldn’t know anything about the trajectory of the race for the Democratic presidential nomination.

With ridiculously close nominating contests in overwhelmingly white Iowa and New Hampshire and one real win for Sanders in Nevada, we really didn’t have much information to go on, considering the diversity of the Democratic Party.

That landslide victory by Biden in South Carolina suddenly changed his image from that of a loser to a winner. And that catapulted Biden to big wins on Super Tuesday that once again made him the front-runner for the Democratic presidential nomination.

Voters who made their minds up in the last few days overwhelmingly went for Biden. This was true across Super Tuesday states – even in Sanders’ home state of Vermont.

The decisions by Sen. Amy Klobuchar of Minnesota and former South Bend, Ind., Mayor Pete Buttigieg’s to drop out of the presidential race and endorse Biden also boosted Biden on Super Tuesday and will do so in his continuing battle with Sanders. Klobuchar’s backing helped Biden win a surprise victory in the Minnesota primary.

The decision Wednesday by former New York City Mayor Mike Bloomberg to drop out of the presidential race should also help Biden with voters of all races. While not as popular with black voters as Biden, Bloomberg received some high-profile endorsements from African-Americans. Bloomberg supporters are now far more likely to support Biden than the far-left candidacy of Sanders.

But the biggest story of Super Tuesday was that African-American voters who did exactly what they said they would all along: vote for the guy they know and trust.

It’s no secret why Sanders went up with his first ad Wednesday featuring him with President Obama. This comes despite Sanders reportedly considering running against Obama for the Democratic presidential nomination in 2012, despite Sanders criticizing Obama for not getting enough done, and despite many Sanders supporters deriding Obama.

Sanders has been arguing for months that Biden’s campaign is the “establishment.” Since Klobuchar and Buttigieg endorsed Biden it’s only gotten worse. Any sensible person knows that black Americans aren’t the establishment; they are actually the group the establishment wants to vote the least.

After reports that many African-Americans had to stand in line for five hours or more to vote, the New York Times’ Nikole Hannah-Jones tweeted that “forcing people to wait in line for 7 hours to vote is essentially imposing a poll tax as it requires workers to take off the entire day to exercise their constitutional right. I’d be curious how many voters in wealthy, white areas had to wait this long.”

I think we all know the answer regarding how long wealthy whites waited to vote.

Further on the issue of blacks being the “establishment,” Sen. Tim Kaine, D-Va., said the claim “is not only untrue but it’s insulting. Don’t call minority voters who turn out and express their passion for Joe Biden and don’t just say that they’re the establishment -- nothing could be farther from the truth.”

Biden spokesperson Symone Sanders, who is black, said people who call black voters “the establishment” “are tone-deaf and have obviously learned nothing.”

Sadly, I believe the Sanders campaign has managed to learn nothing. Sanders argued Wednesday that he’s been hampered by the “venom” in the “corporate media” among those opposing his effort.

The truth is that Sanders has been hampered by his socialist ideology, his supporters and the fact that there is no path to the Democratic nomination without black voters. With their support, there are many routes – giving Biden options.

This isn’t to say the Democratic nomination race is over. Biden is closer to the nomination than he’s ever been, but things can change in a moment. Just think about where we were a week ago.

But Sanders, his enthusiastic backers and commentators better be careful about continuing to speak derisively about black voters who are certainly not the “establishment” and absolutely know what they’ve got to lose.