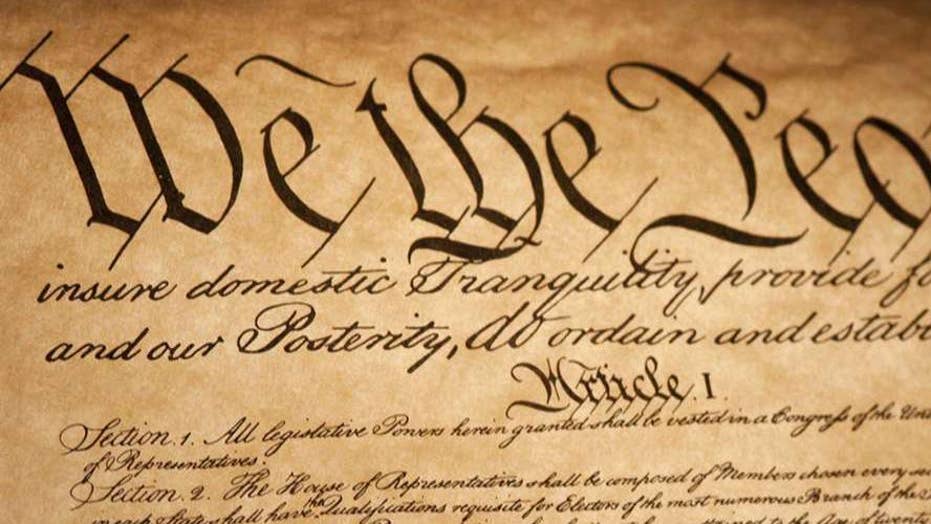 How would the Founding Fathers feel about America’s current political system?

Citizens for Self-Governance President Mark Meckler on the importance of the Constitution.

Forget about getting a backbone. America needs an iron constitution for the era of great power competition now upon us.

Dueck, a former "Never Trumper," starts and ends his book with an unexpected assertion that Founding Fathers George Washington, Thomas Jefferson and the rest of the cast of "Hamilton" would have been perfectly content with President Trump's foreign policies.

When America opened for business, Dueck argues, “conservative nationalism” was American foreign policy – a set of core beliefs held in common. Back then, they just called it nationalism.

Nationalism included a shared civic creed. Our Founding Fathers had a belief in the rule of law, individual liberty, free enterprise, equality and limited government. They believed in popular sovereignty. And they expected that foreign policy would foster the state’s national interests.

They saw this organization of principles and policies as unique and exceptional and welcomed the mantle of America as the “exceptional nation.”

Dueck doesn’t argue that American orthodoxy demands one-size-fits-all foreign policy. President George Washington campaigned for no “entangling alliance,” not because he was a libertarian or an isolationist, but because he recognized the danger of a young republic getting embroiled in Europe’s perpetual power struggles.

In contrast, after the Spanish-American War, President William McKinley became a reluctant imperialist, annexing the Philippines because the U.S. believed it needed a Pacific foothold to defend its Asian interests against the Japanese and the Europeans in China.

Over the years, some presidents fought wars, while others shrank from the global stage. Still, they all pursued foreign policies rooted in the basic belief of nationalism fostered by the Founding Fathers.

The big break, Dueck argues, came with President Woodrow Wilson. As Wilson watched the nation-state sink in the aftermath of World War I, he embraced internationalism as a life raft. This touched off the great, bipolar struggle for American foreign policy, pitting globalists and populists against what Dueck calls conservative nationalists, those who cling to traditional American foreign policy.

“Age of Iron” commits many pages to analyzing Trump’s first term. It concludes that, while his rhetoric may be populist, the president’s policy fits well within the scope of traditional conservative foreign policy.

Trump is neither a warmonger nor an isolationist. His game plan is to ramp up the pressure and “de-escalate on favorable terms.” He shows the other side that America has skin in the game, and is willing to protect its interests; then, if the other side recognizes our equities, he does a deal — if there is a good deal to done.

In practice, Dueck finds, Trump is doing what the vast majority of American conservatives want. They are unlikely to part ways with their president.

On the other hand, there is no guarantee about where America goes from here. The nation might well veer off into isolationism or go all globalist. But, “Age of Iron” concludes, it is just as likely that we stay on the path we are on.

That’s all to the good, Dueck finds, because he sees Trump’s formula of prudent pressure and engagement as the right mix for mixing it up in era of great power competition.