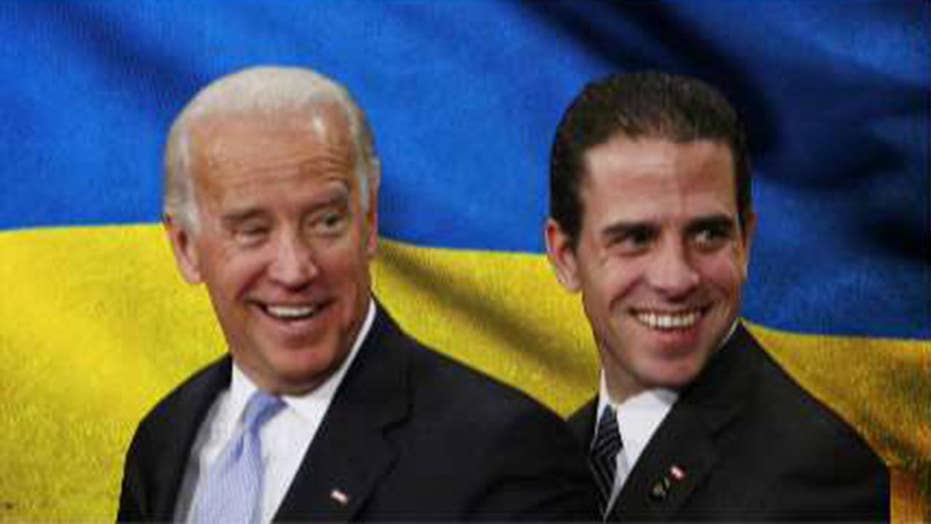 Swamp Watch: The Bidens and Ukraine

As President Trump is harassed with investigation inquiries, Joe and Hunter Biden continue to dodge an investigation of their own.

Joe Biden hit back at allegations over his son, Hunter, saying there was nothing corrupt about the firing of that Ukrainian prosecutor. But that is a total dodge.

The real scandal is not about the firing of the damn prosecutor!! -- it's about U.S. cash for Ukraine gas. It involves not just the Bidens, but former Secretary of State John Kerry and a growing number of Democratic senators as our special investigation will reveal.

These credible allegations of corruption must be investigated. Of course, President Trump is right to pursue them with Attorney General Barr, and yes, with the leader of the country where the alleged corruption took place. How can you investigate U.S. cash for Ukraine gas without involving Ukraine?

Preening news anchors ask Republicans as if they've come up with the ultimate unanswerable "gotcha." If President Trump is so hot on corruption, can you name another American who is not a political rival that he has pushed to investigate?

Can you -- to pick a name at random -- NBC's Chuck Todd -- think of another American accused of corruption at this level, who's not been investigated? The fact that Biden is running for president isn't a reason not to investigate him. It's surely the reason why the allegations must be investigated.

When it comes to Republicans, there's never any reluctance to investigate.

Just this week, two of Rudy Giuliani's associates were arrested for allegedly paying a man believed to be former Texas Republican member of Congress, Pete Sessions, $20,000 for his help in ousting our former ambassador to Ukraine who they thought was blocking their business aims.

Congressman Sessions wrote a letter to Secretary of State Mike Pompeo calling for the ambassador to be fired and the ambassador was eventually recalled.

Now, all of that looks dodgy as hell. And it's quite right that Attorney General Barr has given the green light to arrest these two men, regardless of any connection to Rudy Giuliani or the president.

If only we had the same investigative zeal on the other side. Instead, when it's a Republican who wants Democrats investigated, they try to impeach him.

Let me remind you of the details here. In early 2014, someone called Devon Archer, who is the longtime business partner of Joe Biden's son, Hunter, joined the Board of Ukraine's largest gas company, Burisma. On April 16, 2014, Archer had a private meeting with Vice President Biden at the White House late into the night, according to White House records.

Two days after that meeting, on April 18, Hunter Biden joined the Burisma Board, too; and three days after that, on April 21, Vice President Biden went to Ukraine with promises of U.S. taxpayer cash for the Ukrainian gas industry.

It's been reported that in the years following Joe Biden's April 2014 visit, his son, Hunter, was paid $50,000 a month for his Burisma Board seat. But bank records taken from an unrelated FBI raid of Devon Archer's office in 2016 showed that Biden and Archer's firm, Rosemont Seneca, received monthly payments from Burisma with sums of over $150,000, sometimes even as high as $220,000, according to Fox News contributor John Solomon.

What was it about the spectacularly unqualified and inexperienced Hunter Biden that could possibly be worth that much to a Ukrainian gas company? Well, now we know.

Burisma's founder, a shady character called Mykola Zlochevsk, used his time as Ukraine's environment minister to hand out gas licenses from which Burisma would end up profiting. By 2015, Zlochevsky found himself under investigation for abuse of power, embezzlement and other charges.

He may even have faced justice if it weren't for Hunter Biden's Burisma board seat, signaling to Ukrainian prosecutors that Zlochevsky had the backing of the American vice president who was acting like some kind of Imperial consul in Ukraine. His word was basically law.

Unbelievably, despite all the evidence of corruption, Zlochevsky came out of it unscathed. But that wasn't all that Hunter Biden's connections had to offer.

What was it about the spectacularly unqualified and inexperienced Hunter Biden that could possibly be worth that much to a Ukrainian gas company?

Remember Devon Archer, Hunter Biden's business partner? He had previously been a top fundraiser for John Kerry, who was Secretary of State at the time. And soon after Devon and Hunter joined the Burisma Board, the company channeled $90,000 to a lobbying firm called ML Strategies, which was headed by none other than David Leiter, John Kerry's former chief of staff.

That's handy because then-Secretary of State John Kerry himself has visited Ukraine with promises of U.S. aid and assistance. Well, Leiter registered as a Burisma lobbyist in mid-2014. But in the year leading up to that, he gave close to $60,000 to Democrats, including a select group of U.S. senators who would later be instrumental in pushing cash towards Ukraine's energy sector, directly in line with Burisma's interests.

He donated to Sen. Ed Markey, D-Mass., four times and to Sen. Jeanne Shaheen, D-N.H., three times. A month after the last of those donations, both Markey and Shaheen were among four senators who wrote a letter to President Obama that said, "We should leverage the full resources and expertise of the U.S. government to assist Ukraine in improving its energy efficiency, increasing its domestic production and reforming its energy markets."

What's that line in there? "Increasing its domestic production." Production of what? Wind power? Solar? Burning household waste? No, they're talking about increasing gas production, U.S. cash to Ukraine gas. And guess who benefits from that?

Actually, we don't need to guess; they told us. Here's the Burisma statement on Democrats' letter to Obama: "Burisma holdings today applauded the range of U.S. legislative support for the development of Ukraine's broad and untapped resources and an increase in transparency and good governance."

Yes, I bet they applauded it. And the value they got from the 90 grand they paid to their new lobbyist, the Democrat, political crony of their new board members, Devon Archer and Hunter Biden.

I suppose there could be an innocent explanation. I mean, Sen. Ed Markey could, for all we know, be a long-term champion of the gas industry.

Sen. Ed Markey was the Senate sponsor of the Green New Deal! He wants to shut down gas production in America. Yet he personally intervened with the Obama administration to send your tax dollars to boost Ukraine's gas production. And not just once.

Not only did he write that letter to Obama, but he sponsored multiple pieces of legislation that called for more U.S. assistance and aid specifically to help Ukraine's natural gas sector, including one that "directs the Overseas Private Investment Corporation to prioritize support for investments to increase energy efficiency, developed domestic oil and natural gas reserves and develop renewable energy sources in Ukraine."

A version of this bill became law in December 2014 and gave another $50 million for Ukraine gas and in turn, there was another donation to Sen. Ed Markey from Burisma's lobbyist, David Leiter, in 2017.

Oh, but the corruption PR agencies in the media keep telling us the following:

Jake Tapper, CNN anchor: As President Trump continues to rail against, as far as the evidence shows, baseless claims of corruption --

Chuck Todd, MSNBC host: And we don't know whether Mr. Trump's baseless charges about Joe Biden and Ukraine will make Biden a more sympathetic figure or tarnish him to the benefit of another Democratic candidate.

Nicolle Wallace, MSNBC host: There is no veracity to any of these allegations about the Bidens.

But, of course, there is veracity! We just showed you that veracity. And there's more. It turns out it wasn't just Sens. Markey and Shaheen in on this swampy cash for gas deal. We cross-referenced the Senate co-sponsors of Ed Markey's Ukraine gas bill with the list of Democrats whom Burisma lobbyist, David Leiter, routinely gave money to and found another one -- one of the most sanctimonious of them all, actually, Sen. Richard Blumenthal.

Burisma's lobbyist -- Hunter Biden's crony -- gave money to Richard Blumenthal three times in 2013. The next year, Blumenthal returned the favor by backing legislation that would directly benefit Burisma and Hunter Biden. How is any of this different from the alleged offenses for which those two Giuliani cronies were rightly arrested last week? This is the quid pro quo! This is the foreign meddling! The foreign interests buying up members of Congress, Democrat senators who have policy favors and taxpayer dollars to the highest foreign bidder.

CLICK HERE TO GET THE FOX NEWS NEWS APP

This is a massive scandal. U.S. cash for Ukraine gas. Sen. Ed Markey, Sen. Jeanne Shaheen, Sen. Richard Blumenthal, John Kerry, David Leiter, Devon Archer, Hunter Biden -- and yes, Joe Biden, who was literally presiding over all of this as it was going on -- of course, it should all be investigated.

It'll be up to our justice system to look into any criminal charges, but it's open to anyone to make referrals of suspected campaign finance violations. We reached out to and invited Sens. Markey, Shaheen and Blumenthal to come on the show, but they didn't respond.

Those payments from Burisma's lobbyists to those senators raised suspicions of money laundering and illegal foreign donations aiming to buy influence in America's democracy. The details should be sent to the Federal Election Commission. We will post them soon.

Adapted from Steve Hilton's monologue on "The Next Revolution" on Oct. 14, 2019.