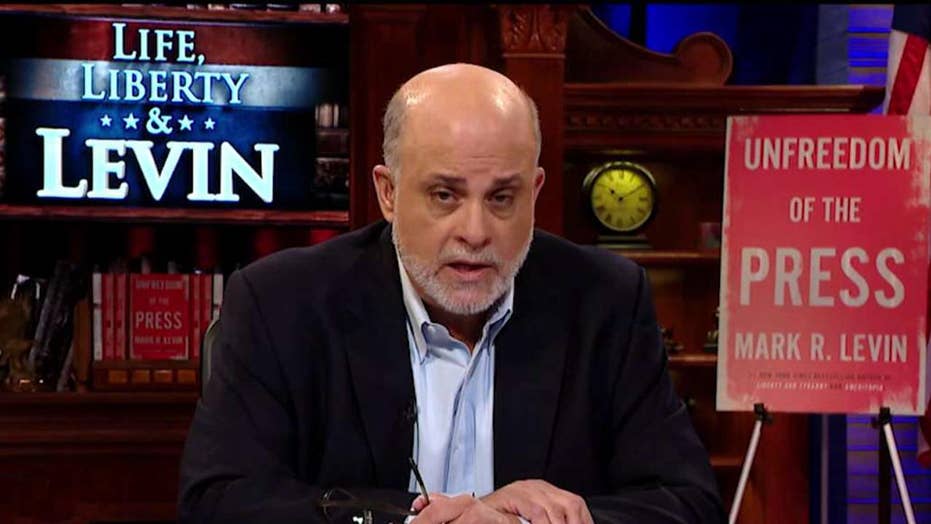 Levin: Nancy Pelosi and her politburo have gone rogue and are trying to run roughshod over President Trump

It has always seemed strange to me that Democrats so readily accepted the Steele dossier’s allegations against President Trump. Perhaps this was because my personal reaction on reading the dossier was mild amusement at how very poorly it was written and how absurd the patently “salacious and unverified” allegations sounded.

You would think Democrats and their media allies would have learned a lesson from this nonexistent “Russia collusion” debacle. But Democrats have once again unquestioningly accepted hearsay allegations from a politically biased source in the whistleblower complaint.

Perhaps strangest of all in this strangest of political times, Democrats initiated an impeachment inquiry based on these allegations before even seeing either the complaint itself or a transcript of the call to which it referred.

Though I rarely agree with House Speaker Nancy Pelosi, D-Calif., on policy, I don’t think she’s stupid. So I was puzzled by her willingness to pursue this extremely risky step without anything approaching evidence of serious wrongdoing.

I thought perhaps a combination of the pending election, the weak slate of potential Democratic presidential nominees, plus President Trump’s increasingly obvious economic success, had created political desperation so intense that Pelosi’s only choice was to take an extreme political risk.

At this point, I asked myself, what else have they got? Elizabeth Warren? A Hillary Clinton rematch? Seriously?

But then it occurred to me that this could all make sense. People tend to believe that others will do what they themselves would do if faced with similar choices. No one wants to believe other people would make choices morally superior to their own.

This certainly explains the rush to accept the Steele dossier’s absurd claims. According to The New York Times: “Fusion GPS was hired on behalf of Mrs. Clinton’s campaign and the D.N.C. by their law firm, Perkins Coie, to compile research about Mr. Trump, his businesses and associates – including possible connections with Russia. It was at that point that Fusion GPS hired Mr. Steele, who has deep sourcing in Russia, to gather information.”

Whether you call this opposition research (meaning Democrats did it) or collusion (meaning Republicans did it), it’s certainly easy to see why Democrats incorrectly believed nominee Trump would look to Russia for information that could influence the election. It was the very conduct in which the Democrats had engaged.

How about the whistleblower’s complaint? Well, again according to The New York Times, former Vice President Joe Biden “threatened to withhold $1 billion in United States loan guarantees if Ukraine’s leaders did not dismiss the country’s top prosecutor, who had been accused of turning a blind eye to corruption.” Not coincidentally, the prosecutor “was soon voted out by the Ukrainian Parliament.”

So did anyone associated with Biden benefit from his actions? Well, Mr. Biden’s son Hunter “had a stake in the outcome” as he was “paid as much as $50,000 per month” for being “on the board of an energy company owned by a Ukrainian oligarch who had been in the sights of the fired prosecutor general.”

Whether you call this fighting corruption (meaning a Democrat did it) or an abuse of power (meaning a Republican did it), it’s once again easy to see why Democrats would so easily believe that President Trump threatened to withhold foreign aid to obtain a personal benefit. It’s exactly what Democrats did under similar circumstances.

Less than one day after Pelosi announced her impeachment inquiry, President Trump discredited the whistleblower’s allegations by releasing a rough transcript of his call with Ukrainian President Volodymyr Zelensky.

The rough transcript shows that Trump did not condition foreign aid on any action by Zelensky. Zelensky has since confirmed that he didn’t feel any such pressure from Trump.

The transcript also shows that Zelensky, not Trump, brought up Trump’s lawyer Rudy Giuliani visiting Ukraine to investigate corruption. And despite incredibly biased media coverage to the contrary, the only “favor” Trump requested in the call concerned investigating foreign interference in our 2016 election – a subject that used to be of great interest to Democrats.

In reality, if someone suggested withholding aid to pressure a foreign power into besmirching a political opponent, President Trump would be the first person in the room to say “No way” – or likely something far more graphic and inappropriate to repeat here.

But much like the false “Russiagate” debacle, because of their willingness to believe President Trump would act as they would in similar circumstances, the Democrats (and their media allies) now find themselves prematurely committed to an impeachment inquiry based on the flimsiest of justifications.

I fully expect their hollow abuse of power claims to continue. They have no choice at this point. They will continue to stir up a lot of dust and when the dust settles, once again, there will be nothing there.