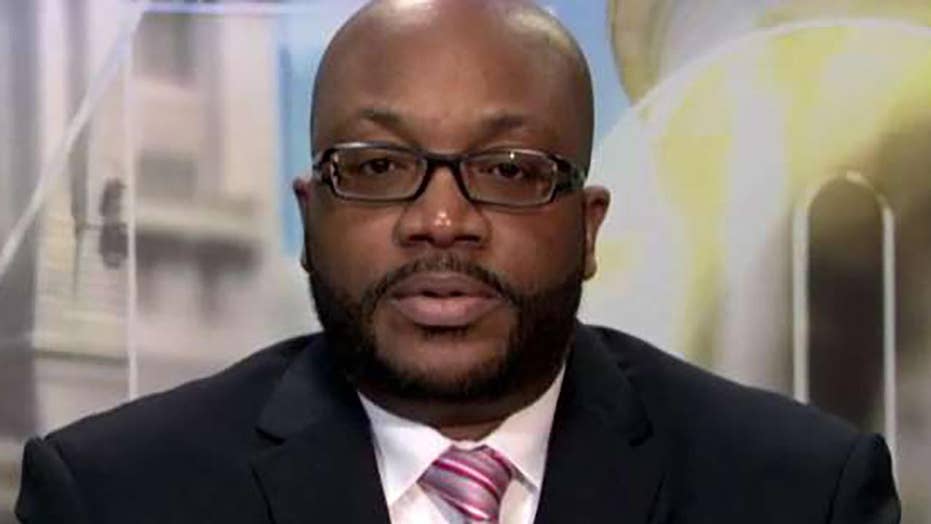 James Prince, the most respected man in hip-hop, is among the growing number of black Americans – including me – who are recognizing that President Trump has accomplished some very good things for the African-American community.

I’m one of those who have become full-fledged supporters of the president and want to see him reelected. Others, like Prince, haven’t endorsed Trump for reelection at this point, but support some of the president’s policies and appreciate what he has done.

We also recognized that while Democrats make big promises to black voters in the run-up to every election, too often those promises are forgotten once the polls close. In part that’s because Democrats take our votes for granted – they just assume the vast majority of black people will vote Democratic. If more of us voted for Republicans, candidates in both parties would do more to compete for our votes.

EX-NFL STAR JACK BREWER: WHY TRUMP POLICIES ARE SECRETLY LOVED BY MOST LIBERALS (EVEN IF THEY WON’T ADMIT IT)

Yet too often, black supporters of President Trump and other Republican candidates are looked down on by many of our fellow African-Americans as sellouts or Uncle Toms – as if voting for Democrats was a requirement for being considered authentically black in America today. This is ridiculous.

White people vote for both Democrats and Republicans, and no one questions their “whiteness” based on who they vote for. So why should being black have such a strong association with voting for Democrats?

I know it was a long time ago, but let’s not forget that Abraham Lincoln was a Republican, and the biggest supporters of segregation in the South before the civil rights movement reached full strength were Democrats.

Fortunately, President Trump appears to be picking up well-deserved support in the black community.

We don’t know how that black support today will translate into votes in the presidential election a year from now, but Trump clearly has a good shot at getting a bigger share of the black vote than the 8 percent he received in 2016.

For 35 years Prince has worked to promote Houston's rap scene and rap artists and he’s now working to help build a better future for underprivileged neighborhoods and the people who live there.

Prince may be best known for his discovery of the music phenom Drake, who recently wrote the forward to Prince’s book “The Art and Science of Respect.”

In the black community, Prince is feared by many and respected by just about all. Many rappers talk a big game in their lyrics, but they all kiss the ring of J. Prince. For this reason, Prince’s favorable comments about President Trump deserve our attention.

Prince has shown that hip-hop culture does not belong to the Democratic Party. I grew up in Texas embracing this culture, keeping the music of Ghetto Boys, UGK, 8 Ball and many of my other favorite Southern rappers on repeat. The music covered a lot of topics, but the Democratic Party wasn’t one of them.

Hip-hop culture definitely had its flaws with the glorification and promotion of sex, drugs and alcohol. But the one thing that it always represented was respect. That is something every American deserves.

President Trump can take credit for many achievements that have benefitted the black community.

The president’s tax cuts, elimination of unnecessary government regulations, and other policies have driven black unemployment and the black poverty rate to record lows. These policies have sparked a renaissance in manufacturing and other jobs that has benefitted not just black Americans, but all Americans.

And the many Opportunity Zones the president has created in low-income and predominantly black areas have revitalized areas neglected under Democratic administrations.

The president has also advocated for school choice that has given students in underperforming public schools the option of attending schools where they can get a better education. Many of the students benefitting from school choice are black.

In addition, President Trump has increased support for the nation’s historically black colleges and universities, which continue to play an important role in the education of young black men and women.

Prince focused on the First Step Act in commenting favorably about President Trump on social media.

Trump signed the First Step Act into law in December 2018. The law allows non-violent convicts to get out of prison earlier and reenter society as productive members of their communities.

Black people benefitted disproportionately from this long-overdue reform that reversed the “get tough on crime” policies of Democrats in years past, which led to mass incarceration.

In a heartfelt statement, J. Prince wrote the following about the president’s signing of the First Step Act into law: “20 years ago my friend and brother got a life sentence by the Federal System with a release date of 2087. A lot of things have taken place between then and now so you can only imagine how much we will have to catch up on.

“Loss of time is something you can never get back but the time that we have now and moving forward is so important. That brings me to the law that was recently passed called First Step Act which is the reason my homie as so many others are being freed from the bondage of racism which is what caused them to get such an astronomical amount of time in the first place.

“There is a question mark in my mind and so many others on why the Democrats didn’t pass this law when they claim they represent the people. This First Step Act was signed off by Trump, a Republican President. The truth is the truth and facts are facts. With that being said I don’t care who don’t like it.”

While J. Prince may be the most culturally respected black voice to speak out in support of Trump policies, Kanye West deserves a lot of credit for being brave enough to be one of the first.

Trust me, I know how much courage this takes, as I confessed to the world in an op-ed why I voted for Donald Trump in 2016.

Now a group called Black Voices for Trump has formed and launched a campaign in November to get the truth out about what President Trump has done for the black community and to help the president boost his share of the black vote.

The president flew to Atlanta to speak to several hundred people attending the group’s launch event.

“The Democrats have let you down,” President Trump said. “They’ve dismissed you. They’ve hurt you. They’ve sabotaged you for far too long.”

Look for more prominent black Americans to urge more people in the African-American community to take a clear-eyed look at the candidates for president in 2020.

I think if more people from my community approach President Trump with an open mind and look at his record, more will support him for reelection. That’s a good thing. Democrats shouldn’t expect to get our votes automatically.

Black Americans finally have a president who is delivering on his promises to us with results our ancestors dreamed about. Now it’s time to use common sense to embrace President Trump’s policies over his personality.