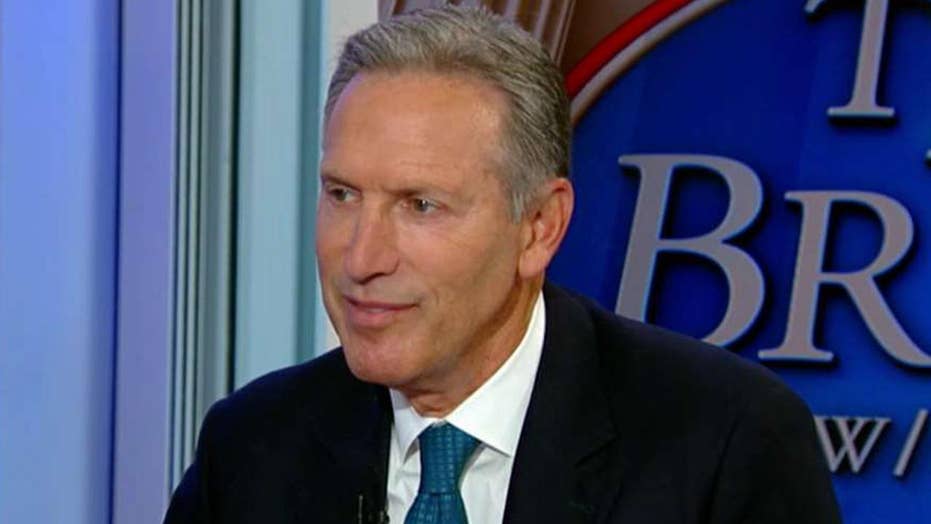 Former Starbucks CEO Howard Schultz says that if he launches an independent White House run it is more likely that lifelong Republicans would vote for him than Democrats.

Mike Allen, the well-wired reporter for Axios, says Democrats are beyond being furious at Howard Schultz, the former CEO of Starbucks. Allen is “hearing threats of boycotts and social isolation, attacks on Starbucks, and emotional, insistent lobbying of his advisers.”

The anti-Trump talking heads and liberal consultants are terrified at the mere thought that an “independent centrist” presidential candidate like Schultz would draw some votes from a liberal Democratic nominee running against President Trump in 2020.

Democrats claim that third party candidates such as Ross Perot and Ralph Nader have swung elections in the past.

Jim Messina, Obama’s 2012 campaign manager, goes so far as to say Schultz should “spend this time and money doing something that won’t ruin the world.”

So Schultz, a lifelong Democrat who nonetheless thinks some ideas like excessive debt and the cost of entitlements should be up for debate, has gone overnight from being viewed on the left as an innovative business hero to a partisan piñata

Let’s calm down and look at the evidence that Howard Schultz is an enemy of democracy.

“It’s not at all clear – in my opinion – whether an Old Rich Business Guy running a 3rd party bid would be more likely to hurt Trump or to help him. People are assuming the latter but not really presenting much in the way of proof,” said Nate Silver, founder of the election website FiveThirtyEight, which has a good track record of prognostication. “If you think Ross Perot and Ralph Nader belong in the same category you probably ought to be doubting yourself a lot more.”

“But at a practical level, (Anderson) was simply another option for frustrated voters who had already decided not to back Carter for another term,” Kornacki concluded. “Polls found Anderson voters nearly as likely to list Reagan as their second choice as Carter.”

In 1992, Texas mogul Ross Perot won an astonishing 19 percent of the vote against Bill Clinton and incumbent President George H.W. Bush. Many people concluded that Perot cost Bush the election by siphoning off conservative voters.

But Kornacki cites exit polls that found Perot voters were equally split on who they would have voted for as a second choice.

Even the epic story of how Ralph Nader’s campaign as the left-wing Green Party candidate in 2000 wound up destroying Al Gore’s dream of the White House is more complicated than the conventional wisdom would have it. While Nader did win 100,000 votes in the decisive state of Florida – which Republican George W. Bush ultimately won by only 537 votes – there are caution flags in drawing any conclusion from that.

Following Schultz’s announcement, FiveThirtyEight’s Silver pointed out that Nader wasn't cut from the same centrist cloth that Schultz has woven his campaign from.

“Nader hurt Gore because he was a leftist 3rd party candidate,” Nate Silver notes. “The centrists didn’t affect things much.” He cites exit polls showing that Gary Johnson (2016), Perot (1996, 1992), and Anderson (1980) all drew about equally from both major party candidates.

But there’s one last thing that the blowtorch critics of Howard Schultz forget. If in the fall of 2020 the former Starbucks CEO finds himself depleted of electoral caffeine and trailing badly in the polls he can always pull the plug if he thinks Trump is indeed a greater danger to his values than the Democratic nominee.

Note that Ross Perot pulled out of the 1992 race against George H.W. Bush and Bill Clinton in July of that year (he later bizarrely parachuted back into the race that October).

Some of Schultz’s most fervent supporters believe Schultz is unlikely to invest heavily in a clearly losing effort. Andrew Caiano, a New York businessman, told the Washington Post that if Trump looks like he would win in the home stretch of the 2020 election, he thinks Schultz is “going to back out before that happens.”

If that’s true, the roasting of Howard Schultz isn’t just about a fear that Donald Trump might be assisted a bit by an independent candidate. It may represent a fear by liberals that his voice will be a powerful rebuke to any overly left-wing Democratic nominee.

Rather than engage in overheated denunciations of Howard Schultz, Democrats might be better off viewing him as a warning signal that if they really want to beat Donald Trump and outflank any independent challenge they should consider running a more moderate candidate.