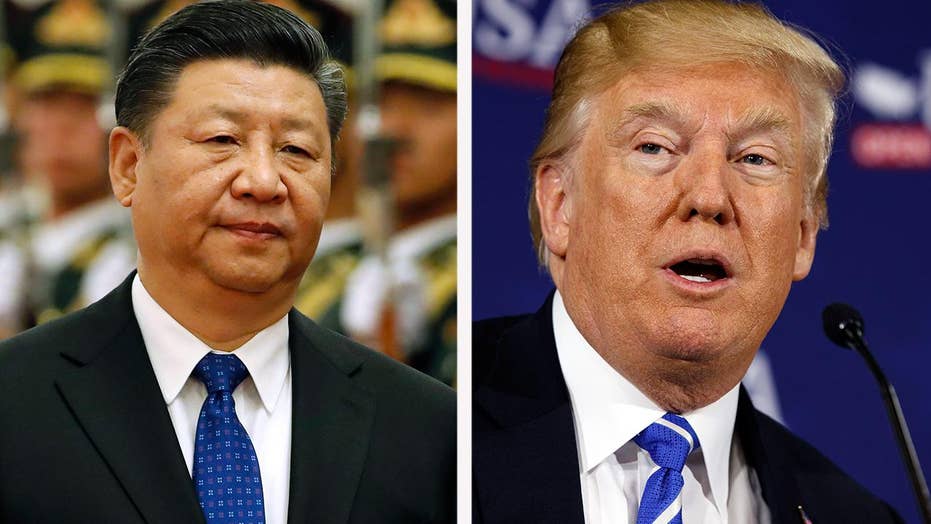 Wallace on politics of Trump's trade showdown with China

President Trump does not take on small tasks—confronting North Korea after predecessors kicked the can, reforming taxes and business regulations and now America’s corrosive trade deficit.

Nothing he does is without drama—repeatedly shaking up the White House staff, personal legal troubles, and tariffs that aggravate allies and the moribund WTO.  Yet, the economy has proven resilient— stocks notwithstanding,  consumer confidence and business activity are strong, and forecasts for economic growth in 2018 are close to 3 percent.

To keep his promise to resurrect communities decimated by globalization, he has to do a lot more to address America’s flood of imports than slap tariffs on aluminum and steel.

Reawakening shuttered factories in the vast expanse between Manhattan and the Silicon Valley requires halving the $650 billion trade gap. That’s what it will take to sustain growth in excess of 3 percent, bring in tax revenues to tame budget deficits and rein in foreign borrowing that threatens another financial meltdown.

Otherwise, the Democrats will take back control, and we know what their brand of economics does to working class Americans—diminished lives, opioid addiction and the indignity of government charity.

China accounts for more than 60 percent of the trade gap, and it’s not cheap labor that’s harpooning American industry.  Beijing has been carefully guiding investment toward mid-technology activities like auto parts and targeting high tech industries like microprocessors and artificial intelligence—the latter is increasingly abundant in new products across a broad span of new products.

For those, Beijing’s mercantilism is key—vast subsidies, high tariffs and a myriad of administrative barriers to imports that compel U.S. firms to invest in China to sell there, forced joint ventures on U.S. firms establishing facilities in China that virtually guarantee technology theft and state-directed industrial espionage.

Competing with China is like playing football against a team outfitted with guns and knives.

Enforcing U.S. trade laws and relying on the WTO is hardly an answer. The U.S. has imposed more than 150 antidumping and subsidy duties, but WTO rules require riffle shots—narrowly focused measures that hardly match the breath and systemic scope of Chinese commercial aggression.

WTO rules were written to police the protectionism of governments overseeing market economies and are not well applied to a central authority puppeteering state owned enterprise and private firms with substantial communist party participation in their management.

Once again, China and the United States are engaged in discussions to permit more U.S. exports and stop the abuse of American MNCs investing there. And once again Beijing is floating limited, as opposed to comprehensive reforms—and without credible enforcement.

If China is not more forthcoming, the Trump administration is readying another set of unilateral measures. Some make sense—for example, imposing restrictions on Chinese investments in American technology sectors that mirror those imposed on U.S. firms in China—but others don’t.

We have learned that targeted trade actions don’t change Beijing’s behavior. Chinese exporters find ways around those—for example, by routing goods through third counties, either cleverly disguised or incorporated into other products.

And Beijing can easily retaliate against Mr. Trump’s targeted tariffs by levying duties on U.S. agricultural products like pork, sorghum and soybeans from states that went for Mr. Trump in 2016. Causing discomfort for China’s unelected President Xi is more difficult.

It would be better to prepare broad measures aimed at rebalancing trade if China will not provide a specific timetable and credible measures to eliminate the trade deficit.

The United States could require licenses to import Chinese goods. Exporters could be issued resalable import permits equal to the value of their sales in the Middle Kingdom. Those wishing to purchase items from China would then bid for these through an online marketplace—similar to eBay. Those would be purchased by those businesses and consumers placing the highest value of products from China.

Phasing in this regime over three years would give businesses time to adjust but still create crises for Beijing policymakers and the WTO. That’s what it’s going to take to reorder our relationship with China and reform the WTO.