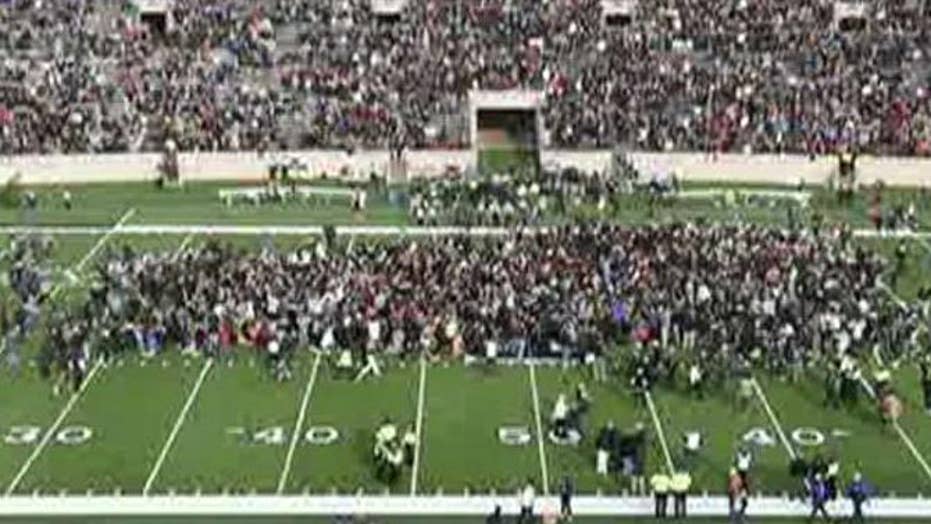 Over 150 protesters caused a 48-minute delay at the Harvard-Yale football game after they stormed the field demanding both schools stop funding fossil fuel companies.

A growing number of seemingly incongruous stunts are interrupting our lives. In Washington, D.C. protestors this past September parked sailboats in major downtown intersections because nothing says “stop climate change” like preventing people from commuting to work.  Other protesters have glued themselves together in the U.S. Capitol Building.

This past weekend hundreds of students, alumni and faculty, stormed the field at the Harvard-Yale football game demanding action on climate change.  Bad enough to watch Harvard and Yale play football, now add to that the feigned outrage of the climate mob, and you’ve got yourself one lousy Saturday.

The privileged communities at Harvard and Yale, just like the privileged elite of Hollywood, live in the great American bubble. Electricity works. Water flows. Planes, trains, and automobiles whisk us away to work and vacation. We buy wine from France and olive oil from Italy and without hesitation. There are meat and fish at the market, and even our vegan friends have alternatives all made possible because of abundant, inexpensive, domestic, reliable fossil fuels. Whereas that should spark a sense of gratitude (after all, it is almost Thanksgiving) in the mind of the climate warrior it sparks guilt, and guilt demands action.

A favorite phrase of the environmental left: demand action. This past week a group of action demanders stormed Speaker of the House Nancy Pelosi’s office demanding action and threatening a hunger strike.  A few weeks ago protesters poured red paint over the famous Bull statue of the New York Stock Exchange at a “die-in” demanding action.

For the privileged, first-world American elites who have all the convenience, comfort, and prosperity of our powerful, fossil-fuel-rich economy, climate change is the perfect, hollow, cause.

How defacing art (with petrochemicals) advances the cause is unclear.

Climate change is the preferred issue of privileged protestors. It’s perfect: nameless, faceless, easy to incorporate hatred for “capitalism” or “the corporations.” There’s even the rage of identity politics without having to ask hard questions.

For the privileged, first-world American elites who have all the convenience, comfort, and prosperity of our powerful, fossil-fuel-rich economy, climate change is the perfect, hollow, cause.

It makes sense the protest audience is growing.

As detached from reality as the paint pourers and the hunger strikers are the Harvard-Yale football protestors. Sure, I could point out the obvious benefits of fossil fuels, but that would be an exercise in futility.  The elite universities have no space for what they deem “right-wing.”  At Yale, 75 percent of the faculty identify as liberal while only 7 percent identify as Conservative.  At Harvard, the split is even more egregious: 80 percent to 1 percent.

By the way, both universities praise “diversity” in their mission statements.  But you already knew that…

The virtue-signaling disruption at the football game will accomplish nothing. I think it’s safe to assume both Ivy League universities’ dorms will be toasty warm this winter and properly cooled come summer.  Their students’ laptops will be fully charged and WiFi connected.  Their cafeterias will be fully stocked and their campuses will be fully lit.  And many protestors will “study abroad” overseas unaware or indifferent to the men and women in the energy industry who make it all possible.  -- Whose jobs they think should be eliminated.

The silliness of the Harvard-Yale football protest did succeed in raising some awareness.  It made most of America aware that elites think they get to interrupt your life with their social justice posturing.  And their safe location choice made us aware these phony activists would never try to stop the football game between Ohio State and Michigan.