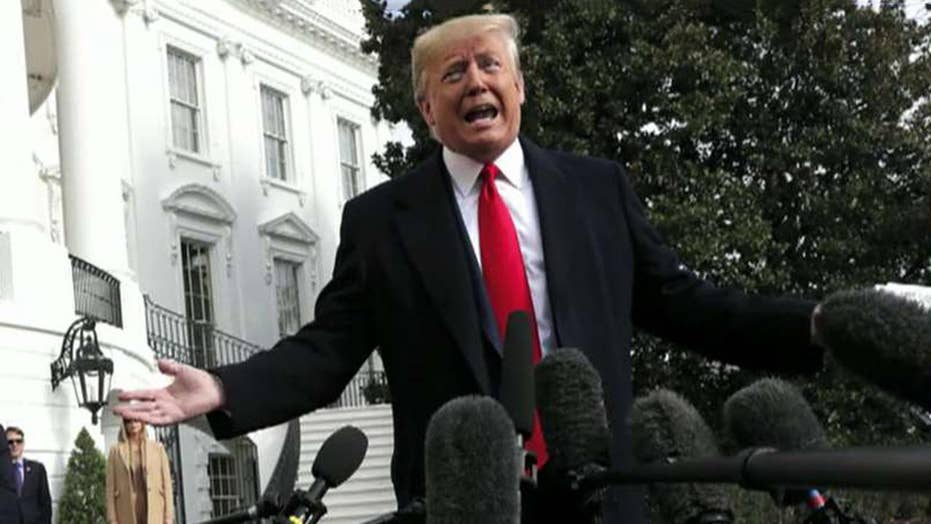 Trump slams impeachment spectacle, scorches Dems after a week of public testimonies; reaction and analysis on "The Five."

Newsflash: Rep. Adam Schiff is dithering over impeachment! On CNN’s “State of the Union” Sunday, the House Intelligence Committee chairman claimed that grounds for impeaching President Trump are “not contested” but also said he wants to “discuss this with my constituents and colleagues before I make a final judgment on this.”

Jake Tapper, the show’s host, asked how the leader of the House impeachment drive could possibly waiver. Schiff responded that he wanted to be sure that impeachment based on the evidence collected was what “the founding fathers had in mind.”

Uh-huh. More likely, Schiff is panicked that his unfair inquiry has been a complete flop for Democrats. The public is turning against the drive to boot President Trump from office, causing speculation that Democrats will shy away from an official vote to impeach.

ANDREW MCCARTHY: HOW SIGNIFICANT IS REPORT ON FBI SURVEILLANCE OF TRUMP CAMPAIGN AIDE?

Trump added to that speculation, telling the hosts of "Fox & Friends" on Friday that he didn’t expect House Speaker Nancy Pelosi to authorize such a vote. Given the inability of Democrats on the inaptly named Intelligence Committee to produce a compelling case, some think Pelosi might instead consider a vote to censure the president.

If Democrats walk away from impeachment now, Schiff and his enablers will not just have egg on their collective faces, they will have an entire omelet.

Not happening. If Democrats walk away from impeachment now, Schiff and his enablers will not just have egg on their collective faces, they will have an entire omelet. After two years of trying but failing to prove that Trump’s campaign had colluded with Russia, Democrats dove all-in on his purported misbehavior in Ukraine. To abandon their zealous prosecution (some would say persecution) of the president now would be devastating.

Fundraising has exploded for the GOP, with the Republican National Committee reporting it hauled in $25.3 million during October and had $61.4 million in the hopper at month's end.

In contrast, the Democrat party machine brought in a mere $9 million. At the end of last month, the Democratic National Committee was $7 million in debt and had only $8.7 million in the kitty.

Politico reports that Democrats in Trump-won districts, anxious the impeachment drive is destroying their reelection prospects, are begging for help from the national committee. The GOP has unleashed a slew of ads targeting vulnerable Dems, with little response so far.

Guess what? The DNC is running short on ammo.

While early surveys indicated widespread support for the investigation into Trump’s commerce with Ukraine, the tables have turned.

Displeasure with the impeachment push is also showing up in the polls. While early surveys indicated widespread support for the investigation into Trump’s commerce with Ukraine, the tables have turned. A recent Emerson poll shows 45 percent of voters oppose the impeachment push while 43 percent support; a month earlier 48 percent supported impeachment and 44 percent were against it. Perhaps more significant for Democrats hoping to regain the White House in 2020, support among independents has nosedived. Some 34 percent approve of the push today, down from 48 percent in October.

The Emerson poll is not an outlier. An NPR/Marist poll also shows support for impeachment dropping over the past month and, even worse for the showboating Schiff, interest in the proceedings waning. Only 30 percent of the nation saying they were following the proceedings “very closely,” down from 37 percent in September.

Adding insult to injury, Trump’s approval rating has actually gone up, not down, over the past month. And, the stock market keeps hitting new highs.

Notwithstanding these obvious red flags, Democrats are now preparing to take their case to the Judiciary Committee, chaired by the wobbly Rep. Jerry Nadler, D-N.Y. Act one for Nadler was overseeing the hearings that featured Robert Mueller, after the special counsel concluded that the Trump campaign did not collude with Russia.

In advance of those hearings, Nadler told Chris Wallace on "Fox News Sunday" he hoped “it won't end up being a dud.” It was worse than a dud; Wallace later claimed it was a “disaster for the Democrats and I think it's been a disaster for the reputation of Robert Mueller.”

That’s what we have to look forward to, as the Judiciary grabs the baton from the Intel Committee. They could call for more witnesses and more testimony. They may convince someone like former National Security Adviser John Bolton to appear, who might deliver new proof of wrongdoing by Trump. Otherwise, given the public’s growing disenchantment with the proceedings, Democrats would be crazy to prolong their misery. Voters have made up their minds.

The Judiciary Committee is set to review a yet-to-be-written report by Schiff’s group, and will probably deliver articles of impeachment to the House in short order. In an unprecedented move, that body will likely vote exclusively along party lines to impeach the president. Then, the case will move to the Senate. Trump has said he wants a full-blown trial, which would allow Republicans to call witnesses like the infamous whistleblower and perhaps Hunter Biden. This would be a horror for Democrats.

The GOP could dredge up plenty of unpleasantness about former Vice President Joe Biden’s son, and possibly about issues such as why a high-ranking Ukrainian politician gave millions of dollars to the Clinton Foundation while Hillary Clinton served as secretary of state.

Republicans would be smarter to fast-walk the process through the Senate, where, given the GOP majority in that chamber, Trump will prevail on a vote to impeach. The GOP occupies the high ground, with an aggrieved president who has plenty of accomplishments to tout on the campaign trail. Including, being exonerated on both Russiagate and Ukrainegate. Voters are tired of looking backwards.

Meanwhile, Democrats will have to contend with a base disappointed at a failed impeachment thrust; a front-runner, Biden, who is tainted by the appearance of Ukraine self-dealing; billionaires trying to buy victory in their primary even as progressives rail about the evils of "Big Money" in politics; a booming jobs market lifting up minorities and low-income Americans; and the radical left, which is undermining the party’s appeal in must-win states.

Republicans should relax. Democrats are doing everything possible to secure another four years for President Trump.