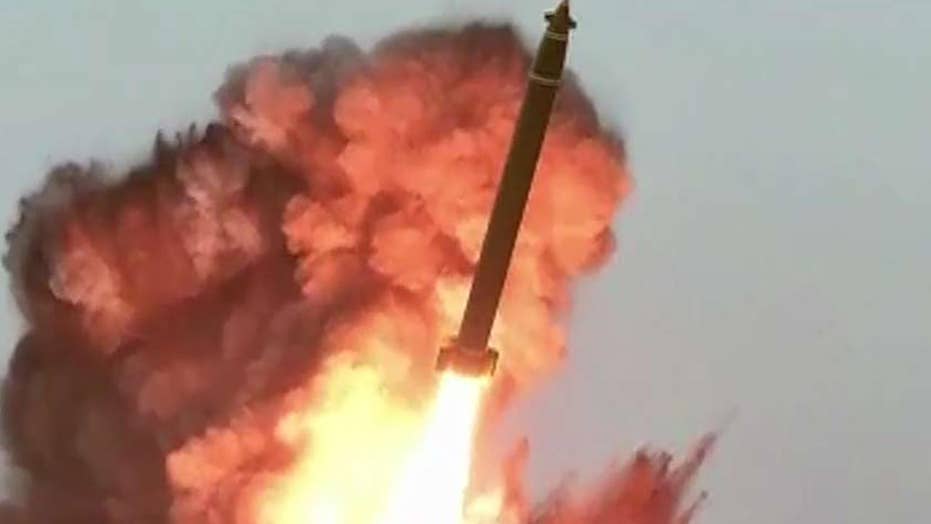 While Democrats in Congress remain focused on their drive to impeach President Trump, challenges facing the U.S. around the world are getting a lot less attention then they deserve. One major challenge looming in the next few weeks comes from nuclear-armed North Korea, which test-fired two short-range missiles on Thanksgiving.

Unfortunately, it looks like another nuclear showdown with North Korea is just over the horizon. A lot of you reading this will find this puzzling, because many people thought the three summits President Trump and North Korean dictator Kim Jong Un held in the past two years had ratcheted down the tension between our two nations.

And what about the personal relationship forged between Trump and Kim? Hasn’t that put the relationship between the U.S. and North Korea – while certainly not one of friendship – at least on a stable footing?

Not for long, at least if Kim has his way. North Korea seems set to apply its own style of maximum pressure on the U.S. to match the maximum pressure of economic sanctions America and most of the rest of the world have imposed on the North.

The sanctions imposed by Trump and previous presidents – as well as the United Nations and other individual countries – are designed to get the North to abandon its nuclear weapons and long-range missile programs. Kim has made gestures but has never agreed to full and verifiable denuclearization.

The North Korean leader has repeatedly declared a year-end deadline for some sort of big progress on now-stalled negotiations with the U.S. And the end of the year is approaching fast.

North Korea’s demands have shifted several times over the last few months. For now, what Kim is demanding is clear: before his regime sits down for any new talks with the Trump administration on possible North Korean denuclearization, Kim wants America to end its so-called “hostile policy.”

Ending the “hostile policy” means U.S. support for the cancellation of most – if not all – of the crippling international economic sanctions on North Korea. In addition, Kim wants some form of a security guarantee against any attack by the U.S., South Korea or other nations against the North.

Kim has also been clear about what happens if Trump does not meet his demands. Going back to his New Year’s Day annual speech this year, Kim declared that if America “attempts to unilaterally enforce something upon us [full nuclear disarmament before any sanctions relief] and persists in imposing sanctions and pressure against our Republic, we may be compelled to find a new way for defending the sovereignty of the country.”

That so-called “new way” can mean only two things: a long-range missile test proving definitively that North Korea can hit the U.S. with a nuclear weapon, or a new test of a nuclear bomb to remind the world of the horrific destruction North Korea has the power to unleash on other nations – including the U.S.

This sounds aggressive and frightening, potentially leading Washington and Pyongyang back to the dark days of nuclear threats and conflict. However, I would argue that Kim never intended for such an outcome when he delivered his New Year’s address 11 months ago.

Instead, Kim likely gambled that a little pressure would help push the Trump administration to agree to a deal that was more on his terms. And in fact, earlier in the year, there was reason to be hopeful that a potentially historic compromise could be struck.

With Trump needing to ensure he wins a vote in the Senate during his likely impeachment trial, he doesn’t want to lose any Republican votes over a foreign policy issue such as North Korea.

But Kim forgot about one thing: the blood sport that is now U.S. domestic politics has limited President Trump’s ability to agree to any sort of compromise.

At the Hanoi summit in February, Trump could not agree to a compromise deal as Democrats tried to torpedo the talks by having Trump’s personal attorney, Michael Cohen, testify at the same time.

And now, with Trump needing to ensure he wins a vote in the Senate during his likely impeachment trial, he doesn’t want to lose any Republican votes over a foreign policy issue such as North Korea.

Some senators in both parties remain upset about Trump’s sudden withdrawal of U.S. troops from northern Syria who were protecting Kurds from Turkish forces, which entered Syria after the U.S. troop withdrawal. If Trump angers senators again by making too many concessions to North Korea, some Republicans whose support he needs in an impeachment trial might turn against him.

But how serious are Kim’s threats? Will he pull the missile or nuclear trigger? We know he must do something in early January, as he has publicly declared his intention to shift to a more aggressive posture.

The good news is that Kim has a way out of the crisis he unintentionally set into motion. He does not have to test a long-range missile or nuclear weapon, the two things that drove tensions to such a dangerous place in 2017. Kim has made a personal pledge to Trump to refrain from such actions.

Kim could test a medium-range missile or even conduct a satellite launch, something that would allow him to show his resolve and not lose face to his own people. He could then declare his openness to new talks – even another summit – if Trump would be open to a compromise.

Here is where impeachment could for once help the Trump administration. Let’s assume Trump is impeached by the Democratic-controlled House and acquitted in a trial in the Republican-controlled Senate, which now seems a near certainty.

Clearly the president and his advisers will want to change the political landscape in Washington with one last big achievement before the 2020 election. What if Trump then pivoted to foreign affairs, focusing on a nuclear deal with North Korea?

Trump, free from the political straitjacket of impeachment, would have the ability to make key compromises – like trading some sanctions relief for the closure of one or more important North Korean nuclear sites as well as some sort of security guarantee for Pyongyang.

But all of this can’t happen if Kim decides to test an intercontinental ballistic missile or nuclear bomb. President Trump would be forced to respond to such a provocative action – and that can only mean we will be back to the days of what Trump once called “fire and fury.”

The good news is that none of this needs to happen if Pyongyang takes a softer approach and is truly serious about forging a new relationship with Washington.

What will Kim Jong Un choose to do? We’ll have to wait and see.