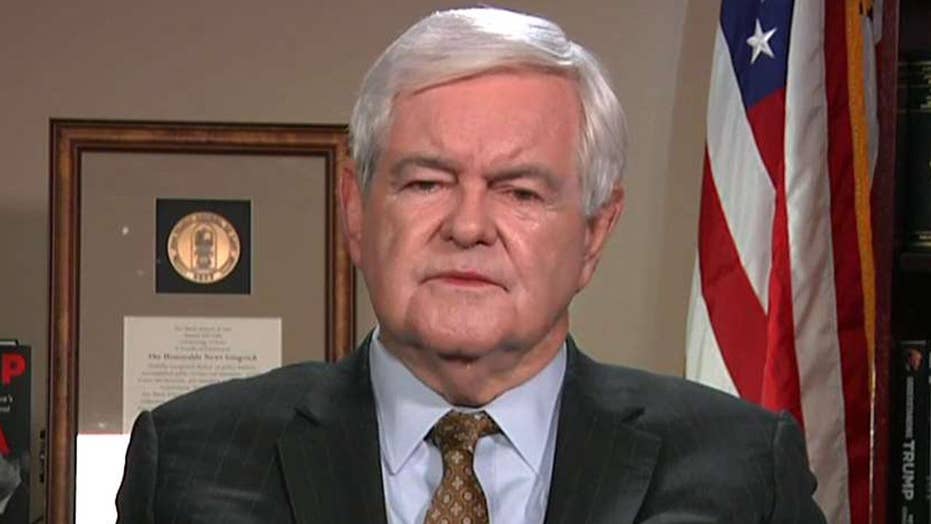 Gingrich: Founders did not see impeachment as a political tool

Former House Speaker Newt Gingrich says Democrats' case to impeach President Trump falls so far below what the Founding Fathers would have considered impeachable that it's 'almost a joke.'

House Speaker Nancy Pelosi and the Democrats' tunnel-vision focus on impeaching President Trump puts all of us, as Americans, at risk.

This may sound extreme, but I lay it all out in this week’s episode of "Newt’s World."

Since the day Trump was elected president, Democrats have been formulating and executing the plot we have been watching unfold. After Trump won a massive electoral majority, Democrats started digging.

They have been determined to find something – anything – they can use to attack him. The central focus of all of this is to describe and define Trump as a corrupt president so often that people begin to accept the narrative. It’s not only the elected Democrats. Much of the intelligence community has been equally determined to “uncover” something on President Trump from the beginning.

In my judgment, the liberal national news media is mindlessly repeating this narrative. Many in the media are implicitly biased against President Trump – but even those who are not are helping the Democrats by giving their message airtime, print real estate and attention.

As this plot against Trump has continued, the American system has been bypassed, ignored, or misused to the point where it has been put it in jeopardy. Democrats, political operatives, American intelligence officials and the media have been forcing a manufactured narrative on the American people. Specifically, a group of these intelligence officials are breaking the law by leaking secrets to the media (whose members gladly overlook these crimes so long as it lets them accuse the president of something new).

We have seen this pattern with the so-called Trump Towers in Moscow scandal, the Robert Mueller investigation, and now the Pelosi-Adam Schiff impeachment effort.

Make no mistake: This is not politics as usual. It’s a concerted effort by one political party, the Washington bureaucracy, and the media to overrule the American people.

This week on "Newt’s World" I spoke with Lee Smith, author of "The Plot Against the President: The True Story of How Congressman Devin Nunes Uncovered the Biggest Political Scandal in U.S. History." Smith has done perhaps the most comprehensive job yet of shedding light on this massive effort to undermine the American political system.

I hope you will listen this week and help us combat this plot against the president.