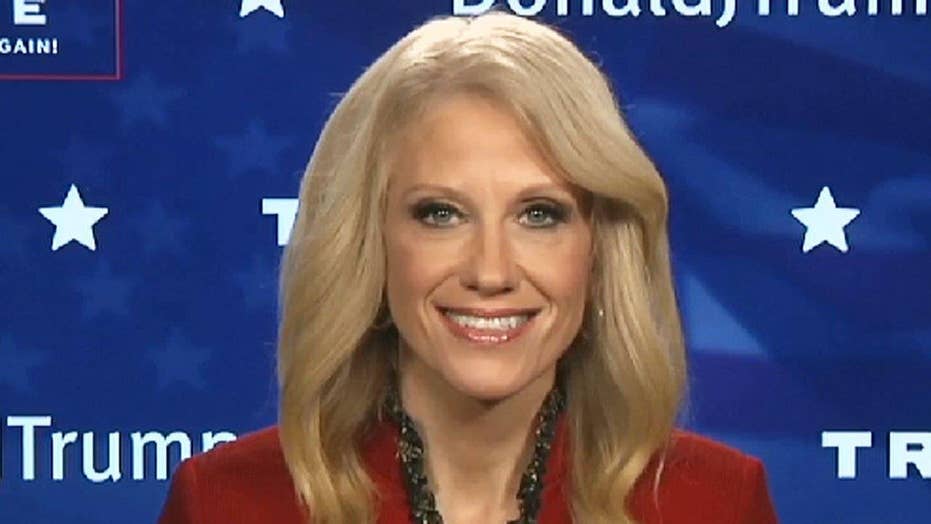 Conway on Trump's 'unconventional presidency' with the press

On 'Hannity,' the president-elect's senior adviser slams the press for still being in campaign mode

President-elect Donald Trump continued his beatdown of the abusively biased, alt-radical left mainstream media this week, calling out the press that openly colluded with the Clinton campaign and tried to undermine his candidacy every single step of the way.

On Tuesday, the president-elect met with The New York Times, just a day after a closed-door dressing down of network executives and anchors from CNN, MSNBC, NBC, ABC and CBS News. Fox News executives were in attendance, but they wouldn't comment since it was an off the record briefing.

"We're in a room full of liars, the deceitful, dishonest media who got it all wrong,” Trump told the gathering at Trump Tower, according to the New York Post.

Trump reportedly took direct aim at CNN president Jeff Zucker, calling everyone at the network liars and saying Zucker should be ashamed of himself.

The president-elect didn't stop there. He reportedly hit NBC News for its coverage of his campaign and slammed ABC News's Martha Raddatz, who was brought to near tears on air election night.

I'm sure some in the room had their little feelings hurt, but really, who cares? Didn't they deserve every bit of what Trump said to them? Keep in mind, some of these so-called unbiased journalists laughed off Donald Trump and said he never stood a chance years before he even decided to run for president. And they each had to eat their words.

As for President-elect Trump’s meeting with The New York Times, I'm sure the self-described “paper of record” was trying to smooth things over with Mr. Trump, and gloss over its unrelenting negative coverage of his campaign.

Mr. Trump should keep in mind that a few days before this meeting the Times praised former Obama adviser and current CNN contributor Van Jones as a "star" of the 2016 campaign. That would be the same Van Jones who was a member of the alt-radical left and who viciously attacked Donald Trump on a consistent basis throughout the campaign.

Jones even called Trump’s stunning victory a “whitelash,” a made-up term intended to inject a bogus racial element into support of Trump.

“Oh, this is a really sad night,” Jones said on CNN as it became clear that Trump would be our 45thpresident. “I'm just going to say it. This is a very sad night for the country. You can't polish this turd.”

In 2008, I said journalism was dead, but this election showed it was far worse than any of us ever thought. WikiLeaks exposed rampant collusion between the media and Hillary Clinton's presidential campaign. We now know that interim Democratic National Committee chair Donna Brazile, while working for CNN, gave the Clinton campaign debate questions in advance. That's called cheating.

CNN was soliciting the DNC for questions to ask Donald Trump, Ted Cruz and Carly Fiorina during their interviews. Reporters asked the Clinton campaign for approval before publishing their stories. One, a star reporter from Politico, even referred to himself as “a hack” while doing it. Other so-called journalists allowed the Clinton campaign to edit quotes.

Over at CNBC, John Harwood was offering the campaign advice and bragging about going after Trump in a debate that he was moderating. And worst of all, WikiLeaks exposed how dozens of journalists from every major news organization except Fox News were invited to be wined and dined at Clinton Campaign Chairman John Podesta's house.

Donald Trump should keep all of this in mind. The media already had its chance to cover him fairly and honestly. They blew it. And in my opinion, it's time to reevaluate the press in this country, and maybe it's time to change the traditional relationship that the press will have with the White House.

Until members of the media come clean about colluding with the Clinton campaign and admit that they knowingly broke every ethical standard that they're supposed to stand and uphold, they should not have the privilege and responsibility of covering the president on behalf of you, the American people.